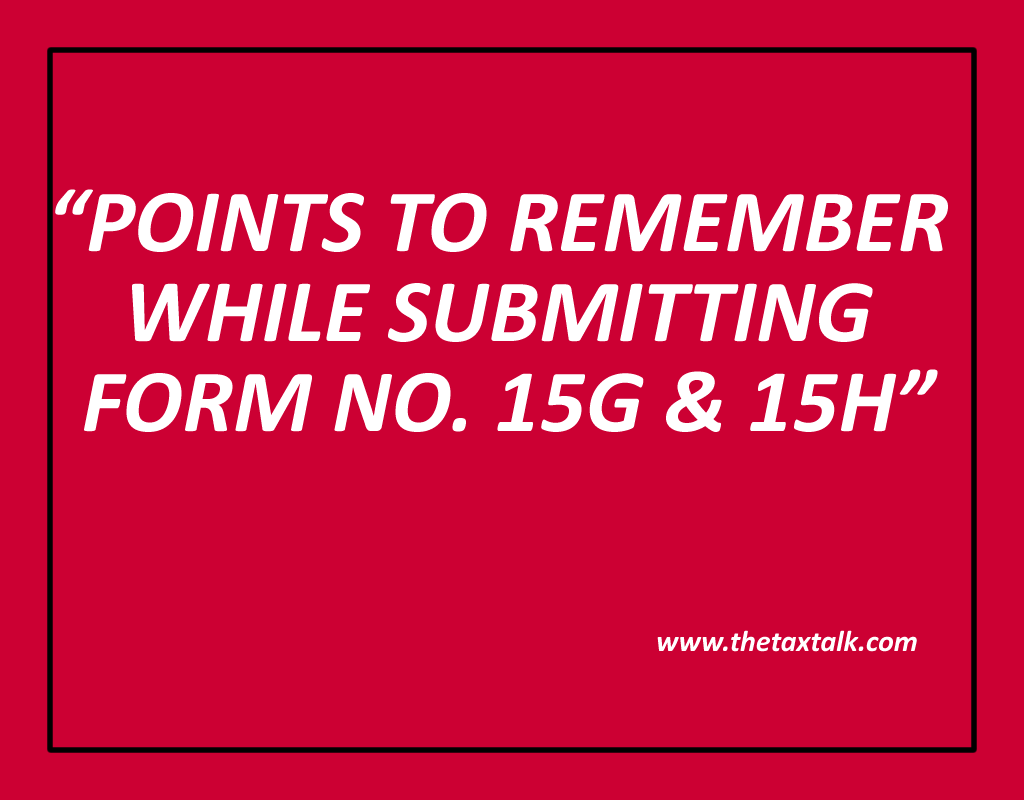 There are lot of confusion even in bank employees about form 15G and 15H like which form is to be taken? from whom? When & where to submit? What are the normal precautions one should take while taking the form? Will you please elaborately discuss this issue in your esteemed columns of the newspaper & oblige. [kaushikpopat@gmail.com & others]

Very often, readers keep enquiring about the submission of forms No. 15G/15H to the banks or others payer so that interest could be received without deduction of tax at source (TDS). In this column, I am covering all about Form No. 15G & 15H and hopefully the detailed elaboration hereunder would provide a comprehensive picture about the submission of Form No. 15G & 15H.

What is Form 15G/ H and its relevance:

TDS is nothing but tax paid in advance on behalf of the payee and credit for the same can be claimed by the payee at the time of filing the income tax return. However, TDS can be avoided by the payee by submitting declaration form No. 15G/15H. These forms have to be filed in duplicate and once the payer (bank, post office, company etc) takes them on record, the entire interest is to be paid to the depositor / lender without TDS.  There are certain precautions one should take while submitting these forms. Filing a wrong form without being eligible to do so would be illegal and could involve payment of interest on the tax payable and also attracts penal consequences. The conditions under which Form 15G and 15H may be filed are almost similar yet there is a significant difference which needs to be noted carefully. In routine course, lot of taxpayers end up filing one of these forms when they are not eligible to do so and vice versa.
The main difference between Forms 15G and 15H is that Form 15G is meant for non-senior citizens whereas Form 15H is meant for senior citizens only.

First and foremost only, a person who is resident in India can submit form No. 15G. NRI cannot submit this form. To be eligible to furnish Form 15G, the non-senior citizen needs to fulfill the following two conditions:

If both these conditions are satisfied, Form 15G may be furnished to the payer & entire interest income could be received without any TDS.

Any resident individual, who is above the age of 60 years or has completed the age of 60 years at any time during the financial year, can submit form No. 15H provided his tax liability on the basis of his estimated income is nil. Unlike form No. 15G, this form can be submitted by the senior citizen even though the total interest amount from the payer may exceed Rs. 2.50 Lacs (i.e., the limit of basic exemption limit).

Difference between form 15G and 15H:

I hope that from the above discussion, it may be clear that you need to comply with certain conditions to be eligible to file form No. 15G or 15H. Moreover, you need to take certain precautions while filing these forms with the payer.