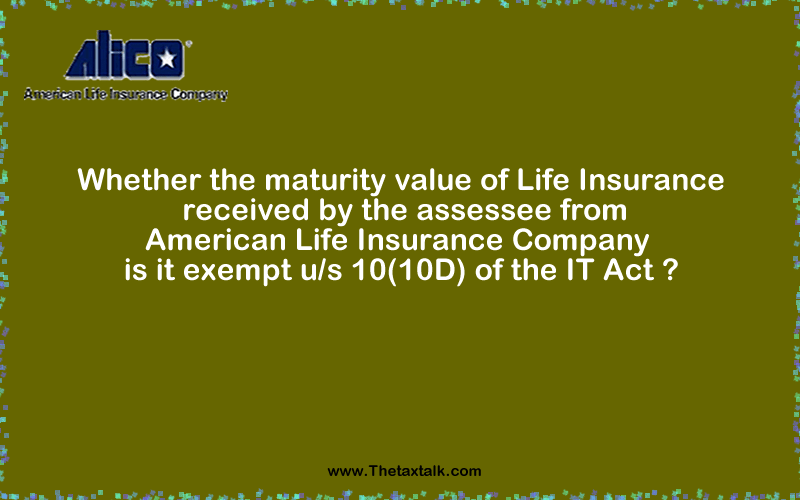 Sanjay R Parikih by the Assessee. : R K Jalali by the Revenue.

A. On the facts and circumstances of the case and in law, the learned Income Tax officer erred in law in interpreting the personal effects i.e. capital receipts as revenue receipts received by your appellant for maturity of Life Insurance Policy and by adding the same while computing the Total Income. Your appellant therefore request your honor to direct learned Income Tax Officer to delete the said addition in toto amounting to Rs.4,16,200/-

B. On the facts and in the circumstances of the case and in law, the AO erred in levying and calculation U/s 234B and 234C of the Act.

C. The appellants reserve the right to amend, alter, add aforesaid ground of appeals as they may think deem fit by themselves or by their representative.

3. The only issue arising for our consideration and adjudication is whether the maturity value of Life Insurance received by the assessee from American Life Insurance Company taken by the husband of the assessee is exempt u/s 10(10D) of the IT Act or otherwise not liable to be taxed being capital receipt.

3.1 The assessee received a sum of US $ 9441.98 from National Bank of Abu Dhabi which is equal to Rs. 4,16,200/-. The Assessing Officer asked the details for the said receipt for which the assessee submitted that the amount received is on account of maturity of insurance policy taken by the husband of the assessee from American Insurance Company in Abu Dubai. The Assessing Officer taxed the said receipt in the hands of the assessee by holding that the provisions of sec. 10(10D) of I T Act are not applicable because the policy was not taken from any Indian Life Insurance Company as per section 2(28BB) of the I T Act.

5.2 On the other hand, the ld DR has relied upon the orders of the authorities below and submitted that the tax concession is available only on the Life Insurance policy taken from Indian Insurance Companies namely LIC or any other company registered under the provisions section 2 of Insurance Act, 1938. He has referred the definition of Insurer as given in section 2 (28BB) and submitted that even in the case of Private Insurance company, the same should be an Indian company as defined under clause 7 of sec 2 of Insurance Act.

“10(10D) any sum received under a life insurance policy, including the sum allocated by way of bonus on such policy, other than;

(b) any sum received under a Keyman insurance policy; or

(c) any sum received under any insurance policy issued on or after the 1st day of April 2003, in respect of which the premium payable for any of the years during the term of the policy exceeds twenty per cent of the actual capital sum assured;

Provided that the provisions of this sub clause shall not apply to any sum received on the death of a person;

7.1 From the bare reading of the provisions of sec. 10(10D), any sum received under Life Insurance Policy is eligible for exemption, except in case of exceptions as culled out under clause (a)(b)& (c). It is not the case of the revenue that the assessee falls under any of the exemption as enumerated in clause (a)(b)& (c) of sec. 10(10D). The question before us is in a narrow-compass as to whether any sum received under the Life Insurance policy taken from a non Indian insurance company is eligible for deduction u/s 10(10D) or not. The lower authorities have given much stress on the definition of term ‘insurer’ and as provided under sec. 2(28BB) as under:

”Insurer” means an insurer, being an Indian Insurance Company, as defined under clause (7A) of sec 2 of the Insurance Act, 1938(4 of 1938), which has been granted a certificate of registration under sect 3 of the that Act.”