Whether proceedings under the Income-tax Act,1961 has to be kept in abeyance once an order u/s 14 of the IBC code is passed? 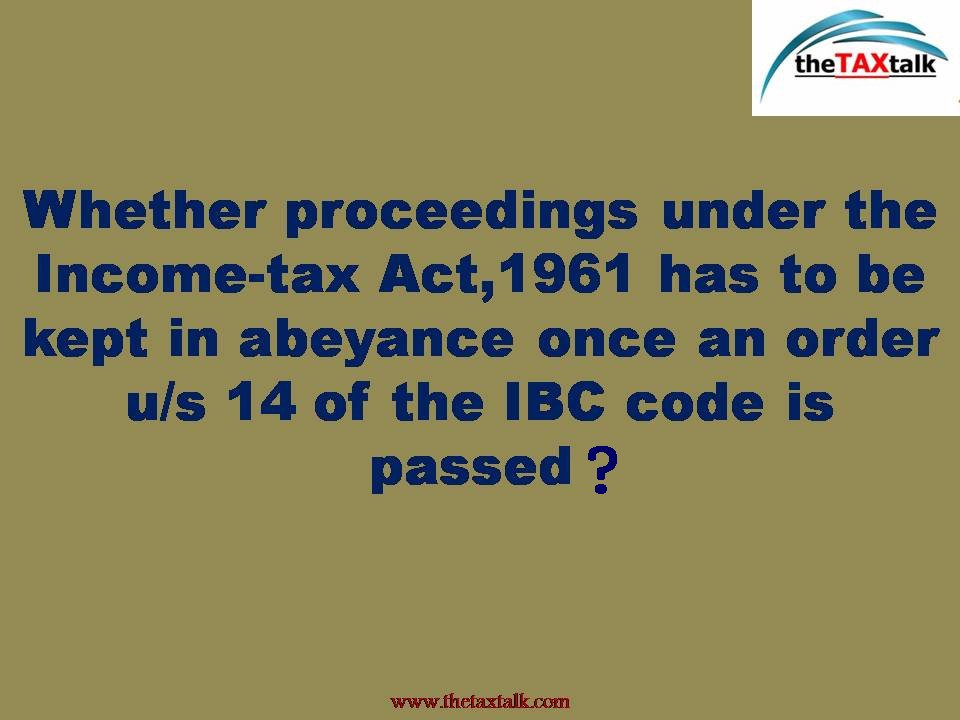 Whether proceedings under the Income-tax Act,1961 has to be kept in abeyance once an order u/s 14 of the IBC code is passed?

The issue in the case of Srei Equipment Finance Limited Vs Additional/Joint Commissioner of Income-tax(Calcutta high court) vide order Dated 10th May 2022 were as under:

The Division bench of Calcutta High Court in this case was considering appeal against dismissal by Single Bench Judgement of Hon’ble Justice Nizamuddin where the Ld Judge dismissed the appeal and also imposed personal cost of Rs 10000/- on Advocate Somak Basu,for alleged misbehaviour with the court. However, there was not an iota of hint as to what was the misbehaviour. Moreover , no opportunity was given to explain such alleged conduct.

The Division bench upon hearing the said Advocate as well as Senior Advocate JP Khaitan held that opportunity of personal hearing must be meaningful and not an empty formality and exchange of message in chat box cannot be said to be the personal hearing or opportunity of natural justice which is to be granted in terms of catena of judicial decisions. Finally the Court relying on the decision of the Apex Court in the case Alchemist ARC quashed the assessment order which was passed relegating the same to the AO to be kept in abeyance till the CRP is passed.

Regarding the cost imposed on the advocate, the Court extensively dealt with this issue and relying on the decision of the Supreme Court in the case of Neeraj Garg Vs Sarita Rani & Ors (2021) 9 SCC 92(SC) where in a similar situation the Court had held that condemnation of the counsel without giving him an opportunity of being heard would be a negation of the principles of audi alteram partem. The requisite degree of restraint and sobriety expected in such situations was also found to be missing in the offending comments. Finally the court ordered expunging the remark against the advocate as well as the cost of Rs 10000/- was vacated.

This is one the finest judgement in relation to the principles of natural justice and may have repercussion in various other cases.