Whether Income Tax department can take the data of other clients of a CA / Auditor in case of search of one particular clients? 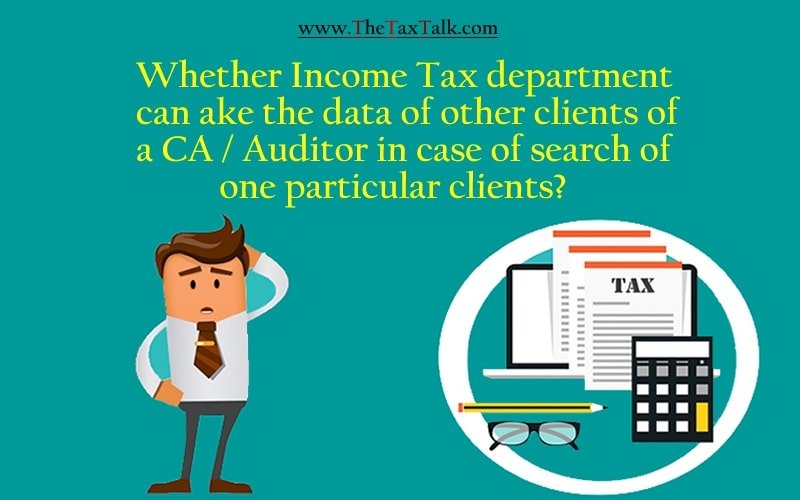 Whether Income Tax department can take the data of other clients of a CA / Auditor in case of search of one particular clients?

Delhi High court in the case of S.R. Batliboi & Co. vs Department Of Income [W.P.(C) 9479/2007 & CM 9520/2008] has held that an indiscriminate search frustrates the whole scheme of Section 132 and emasculates the protective measures against these draconian powers.

Key observation by the court was as under:

Para 8: The section does not confer any arbitrary authority upon the Revenue Officers. The Commissioner or the Director of Inspection must have, in consequence of information, reason to believe that the statutory conditions for the exercise of the power to order search exist. He must record reasons for the belief and he must issue an authorisation in favour of a designated officer to search the premises and exercise the powers set out therein. The condition for entry into and making search of any building or place is the reason to believe that any books of account or other documents which will be useful for, or relevant to, any proceeding under the Act may be found. If the Officer has reason to believe that any books of account or other documents would be useful for, or relevant to, any proceedings under the Act, he is authorised by law to seize those books of account or other documents, and to place marks of identification therein, to make extracts or copies therefrom and also to make a note or an inventory of any articles or other things found in the course of the search. Since by the exercise of the power a serious invasion is made upon the rights, privacy and freedom of the tax-payer, the power must be exercised strictly in accordance with the law and only for the purposes for which the law authorizes it to be exercised. If the action of the officer issuing the authorization, or of the designated officer is challenged the officer concerned must satisfy the Court about the regularity of his action. If the action is maliciously taken or power under the section is exercised for a collateral purpose, it is liable to be struck down by the Court. If the conditions for exercise of the power are not satisfied the proceeding is liable to be quashed. But where power is exercised bona fide, and in furtherance of the statutory duties of the tax officers any error of judgment on the part of the Officers will not vitiate the exercise of the power. Where the Commissioner entertains the requisite belief and for reasons recorded by him authorises a designated officer to enter and search premises for books of account and documents relevant to or useful for any proceeding under the Act, the Court in a petition by an aggrieved person cannot be asked to substitute its own opinion whether an order authorising search should have been issued. Again, any irregularity in the course of entry, search and seizure committed by the officer acting in pursuance of the authorization will not be sufficient to vitiate the action taken, provided the officer has in executing the authorization acted bona fide.

Para 17: It is our considered opinion that the same privilege of confidentiality must extend to auditors as well. The decision of the High Court striking down unbridled power sought to be given in Section 73 of the Stamp Act was affirmed by the Supreme Court. This ratio can logically be extrapolated upon the facts of the present case to conclude that the Revenue is not empowered to make use of material stumbled upon by its officers in a Search conducted against a third party. The extracted paragraph from Canara Bank particularly calls for reproduction:-

The complete copy of the order is produced hereunder for the benefit of the readers:

“The learned counsel appearing on behalf of the respondent submits that as per his instructions he would like to argue the matter with regard to de- sealing of the laptops and having access to the data in the laptops. He submits that to ascertain as to whether the data relates to EMAAR-MGF, the entire data available on the laptops would have to be examined. On the other hand, the learned counsel for the petitioner submits that the data concerning EMAAR-MGF is available on different and distinct files and has nothing to do with its 47 other clients. We had suggested that the laptops be de-sealed and the data be examined by the Assessing Officer in the presence of representatives of the petitioner as well as of the assessee. It was also suggested that the entire inspection of the data on the laptops be done without copying the data in any form for the purposes of informing the Court as to which files were connected with EMAAR-MGF and would be required by the Assessing Officer. Unfortunately, this suggestion is not acceptable to the respondents though the petitioners had accepted the same. Consequently, this matter would have to be heard. The learned counsel for the petitioner requests for some other date for advancing arguments inasmuch as today the respondents were only to report as to whether the suggestion was to be carried out or not”.

275B. If a person who is required to afford the authorized officer the necessary facility to inspect the books of account or other documents, as required under clause (iib) of sub-section(1) of section 132, fails to afford such facility to the authorized office, he shall be punishable with rigorous imprisonment for a term which may extend to two years and shall also be liable to fine.

It has not been pleaded nor have we been informed as to whether or not notice required by Section 132 has been served upon the Petitioner. We have no alternative but to presume against the issuance of the notice. That being so, resort to Section 275 B becomes otiose. As will be seen sundry safeguards have been put into place by the Legislature before such an inquisition can be commenced. It is important to clarify that so far as this provision is concerned it contemplates only access to and not seizure of the books or material since seizure is dealt with in Section 132(1)(iii). A Notice dated 17.9.2007 is Annexure P-2 to the Petition. It does not refer to any provision of the Act, but the Written Submissions appear to indicate that it is predicated on Section 131 of the Act.

153C. Assessment of income of any other person.

(iib) require any person who is found to be in possession or control of any books of account or other documents maintained in the form of electronic record as defined in clause (t) of sub- section (1) of section 2 of the Information Technology Act, 2000 (21 of 2000), to afford the authorised officer the necessary facility to inspect such books of account or other documents;

(iii) seize any such books of account, other documents, money, bullion, jewellery or other valuable article or thing found as a result of such search:

Thus, sub-section 132 (1)(iib) casts a compulsion on the owner of the laptops to provide the Department with the password to the computer to enable inspection of the Books of Account maintained in electronic form in the laptops. The authorized officer of the Department may, after inspection of the documents, seize such documents and Books of Account obviously connected with the Assessee in respect of whom steps under the other parts of Section 132 have been initiated.

It appears plain to us, therefore, that for a search or seizure to be legal it should not be firstly ordered for malafide, extraneous or for oblique reasons. Secondly, it must be predicated on information received by the Authority who would have reason to believe that it is necessary to conduct such an operation. Thirdly, it should not be in the nature of a roving or fishing exercise. These three factors must be observed rigorously and even punctiliously since the exercise of such powers invariably result in a serious invasion of the privacy and freedom of the citizen. However, search and seizure operations may not be illegal if the seized documents pertain to transactions of allied concerns, since they would have a bearing on the case of evasion of income tax by the assessee concerned. CIT -vs- Jawahar Lal Rastogi, 1970 (2) SCC 225 mandates that if the seized material is to be retained beyond 180 days it must be supported by good and adequate reasons which have received the approval of the Commissioner. Although, the warrant of authorization need not specify the particulars of documents and books of account, an indiscriminate search or seizure is not postulated by the Act. Form No.45 and 45A and Rule 112(2) which seek to effectuate the purposes of Section 132(1) of the Act reinforce the distillation of the law articulated above. To justify search and/or seizure it is essential that (a)there must exist information which is laid before the Commissioner as a consequence of which he has

(b) reason to believe that it is expedient to issue summons to produce books of accounts or other documents specified therein, which summons must (c) be addressed to a particular person, which formality obtains even in the case of money, bullion jewellery etc. that has not been declared;

(d) specific particulars of the place where the above items are believed to be available must be indicated. All these rigorous formalities are indicative of the intention of Parliament that the extremely harrowing experience of Search or Seizure made available under the Act must be particular to the named person and be confined to the mentioned place. If this is applicable to all and sundry it would infract and nullify the fundamental rights of the citizen (third or unconnected party) concerned.