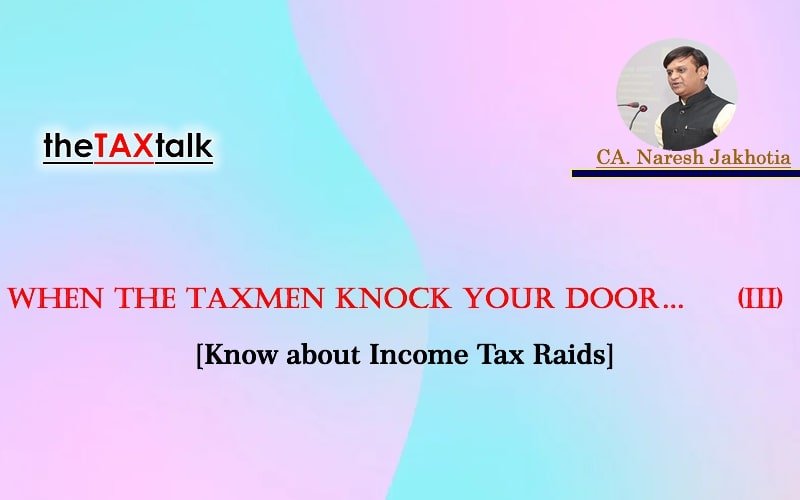 When the Taxmen Knock Your Door…(III)

In the earlier issues of the TAX talk, we have discussed the powers of taxmen to surprisingly knock the door of taxpayers by way of Income Tax Survey. Let us know about Income Tax Search & seizure, most commonly referred to as ‘Income Tax Raid’ in common parlance.

‘Search’ means a thorough inspection of the person, building, place, vehicle, vessel, aircraft. ‘Seizure’ means taking possession thereof. It may be noted that even income tax survey conducted u/s 133A for the limited purpose of gathering information can also be converted into search and seizure action u/s 132 if the records & circumstances demand so.

The obvious purpose is to unearth the black money, documents & records related to illegal transactions. Income tax authorities are empowered to carry out the raids if they have reason to believe that:

iii.  Any person is in possession of money, bullion, jewellery or other valuable article or thing representing, income or property which has not been disclosed or would not be disclosed for purposes of the Income-tax Act.

An analysis of the few raids in the recent years gives following instances which can be considered as a trigger point:

How does it happen?

Various income tax officers are involved in the process of income tax raid which is divided into multiple smaller teams. Mostly in the morning, such teams strikes at all the places of residence, office, go down/factory etc of the taxpayers, directors, family members etc. Normally, income tax raids continue for 2-3 days which may be extended further if the situation warrants. If required, consequential surveys may be done instantly on other close associates, relatives, friends, also.

What is done in Income Tax Raids?

The Income-tax Act gives very wide powers to an authorised officer to carry out the search and also to seize documents and unaccounted assets. Investigation team usually checks cash, stock, jewellery, other assets, books of accounts, computers, files, loose papers, records, other documents etc as found in the premises. Statement of the taxpayers, management and other persons present in the premises is also recorded. Normally, use of telephones and mobiles during raids is not allowed by the department. The authorized officer has the power to:

The authorised officer is also permitted to pass orders placing prohibition on the person in possession or control of the valuable article or thing from removing, parting with or otherwise dealing with such article or thing without prior permission. The authorised officer also has the right to demand the services of any Police officer or any officer of the Central Government.

What taxpayers must know during Income Tax Raids?

The taxpayers must know the following as far as income tax raids is concerned:

Duties of the Taxpayers during Income Tax Raids:

Charter of rights and duties of persons searched which has been reported in [1994] 208 ITR (St) 5. Some significant duties of the taxpayers during income tax raids are as under: