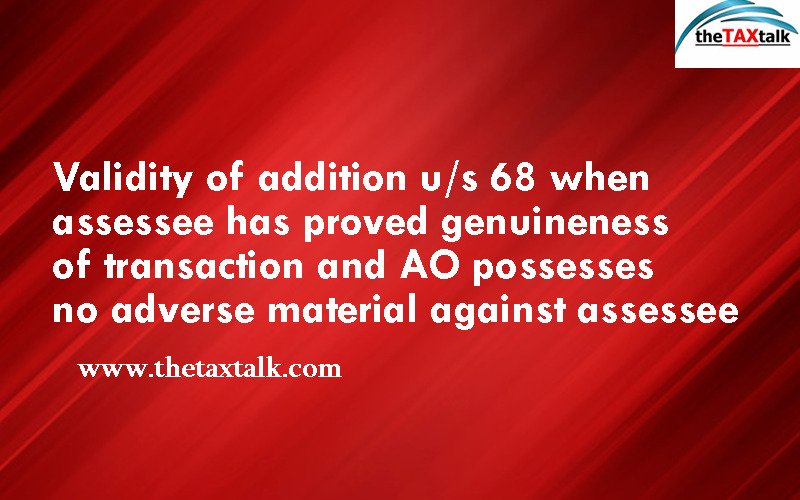 Regarding share application money received from Directors, AO held that genuine transaction of subscriber stood satisfactorily explained. Regarding share application money for sum of Rs. 2 crores received from Omexpo, assessee had filed copy of confirmation along with documents such as PAN, bank statement of subscriber company, copy of ITR along with audited accounts, etc., statement from MCA website showing that company was live working company.

AO himself carried out inquiry from parties and notice u/s 133(6) was sent asking for various details to corroborate assessee’s stand. After detailed discussion, AO concluded that sum received from Omexpo was not genuine transaction and made addition u/s 68. As CIT(A) deleted the addition, Revenue filed present appeal.

On Appeal, the issue before ITAT was whether AO cannot make addition u/s 68, when assessee has proved genuineness of transaction and AO possesses no adverse material against assessee.

Omexpo had replied to notice issued by AO and not only confirmed the transaction but also explained source of investment along with required set of documents. Bank statement furnished by Omexpo reflected a transfer of Rs. 1,00,00,000/- on two occasions from its bank account to that of assessee.

Omexpo also stated that it assessed to tax I-T and had duly reflected the investment in balance sheet. CIT(A) had also noticed that Omexpo had sufficient source of funds in form of share capital and reserves as per balance sheet.

Out of the funds, investment was made in assessee company. Besides, CIT(A) gave a categorical finding that there was no cash deposit in bank account of share subscriber prior to issue of funds.

Further, discrepancy in number of shares subscribed by Omexpo was reconciled along with share certificate filed before CIT(A).

Assessee had discharged entire onus by furnishing all relevant documents. Even in inquiry conducted by AO, no adverse material was found as party had provided all necessary details to prove transaction’s genuineness.

Hence, there was no reason why AO had doubted transaction without any adverse material found during course of inquiry.

Simply because Director of subscriber company did not appear personally it did not mean that all other documents sent by company, mostly statutory and I-T records, would make the transaction fictitious.

Thus, there was no infirmity in CIT(A)’s finding while deleting the addition. Subsequently, AO, based on information emanating from search in some other case, had concluded that amount received from Omexpo was an accommodation entry and again added the same amount despite noting fact that CIT(A) had deleted the same addition.

If same addition had been made again, there was no justification for challenging the addition in present appeal. CIT(A)’s order in deleting addition of Rs. 2,00,00,000/- was upheld.

AO cannot make addition u/s 68, when assessee has proved genuineness of transaction and AO possesses no adverse material against assessee.