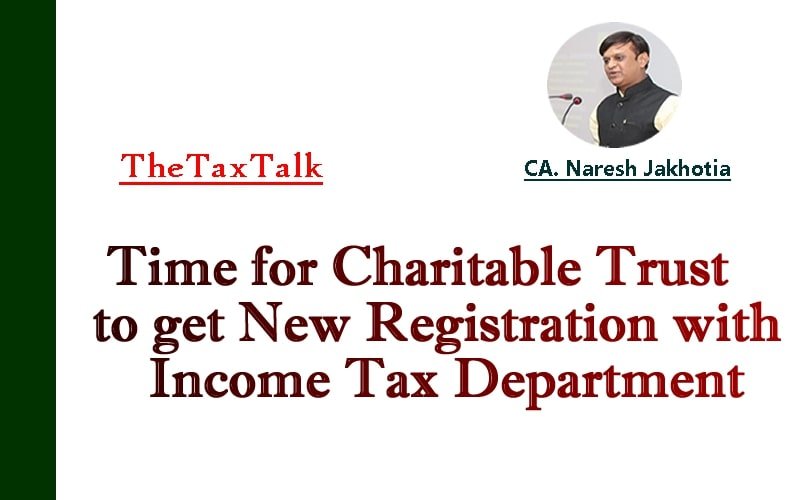 One of the sectors where substantial changes are carried out by the Government is with regard to the taxation of charitable trust, NGO & other institutions which are claiming tax exemptions. Charitable trusts & other institutions were earlier required to get income tax registration or approval u/s 12A, 12AA or u/s 10(23C). Now, this provision for registration and renewal has been changed drastically with effect from 01.04.2021. Let us know about the key changes proposed in this regard to this:

New Regime:
a) All the existing Charitable Trusts and other Institutions registered u/s sections 12A, 12AA or 10(23C) will have to apply afresh for registration under the new provisions of sections 10(23C) or 12AB on or before 30/06/2021.
b) Fresh registration will be granted for a period of 5 years only. As against registration or approval which is currently granted for perpetuity (until revoked by tax authority). In short, now registration will be there for a limited period of 5 years at any one point of time. All the Trusts/Institutions which are claiming exemption u/s 10(23C) or 11 will be required to renew the registration & approval every 5 years.
c) Where a Trust or Institution has made modification in its objects and such modifications do not conform with the conditions of registration, application has to be done again with the designated authority within 30 days from the date of such modification.

[Note: Existing Form 10A has been replaced by new Form 10A]

Though all above changes were made applicable from 1st June, 2020, the pandemic delayed its applicability to 1st April, 2021. Undoubtedly, the new regime will ensure better accountability & transparency for trust of large magnitude. But for trust of small size, it will be an additional complex & tedious compliance burden. Most of the Trustees of the smaller charitable Trusts are rendering honorary service & such cumbersome compliance would make the noble task difficult. It would have been better if small trusts, say of total turnover up to Rs. 25 Lakh, are relieved from the new compliance burden. Apart from Ease of living and ease of business, the focus of the law maker should have been on “Ease of Charity” as well.

Save
Tags: Time for Charitable Trust to get New Registration with Income Tax Department
Share Link: