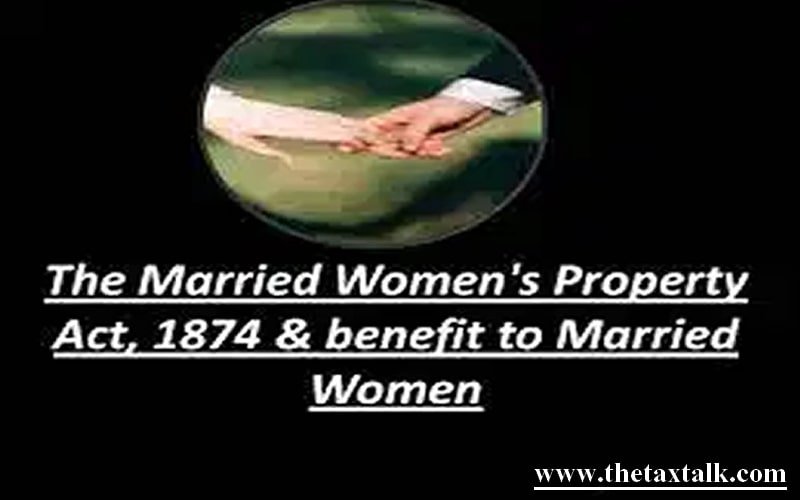 1 Short title:- This Act may be called the Married Women’s Property Act, 1874.

2 Extent and application:- 1 [It extends to the whole of India except the State of Jammu and Kashmir .] 2 But nothing herein contained applies to any married woman who at the time of her marriage professed the Hindu, Muhammadan, Buddhist, Sikh or Jaina religion, or whose husband, at the time of such marriage, professed any of those religions. And the 3 [State Government] may from time to time, by order, either retrospectively from the passing of this Act or prospectively, exempt from the operation of all or any of the provisions of this Act the members of any race, sect or tribe, or part of a race, sect or tribe, to whom it may consider it impossible or inexpedient to apply such provisions. The 3 [State Government] may also revoke any such order, but not so that the revocation shall have any retrospective effect. All orders and revocations under this section shall be published in the official Gazette. 4 [***]

3 Commencement- Repealed by the Repealing Act, 1876.

4 Married women’s earnings to be their separate property The wages and earnings of any married woman acquired or gained by her after the passing of this Act, in any employment, occupation or trade carried on by her and not by her husband, and also any money or other property so acquired by her through the exercise of any literary, artistic or scientific skill, and all savings from and investments of such wages, earnings and property, shall be deemed to be her separate property, and her receipts alone shall be good discharges for such wages, earnings and property

6 Insurance by husband for benefit of wife :- 5

[(1) ] A policy of insurance effected by any married man on his own life, and expressed on the face of it to be for the benefit of his wife, or of his wife and children, or any of them, shall endure and be deemed to be a trust for the benefit of his wife, or of his wife and children, or any of them, according to the interest so expressed, and shall not, so long as any object of the trust remains, be subject to the control of the husband., or to his creditors, or form part of his estate. When the sum secured by the policy becomes payable, it shall, unless special trustees are duly appointed to receive and hold the same, be paid to the Official Trustee of the 6 [State] in which the office at which the insurance was effected is situate, and shall be received and held by him upon the trusts expressed in the policy, or such of them as are then existing. And in reference to such sum he shall stand in the same position in all respects as if he had been duly appointed trustee thereof by a High Court, under Act No. XVII of 1864 7 [to constitute an office of Official Trustee], section 10. Nothing herein contained shall operate to destroy or impede the right of any creditor to be paid out of the proceeds of any policy of assurance which may have been effected with intent to defraud creditors.

8 [(2) Notwithstanding anything contained in section 2, the provisions of sub-section (1) shall apply in the case of any policy of insurance such as is referred to therein which is effected-

(a) by any Hindu, Muhammadan, Sikh or Jain-

(ii) in any other territory to which this Act extended immediately before the commencement of the Married Women’s Property (Extension) Act 1959, after the first day of April, 1923, or

(iii) in any territory to which this Act extends on and from the commencement of the Married Women’s Property (Extension) Act, 1959, on or after such commencement;

(b) by a Buddhist in any territory to which this Act extends, on or after the commencement of the Married Women’s Property (Extension) Act, 1959:

7 Married women may take legal proceedings :- A married woman may maintain a suit in her own name for the recovery of property of any description which, by force of the said Indian Succession Act, 18658, (10 of 1865) or of this Act, is her separate property; and she shall have, in her own name, the same remedies, both civil and criminal, against all persons, for the protection and security of such property, as if she were unmarried, and she shall be liable to such suits, processes and orders in respect of such property as she would be liable to if she were unmarried.

8 Wife’s liability for postnuptial debts :- If a married woman (whether married before or after the first day of January, 1866) possesses separate property, and if any person enters into a contract with her with reference to such property, or on the faith that her obligation arising out of such contract will be satisfied out of her separate property, such person shall be entitled to sue her, and, to the extent of her separate property, to recover against her whatever he might have recovered in such suit had she been unmarried at the date of the contract and continued unmarried at the execution of the decree: 9 [ Provided that nothing herein contained shall-

(a) entitle such person to recover anything by attachment and sale or otherwise out of any property which has been transferred to a woman or for her benefit on condition that she shall have no power during her marriage to transfer or charge the same or her beneficial interest therein, as

(b) affect the liability of a husband for debts contracted by his wife’s agency expressed or implied. www.TheTaxTalk.com]

9 Husband not liable for wife’s antenuptial debts :- A husband married after the thirty-first day of December, 1865 shall not by reason only of such marriage be liable to the debts of his wife contracted before marriage, but the wife shall be liable to be sued for, and shall, to the extent of her separate property, be liable to satisfy such debts as if she had continued unmarried: Proviso .- Provided that nothing contained in this section shall 10 [***] invalidate any contract into which a husband may, before the passing of this Act, have entered in consideration of his wife’s antenuptial debts.

10 Extent of husband’s liability for wife’s breach of trust or devastation Where a woman is a trustee, executrix or, either before or after marriage, her husband shall not, unless he acts or intermeddles in the trust or administration, be liable for any breach of trust committed by her, or for any misapplication, loss or damage to the estate of the deceased caused or made by her, or for any loss to such estate arising from her neglect to get in any part of the property of the deceased.

For Tax & Corporate Law Updates on Mobile, we have created Telegram and Whatsapp Group with following Link:

Income Tax Act on Your Mobile Now
Android Application
for
Income Tax Act – 1961 with Cost Inflation Index
and other tools on Mobile now at following link:

ITAT mumbai quashesld the tax demand of Rs 5,872 Cr on a demerger transaction of Grasim