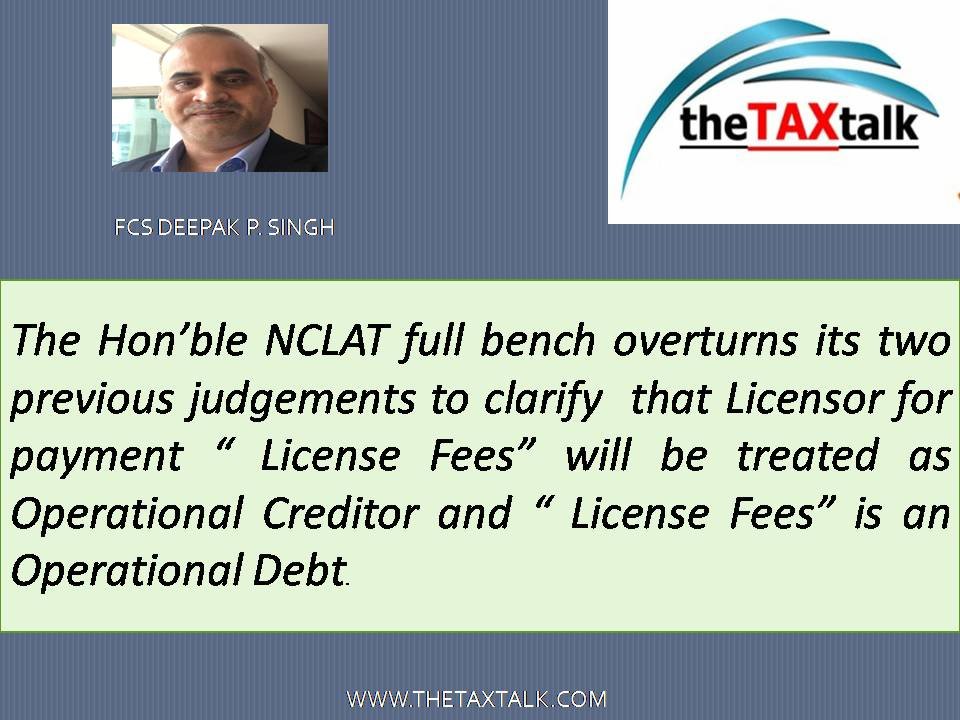 There are various judgements on this matter and there are two views in the judiciary for treatment of Licence Fees. Some Courts treated a Licensor for License Fees as Operational Creditors and some courts have not recognised. The NCLAT in through its judgement in above mentioned case settled the dispute and held that licensor for License Fees or Lessor for Lease Rent Payment will be considered and Operational Creditor.

ii). Whether claim of the Licensor for payment of License Fee for use and occupation of immovable premises for commercial purposes is a claim of Company Appeal (AT) (Insolvency) No. 423 of 2021 1 ‘Operational Debt’ within the meaning of Section 5(21) of the Code.”

OBSERVATIONS AND DECISION OF NCLAT

(21) “operational debt” means a claim in respect of the provision of goods or services including employment or a debt in respect of the payment of dues arising under any law for the time being in force and payable to the Central Government, any State Government or any local authority”

“(33) “transaction” includes an agreement or arrangement in writing for the transfer of assets, or funds, goods or services, from or to the corporate debtor”

(i) License was granted with regard to Admin Building, which has super area measuring 31000 Sq. Ft., which was referred to as Demised Premises in Annexure-A to the Agreement. The Recitals as quoted above also contains following: –

“Whereas the Demised Premise is a Warm Shell Building with fittings and fixtures, electrical, flooring , as per good corporate standards and as per the requirement of the LICENSEE”.

(ii) Licensee has agreed to take the Demised Premises for the purpose of running an educational establishment on the terms and conditions appearing in the Agreement.

“SERVICE” means service which is made available to potential users and includes the provisions of facilities in connection with banking, financing, insurance, chit fund, real estate, transport, processing, supply of electrical or other energy, board or lodging or both, entertainment, amusement or the conveying of news or other information but does not include the rendering of any service free of charge or under a contract of personal service.”

THE clause 4(b) of the agreement provides that

“4(b) In addition to the above, the LICENSEE shall pay all government taxes including but not limited to Service Tax, VAT GST, Excise etc., over and above the License fee, which are or may become applicable in the future, in relation to the payments under this agreement.”

The above condition stipulates that Licensee shall pay all government taxes including but not limited to Service Tax, VAT, GST, Excise etc., over and above License Fee. The Agreement itself thus support payment of GST. The payment of GST is contemplated only for ‘goods’ and ‘services’ and the Clause 4 of the Agreement clearly indicates that when Licensee is to be taxed for GST, it being taxed for ‘services’.

Definition of Service given by CGST Act, 2017 as follows.

“2(52) “goods” means every kind of movable property other than money and securities but includes actionable claim, growing crops, grass and things attached to or forming part of the land which are agreed to be severed before supply or under a contract of supply”.

“13. It is clear that words and expressions used in IBC which have not been defined but which have been defined in the Acts mentioned above can be directly imported. However, the Consumer Protection Act, 2019 Company Appeal (AT) (Insolvency) No. 423 of 2021 36 and Central Goods and Services Tax Act, 2017 do not appear to have been covered under the Section 3 (37) and thus definition of “Service” and “Activities” to be treated as supply of service cannot simply be lifted and applied in IBC. Learned Counsel for parties in Anup Shushil Dubey Vs. National Agriculture Co-operative Marketing Federation of India Limited & Ors do not appear to have brought this to Notice of Bench. For such reasons, with all due respect, we find that we are unable to have a second look at the opinion we arrived at in the Judgment in the matter of “Mr. M. Ravindranath Reddy Versus Mr. G. Kishan & Ors.”

(1) Judgment of this Tribunal in Mr. M. Ravindranath Reddy (supra) as well as judgment in Promila Taneja’s case does not lay down the correct law.

(2) The claim of Licensor for payment of license fee for use of Demised Premises for business purposes is an ‘operational debt’ within the meaning of Section 5(21) of the Code.

CONCLUSION: this is a welcome decision of the NCLAT, in this case the Appellate Tribunal find out that  in Judgment of this Tribunal in Mr. M. Ravindranath Reddy (supra) as well as judgment in Promila Taneja’s case does not lay down the correct law and a licensor for Outstanding License Fees is an Operational Creditor. The NCLAT has also elaborated the definition of “Service” as same is not defined in IBC,2016. Since agreement of applicant with the respondent provides that License Fees will be payable along with GST and other applicable Government taxes. Since GST is payable on supply of goods or services and hence License or Lease  is treated as supply of service and consideration will be paid in the form of License or Lease rental  and hence the Licensor or the Lessor is “Operational Creditor” eligible to start CIRP or file application under Section 9 of IBC,2016.

DISCLAIMER:the case law presented here is only for sharing  information and knowledge with the readers. The views are personal and shall not be considered as professional advice. in case of necessity do consult with professionals for more understanding and clarity on subject matter.