TDS: Whether liability to do TDS u/s 194C on payment to travel agent for booking of airline tickets 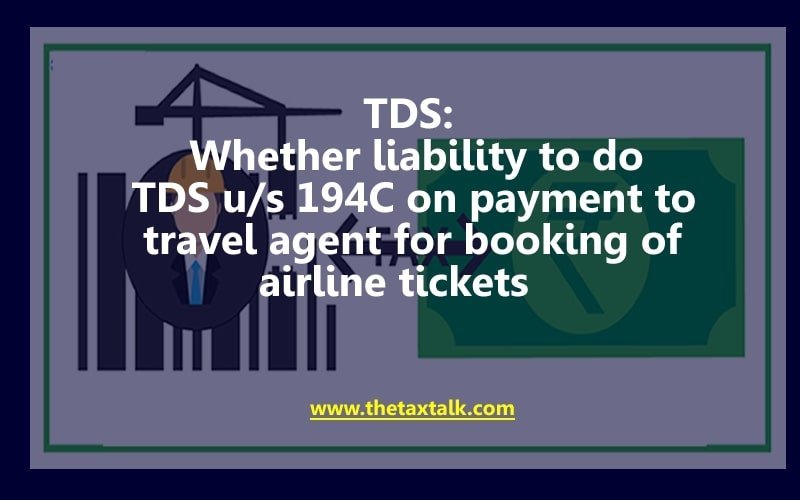 TDS: Whether liability to do TDS u/s 194C on payment to travel agent for booking of airline tickets

This is one of the most common questions as various businessmen are regularly making payments to travel agents for booking the airline tickets.

Section 194C of the Act requires TDS on payment of “works contract”. Section 194C reads as under:

(1) Any person responsible for paying any sum to any resident (hereafter in this section referred to as the contractor) for carrying out any work (including supply of labour for carrying out any work) in pursuance of a contract between the contractor and a specified person shall, at the time of credit of such sum to the account of the contractor or at the time of payment thereof in cash or by issue of a cheque or draft or by any other mode, whichever is earlier, deduct an amount equal to—

(i) one per cent. where the payment is being made or credit is being given to an individual or a Hindu undivided family;

(ii) two per cent. where the payment is being made or credit is being given to a person other than an individual or a Hindu undivided family,

of such sum as income-tax on income comprised therein.

(2) Where any sum referred to in sub-section (1) is credited to any account, whether called “Suspense account” or by any other name, in the books of account of the person liable to pay such income, such crediting shall be deemed to be credit of such income to the account of the payee and the provisions of this section shall apply accordingly.

(3) Where any sum is paid or credited for carrying out any work mentioned in sub-clause (e) of clause (iv) of the Explanation, tax shall be deducted at source—

(i) on the invoice value excluding the value of material, if such value is mentioned separately in the invoice; or

(ii) on the whole of the invoice value, if the value of material is not mentioned separately in the invoice.

(5) No deduction shall be made from the amount of any sum credited or paid or likely to be credited or paid to the account of, or to, the contractor, if such sum does not exceed thirty thousand rupees:

Provided that where the aggregate of the amounts of such sums credited or paid or likely to be credited or paid during the financial year exceeds 4921[ one lakh rupees], the person responsible for paying such sums referred to in sub-section (1) shall be liable to deduct income-tax under this section.

(6) No deduction shall be made from any sum credited or paid or likely to be credited or paid during the previous year to the account of a contractor during the course of business of plying, hiring or leasing goods carriages,4922[where such contractor owns ten or less goods carriages at any time during the previous year and furnishes a declaration to that effect along with] his Permanent Account Number, to the person paying or crediting such sum.

(7) The person responsible for paying or crediting any sum to the person referred to in sub-section (6) shall furnish, to the prescribed income-tax authority or the person authorised by it, such particulars, in such form and within such time as may be prescribed.

(i) “specified person” shall mean,—

(a) the Central Government or any State Government; or

(b) any local authority; or

(c) any corporation established by or under a Central, State or Provincial Act; or

(e) any co-operative society; or

(f) any authority, constituted in India by or under any law, engaged either for the purpose of dealing with and satisfying the need for housing accommodation or for the purpose of planning, development or improvement of cities, towns and villages, or for both; or

(g) any society registered under the Societies Registration Act, 1860 (21 of 1860) or under any law corresponding to that Act in force in any part of India; or

(i) any university established or incorporated by or under a Central, State or Provincial Act and an institution declared to be a university under section 3 of the University Grants Commission Act, 1956 (3 of 1956); or

(j) any Government of a foreign State or a foreign enterprise or any association or body established outside India; or

(l) any person, being an individual or a Hindu undivided family or an association of persons or a body of individuals, if such person,—

(A) does not fall under any of the preceding sub-clauses; and

(ii) “goods carriage” shall have the meaning assigned to it in the Explanation to sub-section (7) of section 44AE;

(iii) “contract” shall include sub-contract;

(c) carriage of goods or passengers by any mode of transport other than by railways;

but does not include manufacturing or supplying a product according to the requirement or specification of a customer by using material purchased from a person, other than such customer or associate of such customer.

As far as payment to travel agents against booking is concerned, it may be noted that CBDT has clarified it vide its Circular No. 715 Dated 08/08/1995 wherein 34 questions have been dealt. Question number 6 which relates to payment made to travel agent/airline for booking of tickets wherein it has been clarified in the circular that, notwithstanding the payment has been made by the payee list mentioned as above, the contract of purchasing the ticket is between individual passenger and the airline/travel agent ,so tax should not be deducted.

The payments made to a travel agent or an airline for purchase of a ticket for travel would not be subjected to tax deduction at source as the privity of the contract is between the individual passenger and the airline/travel agent, notwithstanding the fact that the payment is made by an entity mentioned in section 194C(1). The provision of section 194C shall, however, apply when a plane or a bus or any other mode of transport is chartered by one of the entities mentioned in section 194C of the Act. As regards payments made to clearing and forwarding agents for carriage of goods, the same shall be subjected to tax deduction at source under section 194C of the Act.

As a result of above clarification, no tax should be deducted u/s 194C on payment made to travel agent/airline for booking of tickets.