Switches, routers, printer, server etc cannot be used without computer & so they form part of peripherals of the computer and entitled to depreciation at the same rate 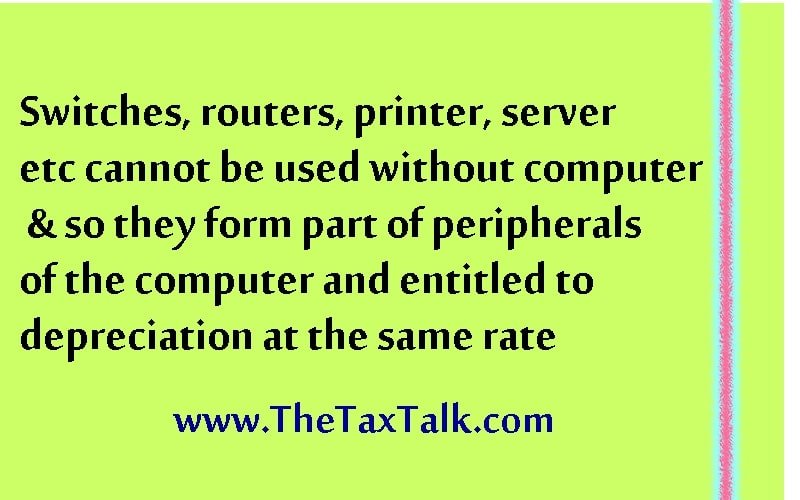 Switches, routers, printer, server etc cannot be used without computer & so they form part of peripherals of the computer and entitled to depreciation at the same rate

Claim of depreciation on switches and routers
HC held that the judgment delivered by the Delhi High Court in the case of CIT vs. BSES YAMUNA POWERS LTD[2010 (8) TMI 58 – DELHI HIGH COURT] has concluded the controversy as held that the computer accessories and peripherals such as printers, scanners and server etc., form an integral part of the computer system.
Thus it can be safely held that the switches and routers as they cannot be used without computer, they form part of peripherals of the computer and entitled to depreciation at 60%.
The revenue has not been able to controvert the said finding of the Tribunal and therefore, in light of the judgment delivered by the Delhi High Court, the first substantial question of law is answered in favour of the assessee and against the revenue.

Disallowance of foreign exchange loss on forward contracts – allowable revenue expenditure u/s 37
HC held that the issue stands covered by the judgment delivered by the Bombay High Court in the case of CIT vs. D.CHETAN & CO. [2016 (10) TMI 629 – BOMBAY HIGH COURT].
As carefully gone through the entire record and the case of the assessee is that the loss is on account of the restatement of debtors and creditors, book liability etc., which was incurred on account of the forward contracts which includes both realized and unrealized losses.
The details of gain and loss on account of the fluctuations of foreign exchange were filed before the assessing officer.
However, the assessing officer merely relying upon Instruction No.3/2010 issued by the Central Board of Direct Taxes concluded that it is a notional loss and has to be treated as a speculative loss in terms of Section 43(5) of the Act.
Assessing officer did not dispute the fact that the loss incurred by the respondent – assessee is in the ordinary course of its business and therefore, would fall within the exceptions provided in the proviso to Section 43(5) of the Act.
Therefore, the judgment delivered in the case of D.Chethan and Co., (supra) squarely covers the present case.
As held that the assessing officer has not given a finding that the transaction entered into by the assesseee was a speculative in nature and the revenue at no point challenged the assertion of the assessee that the activity of entering into the forward contract was in the regular course of its business.
Therefore, in the present case when the assessing officer has neither disputed the fact that the loss was in the regular course of business nor rendered any finding that the transaction was speculative in nature except making a bald statement, the Tribunal was justified in relying upon case of D.Chetan and Co., (supra).
In WOODWARD GOVERNOR INDIA P. LTD. & M/S HONDA SIEL POWER PRODUCTS LTD. [2009 (4) TMI 4 – SUPREME COURT] held the loss on account of foreign exchange fluctuation is allowable as a deduction under Section 37(1)
Decided in favour of assessee.

Tags: Rate of of depreciation on switches and routers