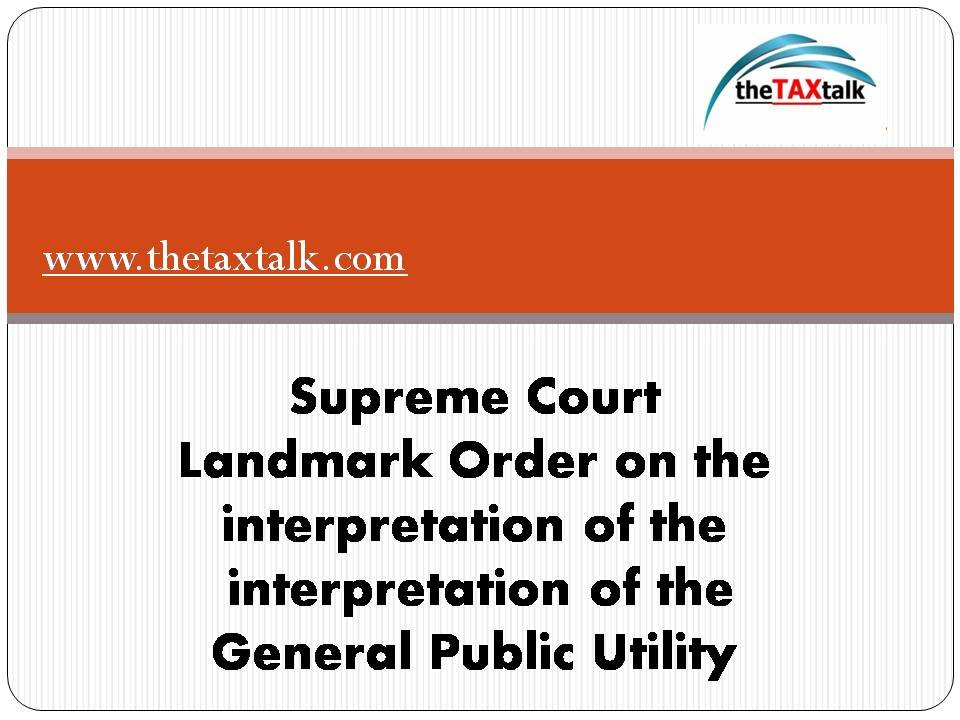 The scope and amplitude of the definition “charitable purpose” under the Income Tax Act, 1961 has engaged the courts attention on innumerable occasions.

The expression “not involving the carrying on of any activity for profit” in the last limb of the definition [Section 2(15) prior to amendment by Finance Act, 1983 was also the subject of debate in various cases.

One may note that an assessee advancing general public utility cannot engage itself in any trade, commerce or business, or provide service in relation thereto for any consideration, be it called as cess, or fee, or any other consideration.

However, in the course of achieving the object of general public utility, the concerned trust, society, or other such organization, can carry on trade, commerce or business or provide services in relation thereto for consideration, provided that

(i)   the activities of trade, commerce or business are actual carrying out to the achievement of its objects of GPU and

(ii)   the receipt from such business or commercial activity or service in relation thereto, does not exceed 20% of total receipts of the previous year.

Here is the final verdict by the Supreme Court in the case of Assistant Commissioner of Income-tax (Exemptions) Vs Ahmedabad Urban Development Authority.  The issue was as to the meaning of the Object of General Public Utility (GPU)) in Section 2(15) of the Income-tax Act,1961 and when that object of GENERAL PUBLIC UTILITIY (GPU) gets converted into trade, commerce or business so as to attract the limits laid down in the said Section for being covered as a charitable purpose.

In this case, the three judges bench of the Supreme Court  was dealing with more than 100 SLPs. The SLP filed includes not only those filed by the Housing Boards but also by various Trade associations, Sports Association, Institute of Chartered Accountants of India and stock exchanges etc. All were with regard to the interpretation of the proviso to Section 2(15) of the Income-tax Act,1961 and answer to the question as to whether they were involved in object of GENERAL PUBLIC UTILITY (GPU) and it so, whether they were carrying on any trade, commerce and business.

The court while noting the entire history of charitable enactments since early 1900 carried out the thread bare analysis of the decisions in case the Indian Chamber of Commerce, Andhra Chamber of Commerce, Surat Art Silk Mills wherein the predominant object test was applied.

It also noted the observation in the case of Thanti Trust and the law in this regard including the provisions of Section 11(4) and 11(4A) and the distinction between these two sections.

The court also interpreted the relevance of circulars; FM speech in the parliament as far as interpretation of an enactment was concerned.

With all above background material, the court held that Section 2(15) after its amendment in 2008 and as it stands today observed as under:

On these basis, Statutory Corporations, Boards, authorities, trusts, statutory regulatory bodies like ICAI were held be engaged in object of general public utility

“ Trade promotion bodies Bodies involved in trade promotion (such as AEPC), or set up with the objects of purely advocating for, coordinating and assisting trading organizations, can be said to be involved in advancement of objects of general public utility. However, if such organizations provide additional services such as courses meant to skill personnel, providing private rental spaces in fairs or trade shows, consulting services, etc. then income or receipts from such activities, would be business or commercial in nature. In that event, the claim for tax exemption would have to be again subjected to the rigors of the proviso to Section 2(15) of the IT Act”.

The court in the concluding part has given its disclaimer with following observation:

“At the cost of repetition, it may be noted that the conclusions arrived at by way of this judgment, neither precludes any of the assessees (whether statutory, or non-statutory) advancing objects of general public utility, from claiming exemption, nor the taxing authorities from denying exemption, in the future, if the receipts of the relevant year exceed the quantitative limit. The assessing authorities must, on a yearly basis, scrutinize the record to discern whether the nature of the assessee’s activities amount to “trade, commerce or business” based on its receipts and income (i.e., whether the amounts charged are on cost-basis, or significantly higher). If it is found that they are in the nature of “trade, commerce or business”, then it must be examined whether the quantified limit (as amended from time to time) in proviso to Section 2(15), has been breached, thus disentitling them to exemption.”

This judgement will have far reaching repercussions for all the charitable trust.