Since penalty proceedings are distinct from assessment proceedings, additional evidences filed by assessee can be rejected? 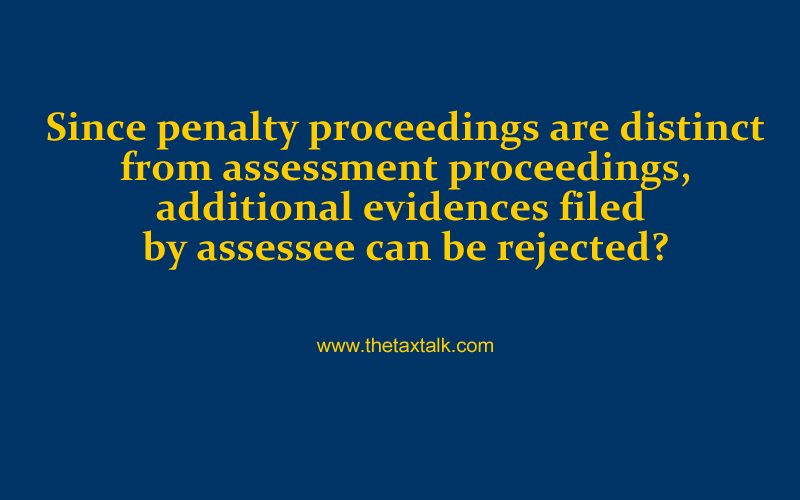 THE Issue is – Whether since penalty proceedings are distinct from assessment proceedings, additional evidences filed by the assessee, cannot be rejected for admission simply following the order of the ITAT in quantum proceedings – YES IS THE VERDICT.

The assessee had filed return for relevant AY. During assessment, the AO made addition of unsecured loans taken by the assessee from 24 persons since no documents proving the genuineness of the loans was filed by the assessee. The AO also levied penalty u/s 271(1)(c) on account of the addition so made. The matter was carried in appeal before the CIT(A) who partly allowed the assessee’s appeal.

The CIT(A) thereafter proceeded to adjudicate the appeal before him and held that the penalty had been rightly imposed by the AO since the assessee had failed to establish the genuineness of the loans. Aggrieved assessee filed appeal before Tribunal and submitted that CIT(A) refused to admit additional evidences furnished to prove genuineness of the loans transactions.

The standard of proof/consideration for making an addition or disallowance in quantum proceedings, ranging from insufficiency of evidences to absence of any evidences filed, are different from the standard of proof /consideration which may lead to the levy of penalty, which requires conclusive findings to the effect that wrong particulars of income had been furnished or particulars of income had been concealed.

Thus while additions/disallowances may be made on account of insufficiency of evidences to prove the claim of the assessee, the factor may not be sufficient for holding that the assessee had concealed or furnished inaccurate particulars of income so as to levy penalty. The findings in quantum proceedings cannot therefore be blindly followed for in penalty proceedings;

++ the evidences do show that the transactions took place through banking channels, that the loans were repaid also in later years, that interest was also paid on the same and TDS was deducted by the Government also. Further the assessee had also filed confirmations from four parties which had not been filed to the I.T.A.T. in quantum proceedings.

The documents therefore throw some light on the fact that loans had been taken by the assessee, though they may not be sufficient enough to conclusively prove the genuineness of the transactions. In the light of these documents, the unsecured loans shown to be taken by the assessee cannot be categorically held to be a bogus transaction, though it may be sufficient for making addition u/s 68 of the Act.

The documents therefore are relevant for the purpose of determining whether the assessee had concealed /furnished any inaccurate particulars of income, for the levy of penalty. The rejection of the same for admission by the Ld.CIT(Appeals) is therefore set aside;

++ no penalty was leviable in the present case. As the documents filed by the assessee though may not have conclusively proved the genuineness of the transactions, the said documents do show that the money was received and repaid by the assessee through banking channels and even interest was paid on the same and TDS deducted.

The unsecured loans taken, cannot therefore be categorically held to be a sham transaction and the money so introduced therefore cannot be held to be the own money of the assessee so as to charge it with having concealed particulars /furnished inaccurate particulars of income by showing the same as loans taken instead of its own income.

There is, therefore, no case for levy of penalty u/s 271(1)© of the Act and the penalty levied therefore amounting to Rs.7,72,271/- is directed to be deleted.In the result, the appeal of the assessee is partly allowed.