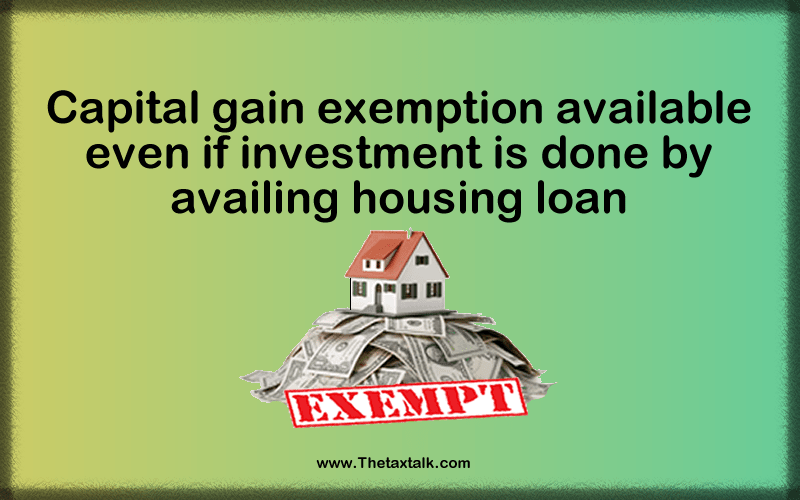 Assumptions & presumptions are the biggest barrier to tax planning. One such presumption is with regard to availability of exemption under section 54 against Long Term Capital Gain (LTCG).

Exemption u/s 54 is available if any person earns Long Term Capital Gain (LTCG) from sale of a house property. To avail exemption, taxpayers have to invest the amount of LTCG towards purchase/construction of another house property within prescribed time frame. The prescribed time periods are as under:

Most of the taxpayers carry the presumption that:

Section 54 merely stipulates the purchase or construction of another house property for claiming an exemption u/s 54. It nowhere stipulates the investment of the same fund or investment of own fund for claiming an exemption. It was held in the case of Mrs. Prema (P) Shah Vs. ITO (2006) 11 (II) ITCL 303 (Mum J-Trib) wherein Tribunal rejected the contention of the income tax department denying exemption on the ground that the borrowed fund or foreign earning is invested by Mrs. Prema Shah in another house property.

Similar conclusions was drawn in the case of Bombay Housing Corpn Vs. Asstt. CIT (2002) 81 ITD 545 (Mum Trib) wherein Tribunal held that, even if an assessee borrows required fund and satisfied the condition relating to investment in specified assets, he is entitled to exemption. There is no requirement that the same amount should be utilized for purchasing the property and even borrowed fund can be utilized for that purpose.

Recently, the Kolkata bench of the Income-tax Appellate Tribunal (ITAT) in the case of Amit Parekh Vs. I.T.O., Ward 30 (2), Kolkatahas also held that merely because taxpayer had availed housing loan from bank for purchasing a new residential unit, that cannot act as a disqualification for claim of exemption u/s. 54 when the primary conditions imposed in Sec. 54 of the Act were satisfied. No direct nexus between the LTCG & investment thereof is required for claiming an exemption.

Section 54 provides an investment linked exemption. It may be noted that exemption is permitted even if taxpayer purchases another house even one year prior to sale of the old residential house which obviously means that the same fund from sale of old house could not have been used.

No direct nexus or identity of the same fund is required for claiming LTCG exemption. Taxpayer can claim LTCG exemption even if investment is done by availing housing loan. Housing loan & Capital Gains Exemption are two separate issues.