Section 94A & Reporting requirements in the ITR Forms 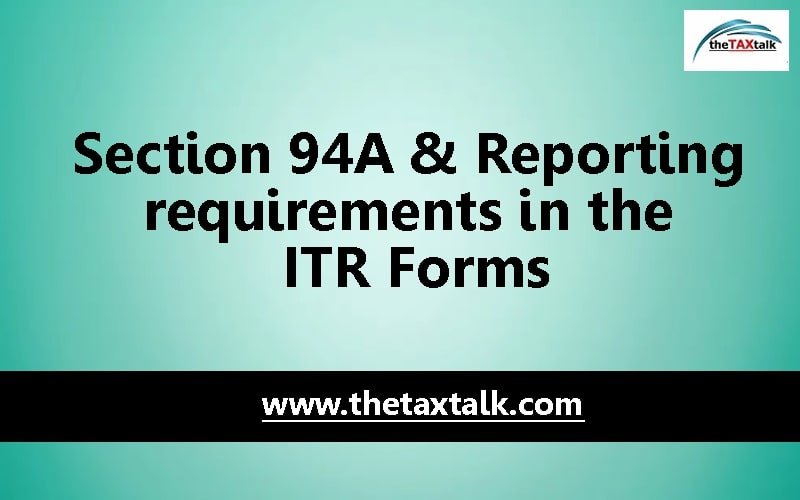 Section 94A & Reporting requirements in the ITR Forms

Income tax return Forms requires disclosure as to whether any transaction has been made with a person located in a jurisdiction notified u/s 94A of the Act?

Let us know about section 94A. The same is reproduced hereunder:

Special measures in respect of transactions with persons located in notified jurisdictional area.

94A. (1) The Central Government may, having regard to the lack of effective exchange of information with any country or territory outside India, specify by notification in the Official Gazette such country34a or territory as a notified jurisdictional area in relation to transactions entered into by any assessee.

(2) Notwithstanding anything to the contrary contained in this Act, if an assessee enters into a transaction where one of the parties to the transaction is a person located in a notified jurisdictional area, then—

(i) all the parties to the transaction shall be deemed to be associated enterprises within the meaning of section 92A;

(ii) any transaction in the nature of purchase, sale or lease of tangible or intangible property or provision of service or lending or borrowing money or any other transaction having a bearing on the profits, income, losses or assets of the assessee including a mutual agreement or arrangement for allocation or apportionment of, or any contribution to, any cost or expense incurred or to be incurred in connection with a benefit, service or facility provided or to be provided by or to the assessee shall be deemed to be an international transaction within the meaning of section 92B,

(3) Notwithstanding anything to the contrary contained in this Act, no deduction,—

(a) in respect of any payment made to any financial institution located in a notified jurisdictional area shall be allowed under this Act, unless the assessee furnishes an authorisation in the prescribed form authorising the Board or any other income-tax authority acting on its behalf to seek relevant information from the said financial institution on behalf of such assessee; and

(b) in respect of any other expenditure or allowance (including depreciation) arising from the transaction with a person located in a notified jurisdictional area shall be allowed under any other provision of this Act, unless the assessee maintains such other documents and furnishes such information as may be prescribed34b, in this behalf.

(4) Notwithstanding anything to the contrary contained in this Act, where, in any previous year, the assessee has received or credited any sum from any person located in a notified jurisdictional area and the assessee does not offer any explanation about the source of the said sum in the hands of such person or in the hands of the beneficial owner (if such person is not the beneficial owner of the said sum) or the explanation offered by the assessee, in the opinion of the Assessing Officer, is not satisfactory, then, such sum shall be deemed to be the income of the assessee for that previous year.

(5) Notwithstanding anything contained in any other provisions of this Act, where any person located in a notified jurisdictional area is entitled to receive any sum or income or amount on which tax is deductible under Chapter XVII-B, the tax shall be deducted at the highest of the following rates, namely:—

(a) at the rate or rates in force;

(b) at the rate specified in the relevant provisions of this Act;

(c) at the rate of thirty per cent.

(i) “person located in a notified jurisdictional area” shall include,—

(a) a person who is resident of the notified jurisdictional area;

(b) a person, not being an individual, which is established in the notified jurisdictional area; or

(c) a permanent establishment of a person not falling in sub-clause (a) or sub-clause (b), in the notified jurisdictional area;

(ii) “permanent establishment” shall have the same meaning as defined in clause (iiia) of section 92F;

(iii) “transaction” shall have the same meaning as defined in clause (v) of section 92F.]