Section 234E cannot be said to be unreasonable and arbitrary: Kerala HC 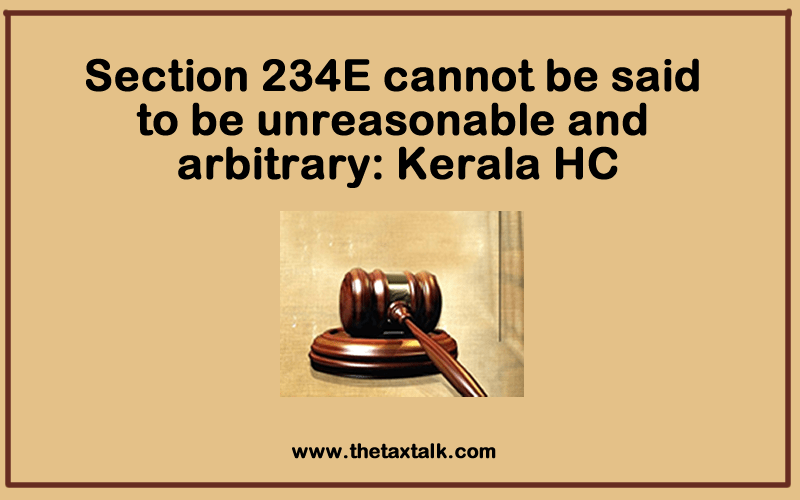 Section 234E cannot be said to be unreasonable and arbitrary: Kerala HC

Section 234E cannot be said to be unreasonable and arbitrary inasmuch as it is on account of additional work burden which has fallen upon department due to fault of deductor to file TDS statement within time, that a fee has been levied
[2017] 77 taxmann.com 244 (Kerala)
Sree Narayana Guru Smaraka Sangam Upper Primary School  v. Union of India* A.M. SHAFFIQUE, J. W.P. (C) NO. 30229 OF 2013 AND OTHERS DECEMBER  14, 2016
In order to levy a fee, there has to be an element quid pro quo. What exactly is the quid pro quo for levying a fee arises for consideration. In the Explanatory Note and in the counter affidavit filed, the Central Government had taken a view that delay in filing statement of TDS is causing substantial inconvenience to deductees as the department is not in a position to finalise the tax returns in time and to refund the amount payable to such deductees. A similar question was considered by the Bombay High Court in Rashmikant Kundalia v. Union of India [2015] 373 ITR 268/229 Taxman 596/54 taxmann.com 200 and it was held that the late filing of TDS return/statements is regularised upon payment of the fee as set out in section 234E which is nothing but a privilege and a special service to the deductor allowing him to file the TDS return/statement beyond the time prescribed by the Act or the Rules. Hence, it was held that there is an element of quid pro quo for collecting the fee. [Para 22]
The main contention of the petitioner is based on the memorandum explaining amendment moved in the Finance Bill,2012, wherein it is indicated that the provision had been incorporated as a deterrence to the deductors who delay in furnishing TDS statement in time. While considering the validity of a statute, the exact words of the Explanatory Note cannot have any relevance. It has to be verified whether the fee that is being charged is in the form of a penalty so that an opportunity should be given to the deductor to explain the reasons for delay before imposing such fee/penalty. [Para 23]
As already held by the Bombay High Court in Rashmikant Kundalia (supra), ‘undoubtedly, delay in furnishing of TDS return/statements has a cascading effect. Under the Income-tax Act, there is an obligation on the Income-tax department to process the income tax returns within the specified period from the date of filing. The department cannot accurately process the return on whose behalf tax has been deducted (the deductee) until information of such deductions is furnished by the deductor within the prescribed time.’ It is on account of the additional work burden which has fallen upon the department due to the fault of the deductor that a fee has been levied. [Para 24]
The provision is not onerous even in the absence of a right of appeal as it is always open for the aggrieved person to approach the High Court under article 226 of the Constitution of India. [Para 25]
Section 200A was amended by the Finance Act, 2015 incorporating clause (c) and an order passed under section 200A is made appealable under section 246A. This benefit of appeal is available only after the commencement of the Finance Act, 2015. Since the appellate remedy has already been provided, the petitioner cannot contend that the impugned provision of the Act is unreasonable and arbitrary.