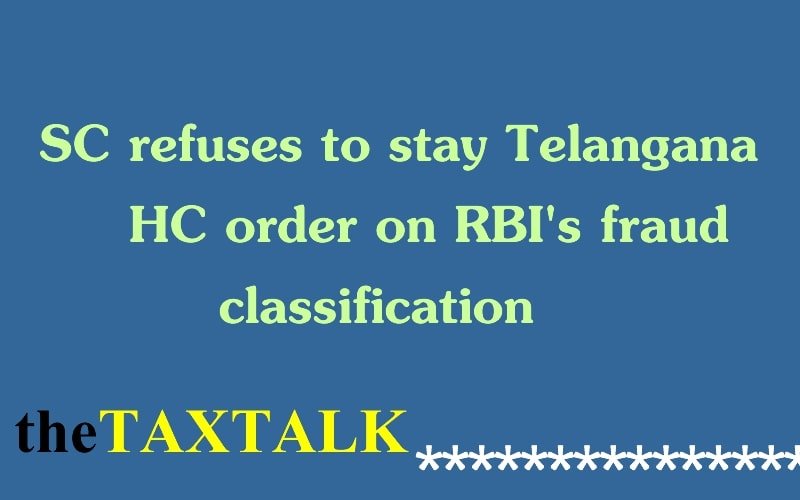 The Supreme Court has refused to stay an order by the Division Bench of the Telangana High Court, which called the Reserve Bank of India’s (RBI) circular on fraud classification arbitrary and illegal.

The Supreme Court has, however, allowed the parties to file replies and rejoinders and listed the matter on July 13. The SC was hearing an appeal filed against a small company that had defaulted on bank loans and its account was classified as fraud as per the RBI circulars.

But as the Telangana court stated that the classification would impact other corporate accounts too, SBI and RBI moved the apex court.

The Supreme Court also directed that the minutes/order of the Joint Lenders Meeting dated February 2019 is not to be acted upon till further orders on this particular account.

This order would be a major relief to other parties who are similarly placed and affected by “fraud classification” by the lenders without applying the principles of natural justice, say legal sources. “The other side should be given an opportunity to explain what is the transaction was all about and then it can be declared a fraud,” said a legal source

As per the RBI circular on fraud classification, lenders are to file the complaint with the Central Bureau of Investigation (CBI) in the stipulated time. But this has to wait till SC gives its final judgement. The Telangana High Court had said the RBI circular did not follow the principals of natural justice and did not give an opportunity of personal hearing to the other side.

The apex court, in an earlier order, had asked banks to follow the principles of natural justice while seeking to classify an account as a “wilful defaulter”.

Lenders generally regard an account as ‘wilful defaulter’ or ‘fraud’ based on a report of a forensic auditor appointed by the banks.

However, there are currently no prescribed forensic standards that mandate or explain how an auditor is required to approach any particular set of transactions before it. In the case of DHFL, an auditing firm gave a clean chit to the company but later Grant Thornton detected frauds worth 15,000 crore in the books.

The Institute of Chartered Accountants of India is seeking to introduce a set of forensic accounting standards which would need to be applied to evaluate and investigate during forensic audits. The Supreme Court will also clarify on the fate of accounts which are already declared frauds by banks.