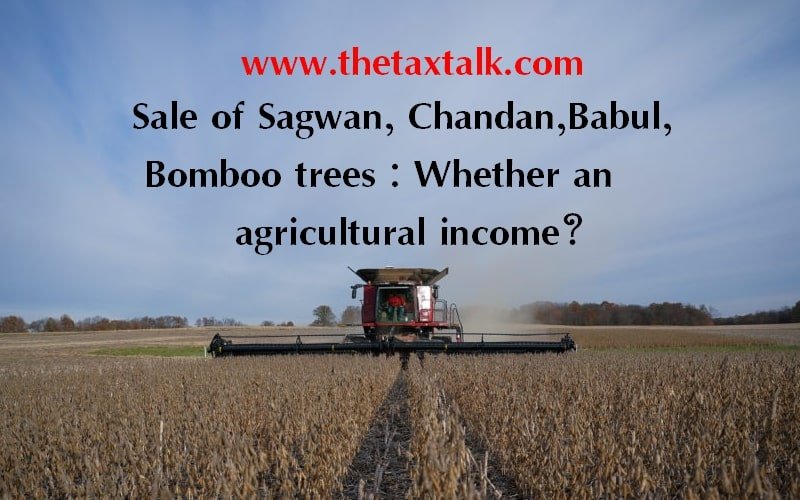 The question is very relevant from two perspectives.

First when the person carries out the plantation activity (like that of babul, sagwan, chandan, or bamboo trees

Second when the trees are grown tree by natural act without human involvement as such directly.

Let us know about the income tax implications

1.  One need to further refer section 2(1A) which defines the term “agriculture”.

3. Agriculture in its root sense means “ager” i.e., a field, and “culture”, i.e., cultivation, that is to say, cultivation of a field which implies expenditure of human skill and labour upon land.

4. In CIT vs. Raja Benoy Kumar Sahas Roy (1957) 32 ITR 466 (SC), the Supreme Court has held that the term “agriculture” cannot be confined merely to production of grain and food products for human beings and beasts but must be understood as comprising all products of the land which have some utility either for consumption or for trade and commerce and would also, include forest products such as timber, sal and piyasal trees, casuarina plantations, tendu leaves, horra nuts, etc.

5. Any items which grow wildly on the land or are of spontaneous growth not involving any labour or skill upon the land are not products of agriculture and income derived therefrom is not agricultural income.

6. In short, if the land has been cultivated and plantation of several trees has been done, the income derived would be treated as agricultural income.

7. If the assessee has cut the naturally grown trees leaving the roots intact, so that they may regenerate and has sold the same, the receipt would be a revenue receipt and not capital receipt and as such receipt did not represent agricultural income and as explained above, it would not be exempt.

8. On the other hand if the naturally grown trees are sold without leaving roots, the receipt would be a capital receipt and question of capital gains would arise.

11. In Raja Benoy Kumar’s case, it has been held that mere performance of subsequent operations, which are necessary after the produce sprouts, e.g., weeding, digging the soil around the growth, removal of undesirable under growths and all operations which fester the growth and preserve the same not only from insects and pests but also from depredation from outside, etc., on the products of the land, where such products have not been raised on the land by the performance of basic operations (viz., tilling the land, sowing of seeds, planting and similar operations on the land) would not be enough to characterise them as agricultural operations and that in order to invest them with the character of agricultural operations, these subsequent operations must necessarily be in conjunction with and a continuation of the basic operations which are effective cause of the products being raised from the land.

12. To conclude, subsequent operations on trees of wild growth after they are cut above the roots would not be agricultural operations in the above sense in view of the fact that basic operations explained above are non-existent