Robbery amount recovered by Police – Whether can be return to the Taxpayers even if the Income-tax Dept. has initiated section 132 proceedings? 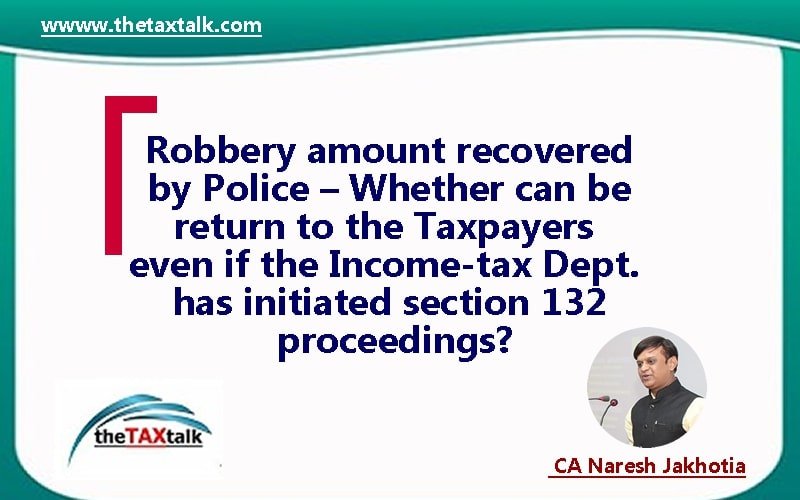 Robbery amount recovered by Police – Whether can be return to the Taxpayers even if the Income-tax Dept. has initiated section 132 proceedings?

Let us discuss more about it:

The relevant provision is Section 132 of the Income-tax Act, 1961 wherever the income tax department is involved. Section 132 deals with the Search and seizure and also one may draw the views regarding return of seized cash.

Here is an interesting case on the issue of custody of such cash as under: .

– A robbery was committed upon employees of assessee and a cash being sale proceeds from jewellery articles, was robbed

– Subsequently, robbed amount was recovered by Police and deposited in custody of concerned Court of Judicial Magistrate

– Assessee filed a petition for return of recovered cash before Judicial Magistrate, which was allowed subject to condition that assessee shall execute a bond

– Thereafter, revenue issued summons to assessee under section 131(1A) and assessee in his statement admitted that recovered cash belonged to him and it was his unaccounted income which had not been reported to tax

Where stolen cash was recovered and deposited in custody of Judicial Magistrate and assessee admitted that same was part of his unaccounted income then such cash could not be claimed by assessee until proceedings against it under section 132 were not concluded and amount due as tax was recovered by department. In short, its only after the completion of the assessment proceeding that the cash could be handed over.