Merely filing of an SLP would not make the order of the Court bad in law or give a license to the Revenue to proceed on the basis that the order is stayed and/or in abeyance: Bombay HC 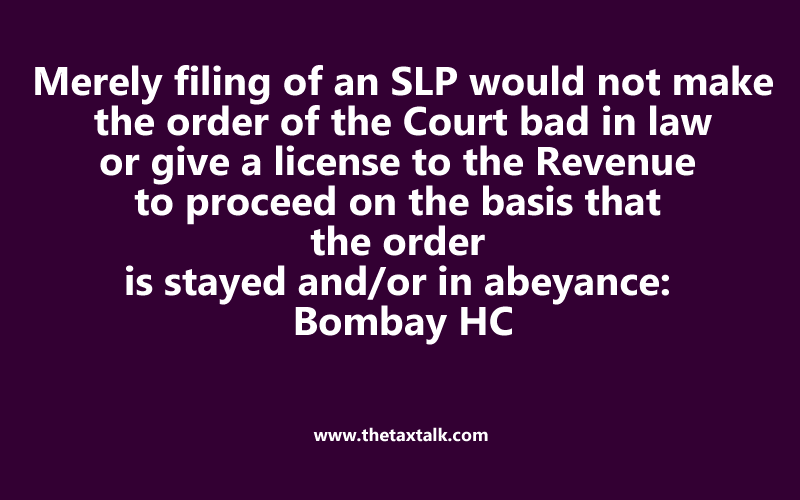 Merely filing of an SLP would not make the order of the Court bad in law or give a license to the Revenue to proceed on the basis that the order is stayed and/or in abeyance: Bombay HC

S. 32(2): There is no conflict between CIT vs. Hindustan Unilever Ltd 394 ITR 73 (Bom) & Miltons/ Confidence Petroleum because while the former is at the stage of final hearing, the latter is at the stage of admission. Accordingly, the request for reference to a Larger Bench is not acceptable. Merely filing of an SLP would not make the order of this Court bad in law or give a license to the Revenue to proceed on the basis that the order is stayed and/or in abeyance

IN THE HIGH COURT OF JUDICATURE AT BOMBAY

2. Mr. Pinto, Learned Counsel appearing for the Revenue’s urges the following question of law for our consideration :

“(i) Whether on the facts and circumstances of the case and in law, the Tribunal was justified in directing the Assessing Officer to allow carry forward and set-off of unabsorbed depreciation of Assessment Year 1999-2000 and Assessment Year 2000-2001 against the profits of Assessment Year 2009- 2010 without appreciating that as per the provisions of Section 32(2) as they stood prior to the amendment by Finance Act, 2001 w.e..f. 01.04.2002, such unabsorbed depreciation was eligible for carry forward and set-off against business profits only for a further period of eight years?”

3. By order dated 2nd August, 2018, this Appeal alongwith other Appeals raising this very issue have been kept today for final disposal. This, as some of the Appeals are already admitted on this very issue.

4. In support of the appeal, Mr. Pinto, Learned Counsel appearing for the Revenue seeks to rely upon the orders of this Court in the case of Commissioner of Income-Tax V/s. M/s. Milton Private Limited (Income Tax Appeal No. 2301 of 2013) and Commissioner of Income-Tax-8 Vs. M/s. Confidence Petroleum India Ltd. (Income Tax Appeal No. 582 of 2014), both of which were admitted on similar questions of law on 24th February, 2017 and 3rd April, 2017 respectively.

5. However, this Appeal alongwith other Appeals including the Appeal in Milton Private Ltd. (supra) and Confidence Petroleum (I) Ltd. (supra), are kept today for final disposal. Therefore, the order at the stage of admission will not govern the decision to be taken at the final disposal. We pointed out to Mr. Pinto that, the issue raised herein stood concluded so far as this Court is concerned by its decision in Commissioner of Income-Tax-1, Mumbai V/s. M/s. Hindustan Unilever Ltd. 394 ITR 73. The above decision placed reliance upon the decisions of the Gujarat High Court in Deputy Commissioner of Income Tax Vs. General Motors India P. Limited, 354 ITR 244 and the Central Board of Direct Taxes Circular dated 22nd November, 2001. Infact, the above order of this Court records the fact that the Revenue was not able to point out any reason as to why the decision of the Gujarat High Court in General Motors (I) Ltd. (supra) should not be followed. In the above facts, the appeal of the Revenue was dismissed.

6. Thereafter, appeals filed by the Revenue on identical question of law were not entertained by following the decisions of this Court in Hindustan Unilever Ltd. (supra). Attention is invited to The Commissioner of Income Tax, Central-III V/s. M/s. Arch Fine Chemicals Pvt. Ltd. (Income Tax Appeal No. 1037 of 2014) dismissed on 6th December, 2016.

7. On the aforesaid decision being pointed out, Mr. Pinto, submits that all these appeals be referred to a larger Bench as there are two contradictory views of this Court, one in the case of Hindustan Unilever (supra) and others taking one view and the other in the case of Miltons Private Limited (supra) and Confidence Petroleum (supra). The two orders are not comparable.

One is at the time of admission and the other is, finally disposing of the appeal. The decision in Hindustan Unilver (supra) finally disposed off the Appeal. While the decision in the case of Miltons Private Limited (supra) and Confidence Petroleum (supra) have only been admitted for further consideration. Therefore, this submission of referring the question to a larger Bench cannot be accepted because as pointed out above, the decision in Miltons Private Limited (supra) and Confidence Petroleum (supra) were at the admission stage and therefore not a concluding view so as to hold that it has definitely taken a different view from the one taken in Hindustan Unilever (supra). Thus, this submission of Mr. Pinto is without any merits.

8. Mr. Pinto, next submits that the decision of this Court in Hindustan Unilever (supra) is not correct. However, no submissions in support thereof are made .

Therefore, no reason has been shown to us at the final hearing, why the decision is Hindustan Unilever Ltd. (supra) is not to be followed. Merely filing of an SLP from the order of Hindustan Unilever Ltd. (supra) would not make the order of this Court bad in law or give a license to the Revenue to proceed on the basis that the order is stayed and/or in abeyance. The Revenue is entitled to challenge the view taken by us following our decision in Hindustan Unilever (supra) by challenging this decision in the Apex Court. However, in the present facts, at this stage, there can be no question of our not following the order in Hindustan Unilever (supra). It may be pointed out that the Delhi High Court in Motor and General Fine Ltd. Vs. Income-Tax Officer, 393 ITR 60 has also adopted the view of the Gujarat High Court in General Motors (supra).

9. In the above view, as the question raised herein stands finally concluded by the decision of this Court in Hindustan Unilever (supra) against the Revenue. Thus, Appeal dismissed.