Receipts for Exercising Voting Rights in a Company is not Taxable: Calcutta HC 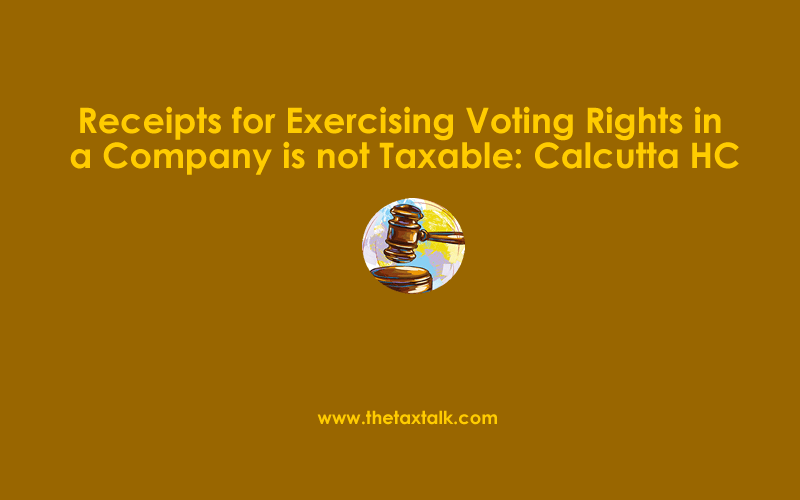 IN THE HIGH COURT AT CALCUTTA

The Court : The legal question raised by the Revenue in this appeal is as to whether the payment received by the assessee for exercising its voting rights in a company in a particular manner would be a capital receipt or a revenue receipt.

In the Bombay case, the matter pertained to the relinquishment by the assessee of the right to use brand ‘Old Spice’. The original owner of Old Spice, Shulton, U.K. had an agreement under which the brand was promoted in India by the assessee. Shulton or the Old Spice brand worldwide was acquired by Procter and Gamble and

Procter and Gamble wanted to market the Old Spice products through its Indian arm. The Indian arm of Procter and Gamble did not want to get into a protracted battle over the control of the brand with the erstwhile Indian promoter thereof and entered into an agreement with the controlling shareholders such that in lieu of a specified consideration, the controlling shareholders would relinquish their right to use the brand and vote accordingly at a general meeting of the company. The Bombay High Court reasoned that such income was not the usual income from business and was a one-off or accidental income relatable to the shareholding of the assessee in a particular company. It was held that such income had to be regarded as a capital receipt.

In the present case, Tyco, USA had a tie-up with the RPG group of companies for the manufacture and sale of certain industrial products in India. The Indian company responsible for manufacturing and selling the products was by the name of RPG Raychem Limited, which was a joint venture between the RPG group in India and Tyco, USA. The assessee, a non-banking financial company, holds 50% of the paid up capital in RPG Raychem Limited. Upon the relaxation of rules for foreign entities conducting business in India, Tyco, USA licensed the right to manufacture and sell the relevant industrial products in India to two its subsidiaries. These subsidiaries sought the assistance of the assessee in this case to ensure that RPG Raychem Limited did not continue rival business in the same industrial products in India. Accordingly, an agreement was entered into by the relevant subsidiaries of Tyco, USA under which the assessee was to vote in a particular manner at a general meeting of RPG Raychem Limited such that Tyco’s specialised business was no longer carried on in India by RPG Raychem Limited. In consideration for voting in the manner agreed, Tyco, Dubai paid certain sums to the assessee and the treatment of such sums fell for consideration before the Assessing Officer and, subsequently, before the Commissioner (Appeals).

Though the Commissioner (Appeals) did not accept the assessee’s contention that this was a one-off payment, it could not be said that the assessee was in the

business of voting in a particular manner at shareholders’ meetings for this to be treated as income from other sources. The Tribunal noticed the Bombay High Court judgment in the Old Spice case and found it to be applicable in the facts and circumstances of the assessee’s matter.

Further, the income obtained by the assessee from exercising its voting rights in a particular manner was a consequence of the investment of the assessee in RPG Raychem Limited. Even by such logic, the income could have been regarded as a capital receipt.

The Appellate Tribunal’s treatment of the matter, particularly, in the light of the judgment of the Bombay High Court, does not call for any reconsideration. The Tribunal appropriately held that since the income was one-off in nature and arose in the context of the appellant, through a company in which the appellant had substantial control, relinquishing a right, it ought to be treated as a capital receipt and not a revenue receipt.

The Appellate Tribunal’s view is endorsed.

There will be no order as to costs.