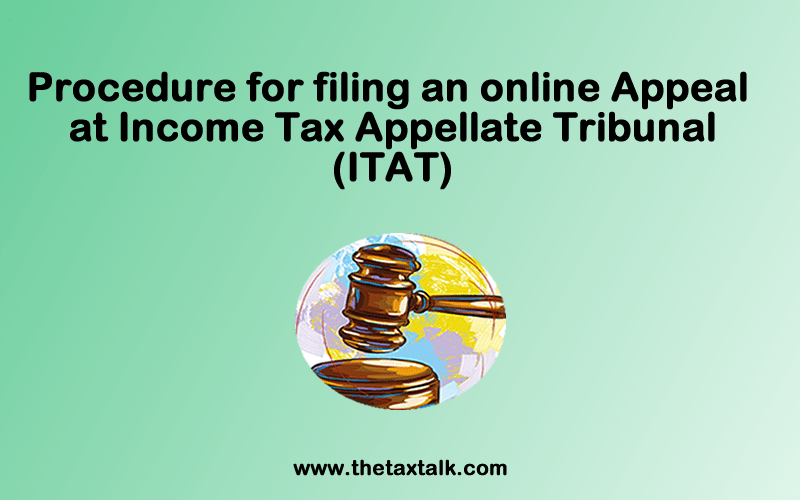 From manual filing, the procedure has not been changed to e-filing procedure.Let us have a look at it:

An Assessee or Assessing Officer or any other person, who is entitled to file an appeal, cross objection or application before the Tribunal u/s. 253 of Income Tax Act, 1961 or relevant provisions of other Direct Tax Acts, may file the same through e-Filing Portal.

Is e-Filing a substitute for normal filing?

No.  e-Filing is an enabling system.  As of now, submission of physical appeal is mandatory even after e-Filing.  After e-Filing of an appeal, paper documents should be submitted within 30 days, failing which the e-filing expires and the acknowledgement becomes invalid.

What are the pre-requisites for e-Filing?

Permanent Account Number (PAN) / Tax Deduction Account Number (TAN) and E-Mail ID of the Appellant are the prerequisites for e-Filing.  All documents required to be filed along with an appeal should be scanned in Black & White PDF format in 150DPI Resolution.  Also ensure that the filenames of the document contains only ‘a-z’, ‘A-Z’, ‘0-9’, ‘_’ , ‘-‘, ‘.’ characters.  File name with any other characters are not allowed.

What is the process of e-Filing?

For detailed instructions for e-Filing, please follow the below referred procure :

On the upper menu block, you need to click at e file option. The procedure given therein is self explanatory and can be done by following step wise procedure.

One need to validate the login by mobile number and email id and the appeal filing fee of Rs. 500 is a precondition for uploading the appeal at ITAT.

Illustration.__ for instance in case the department is Appellant or Respondent, as the case may be, the designation of the officer filing the cross-objections and details pertaining to his office may be filled, if available.

6 .The ‘Tax effect’ for the purpose of filling this Form shall be taken as the difference between the tax on the total income assessed and the tax that would have been chargeable had such total income been reduced by the amount of income in respect of the issues against which croos-objection is intended to be filed (i.e. disputed issues) including applicable surcharge and cess:

Provided further that in cases where returned loss is reduced or assessed as income, the tax effect shall include notional tax on disputed issues:

Provided also that in case of penalty orders, the tax effect shall be the quantum of penalty deleted or reduced in the order to be cross-objected against:

Provided also that while determining ‘total tax effect’, the tax effect on grounds, which forms part of the common grounds of cross-objection, such as where reopening of the case itself is under challenge, shall not be considered separately:

Provided also that where income is computed under the provisions of section 115JB or section 115JC of the Income-tax Act, 1961, the ‘tax effect’, shall be computed as per the following formula, namely: __

C = the total amount of tax as per the provisions contained in section 115JB or section 115JC;

D = the total amount of tax that would have been chargeable had the total income assessed as per the provisions contained in section 115JB or section 115JC was reduced by the amount of disputed issues under the said provisions:

Provided also that where the amount of disputed issues is considered both under the provisions contained in section 115JB or section 115JC and under regular provisions, such amount shall not be reduced from total amount of tax while determining the amount under item D.

We can also help you professionally in filing appeal at ITAT on nominal professional charges of Rs. 10,000/- per Appeal. We are accessible at taxtalknew@gmail.com.