Pay the First installment of advance tax by 15th Jun. What if the advance tax is not paid? 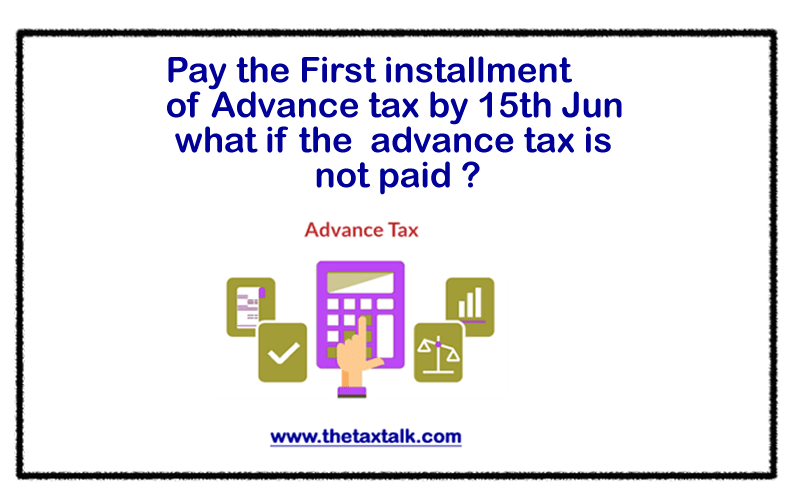 Pay the the First installment of advance tax by 15th Jun . What if the advance tax is not paid?

Advance tax has to be paid by the taxpayer in four installments, as under:

Now, by 15th Jun i.e., taxpayer need to pay tax to the extent of 45% of anticipated total tax. While working out advance tax, deduction under Chapter VI-A towards LIC, PPF etc can also be considered. Also, the amount of TDS can also to be considered and on the balance amount only advance tax liability arises..

If total estimated tax liability for the year is likely to exceed Rs. 10,000, the liability of advance tax arises. Its not only income earned till 15th Jun that attracts Advance tax but all other income that is likely to accrue till 31st March also need to be considered.

The mode of making advance tax is simple and can be done log in at  income tax website at www.incometaxindia.gov.in wherein “e-Payment of Taxes” tab is there. It is self explanatory after every click. Upon successful payment, challan is displayed on the screen which contains all the required details of the payment. Within some time, it also get displayed on the 26AS of the taxpayer. Offline payment can also be done for which taxpayer need to approach the designated bank branch and fill the challan form and pay the taxes.

An important question arises- what if the advance tax is not paid in time. The broader consequences are as under: