Objective of digitization is to convenience taxpayers, not to harass them; HC directed dept to allow Trans. Credits 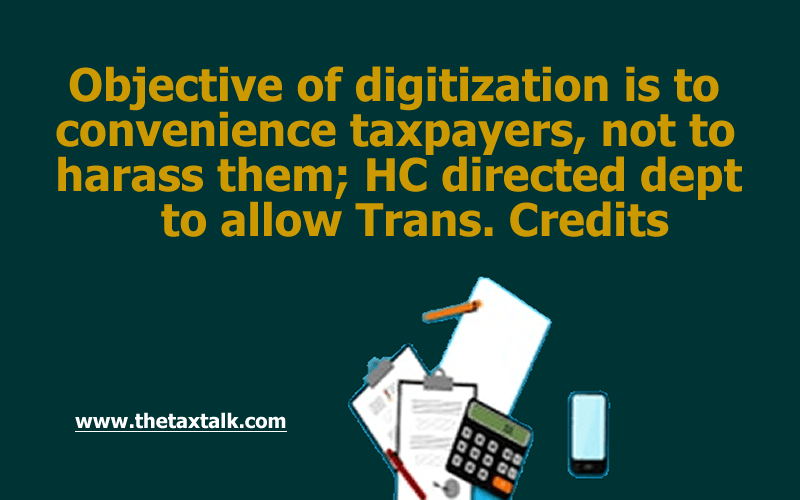 Objective of digitization is to convenience taxpayers, not to harass them; HC directed dept to allow Trans. Credits

The petitioner filed GST TRAN-1 on 27th December, 2017. However, the credit of Rs. 17,07,673/- was not been transitioned in the petitioner’s electronic credit ledger despite the successful filing.

It requested GST Authorities for transitioning of credit and submitted grievance to the authorities but it did not receive any positive response.

It filed writ petition for the same.

The Honorable High Court observed that despite the successful filing of Form TRAN-1 by the petitioner on 27th December, 2017, the request of the petitioner for transitioning of credit was not approved.

Moreover, there was no further explanation or clarification on the issue by the authorities.

The Court noted that the whole objective of digitization is to convenience the tax payers and not to harass them.

Since, it was not disputed that Petitioner’s Form GST TRAN-1 filing on 27th December, 2017 was successful and still credit was not appearing in the petitioner’s electronic credit ledger/register.

Despite making grievance to the authorities, the grievance of the Petitioner was not addressed.

Therefore, it was held that claim of transitional credit cannot be rejected for no apparent fault on the part of the petitioner.

The court also directed the authorities to look into the merits of the claim physically or otherwise verifying the amount of VAT as claimed by the petitioner and take such actions as may be necessary for transitioning the credit within four weeks from the date of this order.