No honest taxpayer or rule compliant stakeholders, including CAs have ever faced any difficulty in the past and nor will they face any problem in future in their interactions with the Department in smooth implementation of the Act: Press Release issued by GST Commissionerate, Faridabad 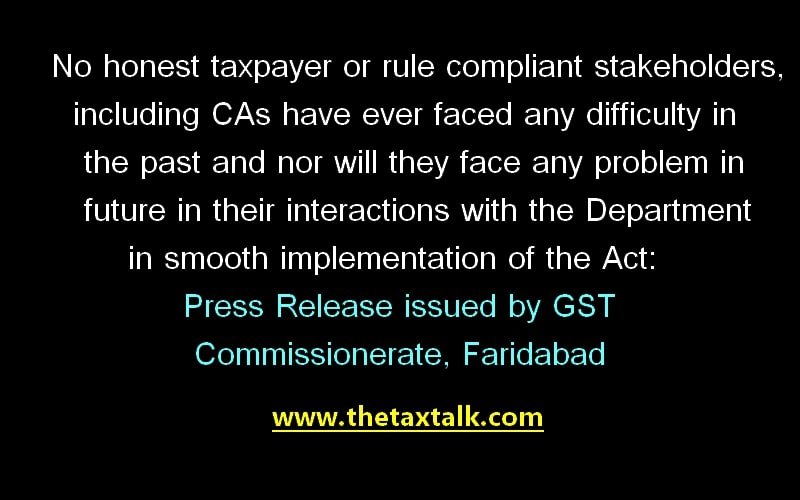 No honest taxpayer or rule compliant stakeholders, including CAs have ever faced any difficulty in the past and nor will they face any problem in future in their interactions with the Department in smooth implementation of the Act: Press Release issued by GST Commissionerate, Faridabad

(Search conducted on CA based In Faridabad)

In pursuance of an investigation into fake invoices of Rs. 47.22 crores (duty involvement of Rs. 10.33 crores) issued by a non-existent firm M/s. F2C Wellness Pvt. Ltd., the team of officers of CGST Commissionerate, Faridabad found evidence that appeared to link CA Shri Tushar Jain as one of the key conspirators cum facilitator for Shri Vinod Bhati, the suspected mastermind in the case. In the said case, as per the investigations conducted so far, Shri Vinod Bhati got the company transferred in the name of Shri Paras Arora & Shri Devpal Sam, by providing copies of KYC documents of these 2 dummy directors to CA Shri Tushar Jain. CA Shri Tushar Jam initially tried to mislead the officers by saying that he had no knowledge of the case but when confronted with electronic evidences, like his Whatsapp chats with Shri Vinod Bhati, admitted his role that he had helped Shri Vinod Bhati in executing this company’s registration and other formalities. When officers of CGST Commissionerate, Faridabad visited the premises of the company, it was found to be non-existent. Further investigations and statement of one of the directors of the firm corroborated the key role of CA Shri Tushar Jain in the said fake invoice case and in various formalities relating to the aforesaid company. In the light of the facts and evidences emerging in the case, searches were conducted at the office as well as residential premises of CA Shri Tushar Jain on 30th July, 2021 as per duly authorised Document Identification Number (DIN) generated search warrants. However, CA Shri Tushar Jain, with the help of his brother Shri Anurag Jain, initially tried to obstruct the official duties of the CGST officers and created trouble outside the premises while search operation was being undertaken. It is also pertinent to mention that some clinching documents, which were part of the investigation, had been discreetly taken away by CA Shri Tushar Jain earlier when he had tendered his statements; these documents were also recovered from his office during yesterday’s search. During search proceedings, CA Shri Tushar Jain admitted that he had taken away these documents deliberately. This very fact also shows the dubious mindset and intention of CA Shri Tushar Jam. Further investigation is underway in the case.

It is hereby stated by CGST Commissionerate Faridabad that searches in the above case have been conducted strictly in terms of the provisions of the CGST Act, 2017. It is further reiterated that no honest taxpayer or rule compliant stakeholders, including CAs have ever faced any difficulty in the past and nor will they face any problem in future in their interactions with the Department in smooth implementation of the Act.