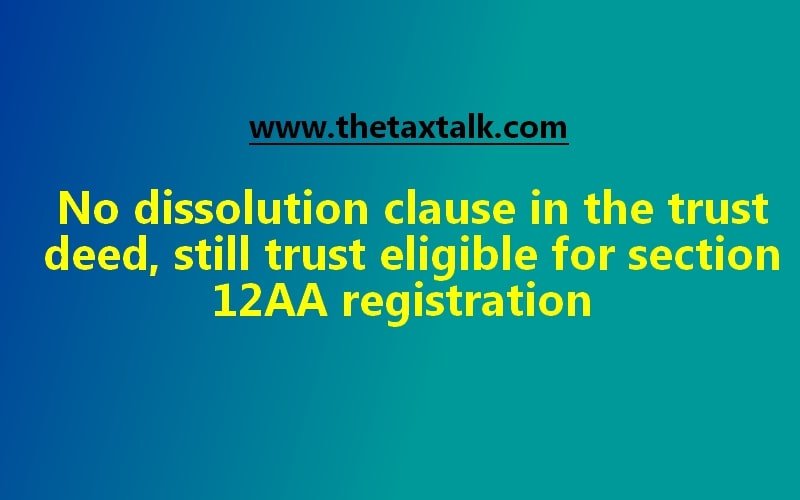 There are lots many trust which are denied the benefit of the registration u/s 12AA for the reason that the trust don’t have dissolution clause.

In some cases, even Commissioner of Income Tax ( Exemption) is asking trust to incorporate the clause regarding dissolution in the trust deed.

Lot many queries are forwarded by the taxpayer at our portal to enquire about the necessity of such clause for registration u/s 12AA.

For ease of reference, the relevant part of the pronouncement in Kamla Nevatia Charitable Trust Vs DIT (Exemption) is produced hereunder:

2.1. After considering the submission of the assessee,the DIT-E held that in order to be eligible for registration the assessee had to be validly constituted public charitable trust, that perusal of trust deed revealed that there was no dissolution-clause to the effect that trust was irrevocable, that the absence of dissolution clause was against the provisions of Bombay Public Trust Act, 1950, that clause 13(f) of the Trust Deed declared the applicant trust to be irrevocable for all times, that the irrevocability was always qua the settler, that the said clause could not be treated a substitute for provision imposing an embargo on the trustee on distribution of trust property among themselves in case of dissolution/ winding up of the Trust,that in the trust-deed there had to be a specific mention about the dissolution of the property on winding up of the trust.The DIT-E made a reference to the provision of Bombay Public Trust Act and held that a trust was a perpetual entity,that if the trustees were unable to carry out the objects of the trust it had to be dissolved or wound up,that on its winding up its corpus and property had to be transferred to another trust having similar objects with sanction of the charity commissioner, that no such clause was found to be in the trust deed, that the assessee could not be said to having constituted as a valid public charitable trust.He rejected the application filed by the assessee for registration u/s. 12AA of the Act.

“3.During the course of hearing before us Authorised Representative(AR)stated that the trust deed was executed on 23.5.2011,that the trust was registered with the charity commissioner Mumbai under Bombay Public Trust Act on 25/5/2005, that it made an application for registration u/s. 12A of the Act on 4.10. 2012,that under the clause 13(f) of the deed it was clearly mentioned that the trust was irrevocable for all time,that as per clause 13(a)of the deed the trustees were empowered to take over/amalgamate with any other trust society or institution,that there was no need to provide for a separate dissolution clause in the deed, that the registration u/s. 12AA of the Act could not be disallowed on the basis of absence of dissolution clause. The AR relied upon the case of Tara Education and Charitable Trust (ITA/1247/Mum/2013 dt.18.7.2014 AY 2013-14).He also relied upon case of Geeta Lalwani Foundation(ITA/3566/Mum/2013 AY 2013-1 4 dt. 2. 1.2015).Departmental Representative (DR)supported the order of the DIT(E).

4.We have heard the rival submissions and perused the material before us.We find that the DIT-E had denied the registration to the assessee-trust because he was of the opinion that in absence of the dissolution-clause assessee-trust was not entitled for registration.We find that in the case of Tara Education and Charitable Trust and Geeta Lalwani Foundation (supra), the Tribunal had held that absesnce of dissolution deed could not be the basis for refusing registration to a trust. In the case of Geeta Lalwani Foundation(supra), the Tribunal has held as under :-

“Regarding the dissolution clause nothing is brought on record even before us that the Bombay Public Trust Act, 1950 mandates for incorporation of mandatory clause of dissolution of any irrevocable trust. Therefore, in our opinion, the decision of the DIT(E) rejecting the registration u/s. 12A was required to be reversed. Accordingly, grounds raised by the assessee are allowed.”

Respectfully following the above referred two decisions of the Tribunal,we decide the effective ground of the assessee in favour of the assessee and direct the DIT(E) to grant registration to the assessee-trust.

As a result, appeal filed by the assessee stands allowed .”

Considering the above,we allow the effective ground of appeal filed by the assessee.DIT-E is directed to grant registration to the assessee.