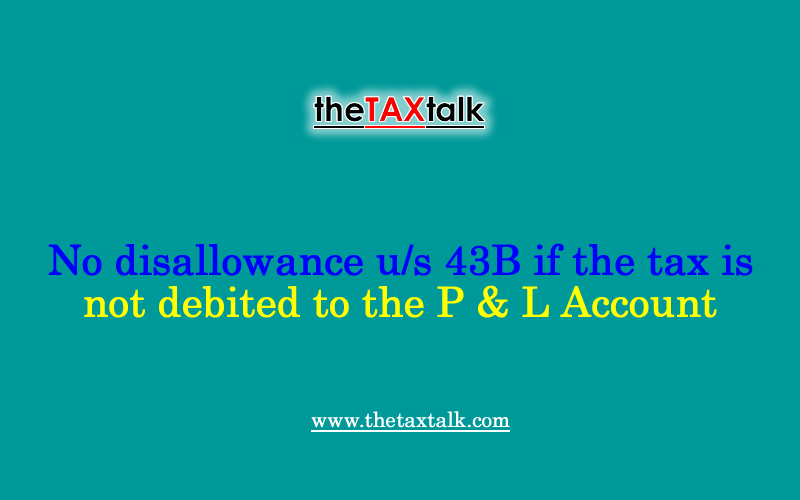 Disallowance under Section 43B is one of the most disputable issue in the I.T. Act – 1961. Question often emerges whether GST / sales-tax/ Excise/ Profession Tax et  collected but not paid would form part of the disallowance if it is treated as a current liabilities by the assessee and not debited to the P & L A/c.

This is what was held by High Court Of Madras in Commissioner Of Income Tax Vs. Everest Litho Press which has duly distinguished CIT vs. Southern Explosives Co. (2000) 242 ITR 107 (Mad).

It was held that Section 43B is not attracted at all when the assessee does not claim any deduction of the amount; since the question raised by the Revenue does not bring out the real controversy in issue viz., disallowance of unpaid sales-tax the question referred regarding taxability of sales-tax as part of business income or trading receipt is returned unanswered.

For ease of reference, the copy of the judgment is produced hereunder:

At the instance of the Revenue, the Tribunal has stated a case and referred the following question of law under Section  256(1) of the IT Act :

“Sec. 43B—Certain deductions to be only on actual payment.—Notwithstanding anything contained in any other provision of this Act, a deduction otherwise allowable under this Act in respect of—

(a) any sum payable by the assessee by way of tax or duty under any law for the time being in force, or

(b) any sum payable by the assessee as an employer by way of contribution to any provident fund or superannuation fund or gratuity fund or other fund for the welfare of employees, shall be allowed (irrespective of the previous year in which the liability to pay such sum was incurred by the assessee according to the method of accounting regularly employed him) only in computing the income referred to in Section  28 of that previous year in which such sum is actually paid by him.”

Tags: Disallowance if Tax is not debited to P & Lsection 43B