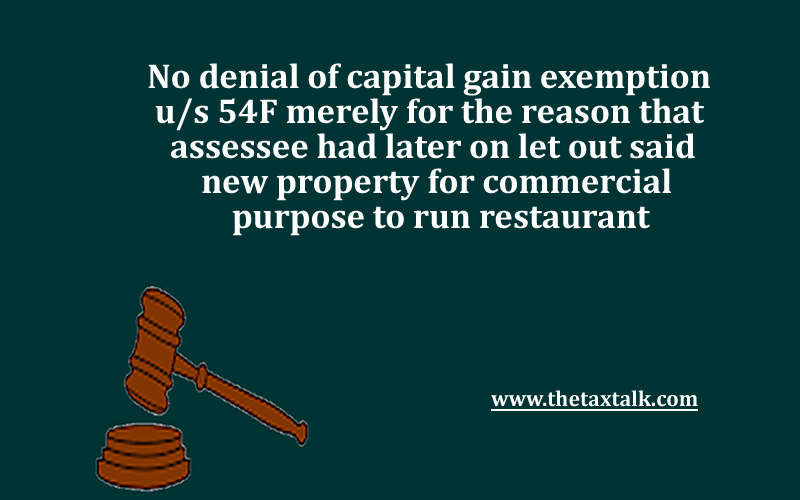 The key observation by Madras High Court in the case of

Where reopening notice was issued against assessee on ground that land sold by it was situated within limits of city corporation and same could not be treated as an agricultural land as claimed by assessee, since assessee had already brought entire details about sale of land during original assessment and Assessing Officer had no new tangible material available to clarify its reopening, impugned reopening was unjustified

Where assessee had sold a land and invested sale consideration in purchase of new residential property, merely because assessee had later on let out said new property for commercial purpose to run restaurant in it, assessee could not be denied exemption under section 54F.The complete case is reproduced hereunder:

Section 2(14), read with section 148, of the Income-tax Act, 1961 – Capital gains – Capital asset (Reassessment) – Assessment year 2011-12 – Assessee sold a land on 18-1-2011 for sale consideration of certain amount – Assessee filed its return of income contending that said land was agricultural land and, thus, capital gain on its transfer was exempt – Same was accepted and return of assessee was processed under section 143(3) – Subsequently, Assessing Officer issued a reopening notice against assessee on ground that land sold by assessee was situated within limits of city corporation and same could not be treated as an agricultural land – Accordingly, he assessed sale consideration from sale of lands as long-term capital gains – It was noted that Tribunal found that land sold by assessee came within corporation limits by virtue of Government order no. 97, dated 19-7-2011 – Thus, when assessee sold such land it was not within city municipal corporation limits – Tribunal further found that assessee had already brought entire details about sale of land during original assessment – Said Government notification was also very much available when original assessment was completed and Assessing Officer had no new tangible material available to clarify its reopening – Tribunal also noted that in case of assessee’s spouse who was co-owner of very same land, same was treated as agricultural land and said finding was undisturbed – Whether, on facts, impugned order passed by Tribunal holding said reopening notice as unjustified was to be upheld – Held, yes [Paras 12 to 14] [In favour of assessee]

‘1. Whether on the facts and in the circumstances of the case, the Tribunal was right in quashing the reassessment order made under section 147 on the ground that it was merely case of change of opinion especially when the AO had not formed any opinion in the first instance on the issue relating to transferred capital assets?

For all the above reasons, the appeal filed by the revenue is dismissed and the substantial questions of law are answered against the revenue. No costs.