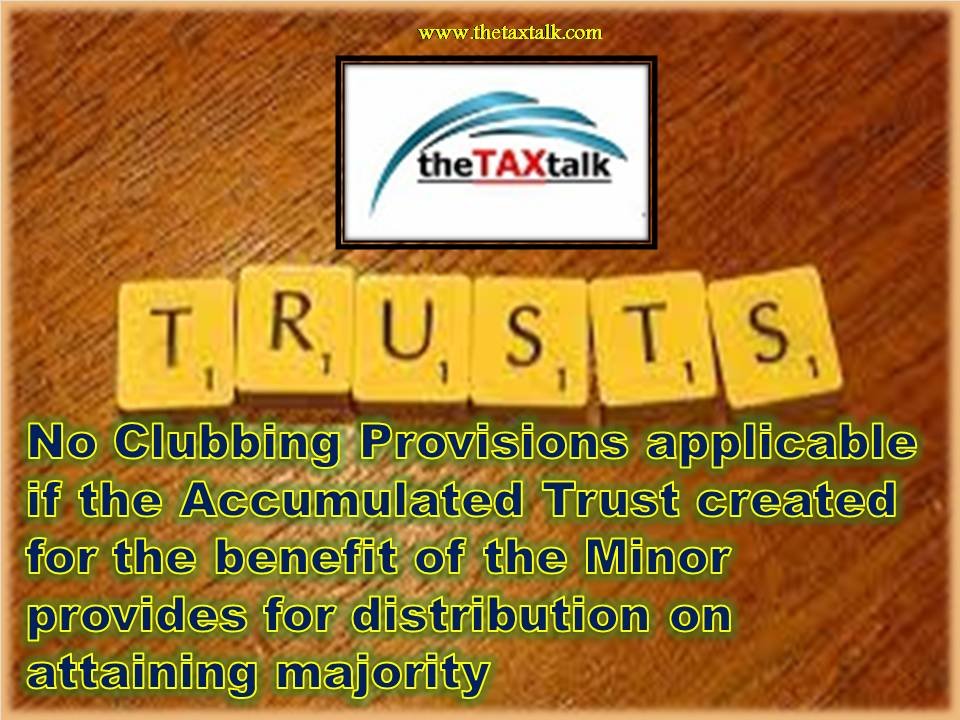 Here is a copy of the landmark judgement in the case of Commissioner Of Income Tax, vs M.R. Doshi (Dead) By Lrs. on 27 September wherein the taxation aspect of the accumulating trust of minor was involved.

2). The assessee, an individual, had executed two deeds of trust and a supplementary deed, the cumulative effect of which was that the income from the trusts was to be accumulated until the attainment of majority by his three sons. The cumulative income was then to be divided into three equal shares and the respective l/3rd share of each son was to be paid to him. The question was whether the income from the trusts could be included in the total income of the assessee under the provisions of Section 64(1)(v) of the Income-tax Act, as it then read. Section 64(1)(v), so far as it is relevant for our purpose, reads thus :

3). In the judgment in the assessee’s own case Addl. CIT v. M. K. Doshi , the Gujarat High Court held, on a construction of Section 64(1)(v), that the income from the transfer of assets can be included in the income of the transferor provided that, under the transfer, the benefit from such assets was immediately available or was deferred for the spouse or minor children of the settlor. In other words, the mischief of tax evasion by assessees by transfer of their assets, such as by settlement or by trust, so as to make the income of such transferred assets available to their spouses or minor children without subjecting the same to tax in the hands of the settlors, was sought to be avoided by providing that such income would be includible in the hands of the settlors provided that the benefit from the income of such assets was either immediately available to or was deferred for the benefit of their spouses or minor children. If the child for whom the benefit was provided was to receive it on attaining majority, the provision contained in clause (v) was not attracted on the plain reading of clause (v) itself, because, otherwise, the Legislature would not have expressed itself in the manner in which it did. Reliance was placed upon Yogindraprasad N. Mafatlal v. CIT where the same view was taken.

5). As the facts show, the trusts in the present case have this cumulative effect, that the income there from is to be accumulated until the attainment of majority by the assessee’s three sons ; the cumulative income is then to be divided in three equal shares and one. such share is to be paid to each son. The payment, therefore, is to be made after each of the sons attains majority. Section 64(1)(v) requires, in the computation of the total income of an assessee, the inclusion of such income as arises to the assessee from assets transferred, otherwise than for adequate consideration, to the extent to which the income from such assets is for the immediate or deferred benefit of, inter alia, his minor children. The specific provision of the law, therefore, is that the immediate or deferred benefit should be for the benefit of a minor child. Inasmuch as in this case the deferment of the benefit is beyond the period of minority of the assessee’s three sons, since the assets are to be received by them when they attain majority, the provisions of Section 64(1)(v) have no application.

7). In the result, the appeal fails and is dismissed. No cost