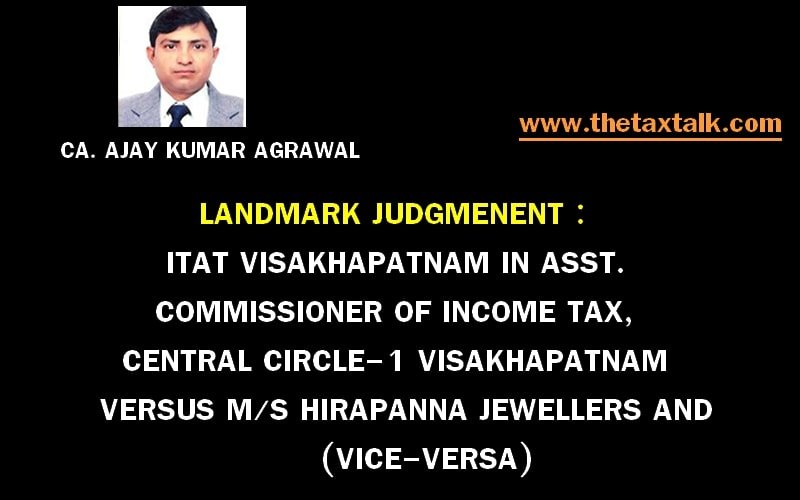 Addition u/s 68 r.w.s 115BBE – assessee had deposited the sum in high denominations of specified bank notes (SBNs) post demonetization – CIT-A deleted the addition – HELD THAT:- The assessee produced the newspaper clippings of The Hindu, The Tribune and demonstrated that there was huge rush of buying the jewellery in the cities consequent to declaration of demonetization of ₹ 1000 and ₹ 500 notes on 08.11.2016.

As cash receipts represent the sales which the assessee has rightly offered for taxation. We have gone through the trading account and find that there was sufficient stock to effect the sales and we do not find any defect in the stock as well as the sales. Since, the assessee has already admitted the sales as revenue receipt, there is no case for making the addition u/s 68 or tax the same u/s 115BBE again. This view is also supported by the decision of Hon’ble Delhi High Court in the case of Kailash Jewellery House [2010  – DELHI HIGH COURT] and Vishal Exports Overseas Ltd. [2012  – AHMEDABAD HIGH COURT]

Hence, we do not see any reason to interfere with the order of the Ld.CIT(A) and the same is upheld. – Decided against revenue.

Since, the assessee failed to furnish the evidences of CCTV footage, KYC documents etc. for abnormal sales on 08.11.2016 the AO believed that the sales stated to have been made between 8.15 p.m. to 11.58 p.m. amounting to ₹ 4.71 crores consisting of 270 bills are nothing but unexplained cash credits representing unaccounted money brought in to the business in the guise of jewellery sales and the paper work was done, merely to give the colour of authenticity of sales and accordingly made the addition of ₹ 4,71,31,500/- u/s 68 r.w.s.115BBE of the Act and taxed the same @60%.

4.1. The Ld.CIT(A) after having considered the submissions of the Ld.A.R found merit in the arguments of the assessee and agreed with the assessee’s argument that

due to unexpected announcement of demonetization on the night of 08.11.2016 the public largely purchased the the jewellery as alternative for exchange of currency, and held since, the sales were credited in the assessee’s books of accounts as revenue receipt and offered for taxation, the same amount cannot be taxed again u/s 68 of the Act as unexplained cash credit.

The ld. CIT(A) also observed that there was ample evidence to show that there were large number of public thronged the jewellery shops on 08/11/2016, and thus held that there is no justification for the AO to treat the sum of ₹ 4,71,35,000/- as unexplained cash credit and accordingly deleted the addition and allowed the appeal of the assessee.

The Ld.DR argued that it is impossible to believe that

the assessee had prepared 270 bills in short span of time and made the sales to the extent of ₹ 4.71 crores when the daily sales of the assessee was ₹ 10 – 16 lakhs in normal period and ₹ 40-50 lakhs per day in the peak time and ₹ 1.5 to 3 cores on specific occasions like Dhanteras etc.

The Ld.DR further argued that in the absence of CCTV footage, details of KYC of customers, non availability of details of tag numbers of the jewellery, non identification of the customers, the AO rightly held that the sum of ₹ 4.72 crores was nothing but sham transaction to bring unaccounted money in the guise of jewellery, sales and paper work is nothing but a device.

Therefore, argued that the AO rightly made the addition and the deletion of addition by the Ld.CIT(A) is bad in law.

The Ld.AR also distinguished the case laws relied upon by the Ld.DR stating that facts are not identical and none of the case laws relied upon by the DR are applicable in the assessee’s case. In none of the cases, sales that were offered for taxation, was brought to tax again u/s 68 and hence argued that the Ld.CIT(A) has rightly deleted the addition and no interference is called for in the order of the Ld.CIT(A)..

From the perusal of section 68, the sum found credited in the books of accounts for which the assessee offers no explanation, the said sum is deemed to be income of the assessee. In the instant case the assessee had explained the source as sales, produced the sale bills and admitted the same as revenue receipt. The assessee is engaged in the jewellery business and maintaining the regular stock registers. Both the DDIT (Inv.) and the AO have conducted the surveys on different dates, independently and no difference was found in the stock register or the stocks of the assessee.

“8. The Tribunal was of the view that the assessee had sufficient cash in hand.

In the books of account of the assessee, cash balance was usually more than ₹ 81,000. There is no reason to treat this amount as income from undisclosed sources. It is not a fit case for treating the amount of ₹ 81,000 as concealed income of the assessee and consequently imposition of penalty was also not justified in this case.”

“It is, in my view, a fundamental principle governing the taxation of any undisclosed income or secreted profits that the income or the profits as such must find sufficient explanation at the hands of the assessee. If the balance at hand on the relevant date is sufficient to cover the value of the high denomination notes subsequently demonetised and even more, in the absence of any finding that the books of account of the assessee were not genuine, the source of income is well disclosed and it cannot amount to any secreted profits within the meaning of the law.”

All the decisions cited supra suggest that once, the assessing officer accepts the books of accounts and the entries in the books of accounts are matched, there is no case for making the addition as unexplained. Hon’ble Delhi High court considered the issue of taxing the opening stocks in the case of Principal Commissioner of Income Tax, 20, Delhi. v. Akshit Kumar, [2021] 124 taxmann.com 123 (Delhi),and upheld the order of the ITAT in deleting the addition related to sales. The Hon’ble High Court has extracted the relevant part of the order of the ITAT which reads as under:

“17. Thus, in our opinion the sale made by the assessee out of his opening stock cannot be treated as unexplained income to be taxed as ‘income from other sources’; firstly, the stock was available with the asssessee in his books of account and trading in such stock including purchase, sale, opening and closing stock (quantity wise and value wise) has been accepted by the department year after year and in some years under scrutiny proceedings, therefore, non existence of stock or business cannot be upheld; secondly, the sale of stock in the earlier years and the sale of balance left out stock in subsequent years has been accepted or has not been disturbed, then to hold that no stock was sold in this year and remained with the assessee will be difficult proposition; thirdly, inquiry and inspection by the AO done much after the closure of business may not be persuasive for the past events especially in wake of facts as discussed above; and lastly, once neither any item in the trading account, nor gross profit has been rejected, then one part of credit side of the trading account, that is, sales cannot be discarded completely so as to hold that it is unexplained money.”

7.2. In the instant case the assessee has established the sales with the bills and representing outgo of stocks. The sales were duly accounted for in the books of accounts and there were no abnormal profits. In spite of conducting the survey the AO did not find any defects in sales and the stock. Therefore we do not find any reason to suspect the sales merely because of some routine observation of suspicious nature such as making sales of 270 bills in the span of 4 hours, non availability of KYC documents for sales, non writing of tag of the jewellery to the sale bills, non-availability of CCTV footage for huge rush of public etc. The contention of the assessee that due to demonetization, the public became panic and the cash available with them in old denomination notes becomes illegal from 09.11.2016 and made the investment in jewellery, thereby thronged the jewellery shops appear to be reasonable and supported by the newspaper clippings such as The Tribune, The Hindu etc. It is observed from the newspaper clippings that there was undue rush in various jewellery shops immediately after announcement of demonetization through the country.