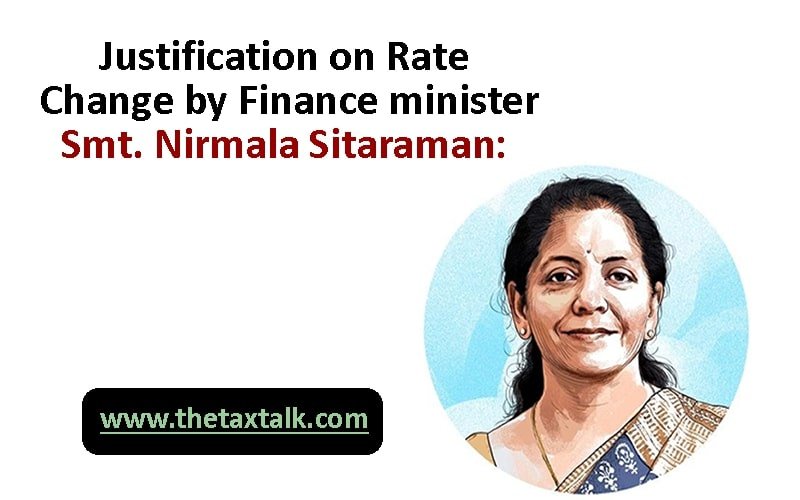 The GST Council has exempt from GST, all items specified below in the list, when sold loose, and not pre-packed or pre-labelled. They will not attract any GST. The decision is of the GST Council and no one member.

Recently, the GST Council in its 47th meeting recommended to reconsider the approach for imposition of GST on specified food items like pulses, cereals, flour, etc. There have been a lot of misconceptions about this that have been spread. Here is a post to lay the facts:

Is this the first time such food articles are being taxed? No. States were collecting significant revenue from foodgrain in the pre-GST regime. Punjab alone collected more Rs 2,000 crore on food grain by way of purchase tax. UP collected Rs 700 crore.

Taking this into account, when GST was rolled out, a GST rate of 5% was made applicable on BRANDED cereals, pulses, flour. Later this was amended to tax only such items which were sold under REGISTERED brand or brand on which enforceable right was not foregone by supplier.

However, soon rampant misuse of this provision was observed by reputed manufacturers & brand owners and gradually GST revenue from these items fell significantly.

This was RESENTED by suppliers and industry associations who were paying taxes on branded goods. They wrote to the Govt to impose GST uniformly on all packaged commodities to stop such misuse. This rampant evasion in tax was also observed by states.

The Fitment Committee—consisting of officers from Rajasthan, West Bengal, Tamil Nadu, Bihar, Uttar Pradesh, Karnataka, Maharashtra, Haryana & Gujarat—had also examined this issue over SEVERAL meetings and made its recommendations for changing the modalities to curb misuse.

It is in this context that the GST Council in its 47th meeting took the decision. With effect from July 18, 2022, only the modalities of imposition of GST on these goods was changed with no change in coverage of GST except 2-3 items.

It has been prescribed that GST on these goods shall apply when supplied in “pre-packaged and labelled” commodities attracting the provisions of Legal Metrology Act.

For example, items like pulses, cereals like rice, wheat, and flour, etc, earlier attracted GST @ 5% when branded and packed in unit container. From 18.7.2022, these items would attract GST when “pre-packaged and labelled”.

It must also be noted that items specified below in the list, when sold loose, and not pre-packed or pre-labelled, will not attract any GST.

This was a unanimous decision by the GST Council. All states were present in GST Council when this issue was presented by the Group of Ministers on Rate Rationalisation in the 47th meeting held in Chandigarh on Jun 28, 2022.

All states, including non-BJP states (Punjab, Chhattisgarh, Rajasthan, Tamil Nadu, West Bengal, Andhra Pradesh, Telangana, Kerala) agreed with the decision. This decision of the GST Council is yet again by consensus.

Further, the GoM that recommended these changes was composed of members from West Bengal, Rajasthan, Kerala, Uttar Pradesh, Goa & Bihar and was headed by CM of Karnataka. It carefully considered this proposal, taking into account the tax leakage.

To conclude: this decision was a much-needed one to curb tax leakage. It was considered at various levels including by officers, the Group of Ministers, and was finally recommended by the GST Council with the complete consensus of all members.