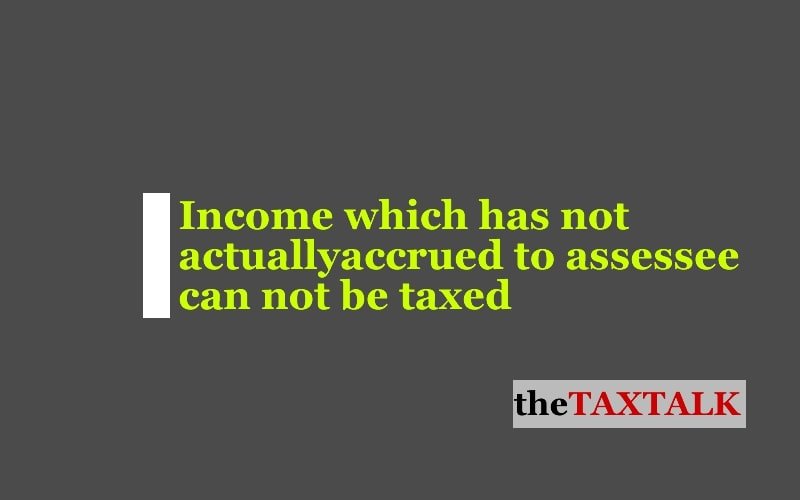 The Assessee company claimed a sum received in settlement by Government of India against default receivable from Government of Iraq as exempt from tax stating it was not business receipts from execution of contracts from Government of Iraq but only financial assistance from GOI and was capital receipt.
AO treated the sum as business receipts from execution of foreign project sand taxed as profits. Expenditure related to foreign projects of assessee was allowed, as expenditure in earlier years under changed method of accounting adopted by assessee.
Besides, assessee was granted deduction u/s 80HHB to extent of reserve created. As CIT (A) partly allowed assessee’s appeal, assessee filed present appeal.
On Appeal, ITAT on an issue as to whether where income has not actually accrued to assessee, can it be taxed held as ” NO”.

It observed as under:

ITAT stated that income would accrue when there arose a corresponding liability of other party from whom income became due to pay that amount.
Only then could it be said that for purposes of taxability the income was not hypothetical and had really accrued to assessee. In present case, as income had not accrued to assessee, it could not be termed as business income. Settlement received from GOI did not come under purview of business income as there was no business during the period.
Besides, contracts between assessee and Government of Iraq were not completed due to war situation and UN Sanctions. There was no hope for assessee to conduct any business but foreign exchange loans extended to assessee through Exim Bank and SBI by GOI was a liability to assessee.
Thus, settlement received in lieu of this would not form revenue receipt.

Tags: Income which has not actually accrued to assessee can not be taxed