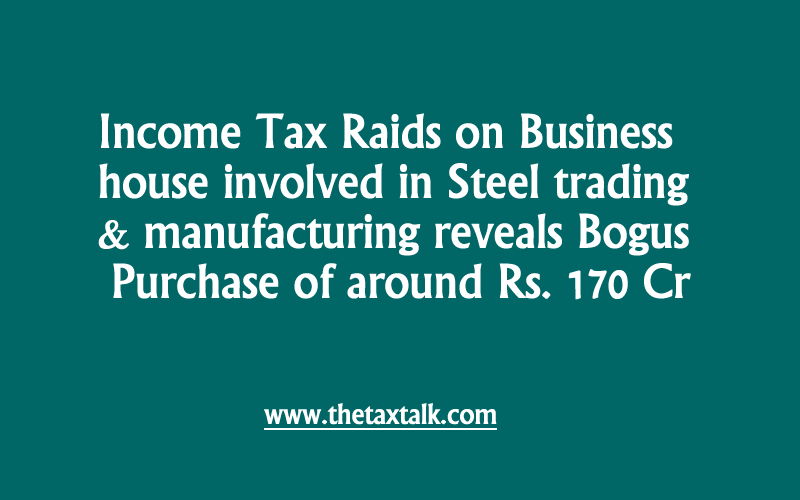 Income Tax Raids is now showing the usage of information flow and the data base of income tax department and the way the department has evolved over a period of time. Now, the disclosure in not in Million but Billions. The implcaitons would be higher if the consequential part is also covered. It may be noted that now effective income tax rate raid during search could range from 84% to 138% due to enormous penal consequences.

Let us know about the raid at Odisha & Assam as revealed by the CBDT press releases:

The Income Tax Department has carried out search and seizure operations on 03/12/2020 in the case of a Group involved in the manufacturing and trading of steel products having premises in and around Rourkela, Odisha. The Group entities were booking bogus purchases of around Rs. 170 crore for two financial years in the name of 17 bogus entities. All the 17 parties have confessed in the statements recorded during the course of search and seizure operation, that they were unaware of any such business concerns in their name. It is also observed that the total amount was withdrawn in cash from the bank accounts of these bogus entities. Further, all the proprietors or directors of the bogus entities are daily wage labourers or from economically weaker sections.

It may be noted that the income tax raid at Assam also reveals the astonishing figure of undisclosed income. The same can be ascertained from the following press release issued by the department:

The main allegations against the group are that it has routed accommodation entries of more than Rs.23 crore and Rs.62 crore in the form of non-genuine share capital and non-genuine unsecured loans respectively, through certain Kolkata-based shell companies. All this was done by suppression of its true net profit.

During the course of the search action, it has been established that the group engages in out-of-books transactions. Handwritten documents/Diaries regarding cash transactions have been recovered which are not reflected in the regular books of accounts. Such transactions detected so far across all the locations combined is upwards of Rs.150 crore, of which payments made of a total of more than Rs.100 crore have been found to be violative of various sections of the Income-tax Act, 1961. Such seized documents are voluminous and are being investigated further.

Further, loan transactions made in cash were also found to be more than Rs.10 crore. Stock difference of more than Rs.7 crore was found and no cogent explanation regarding the same was provided.

In the office of the Kolkata-based shell company acquired by one of the entities of the group, no books of accounts and ROC mandated documents were found, proving the same to be a bogus entity used only to route unaccounted income of the group.

Unexplained cash of approximately Rs.3.53 crore has also been found during the search, which has been seized by the Department. Cash investments in Share Capital during demonetization period were also detected.