Age has special privileges in the Income Tax Law 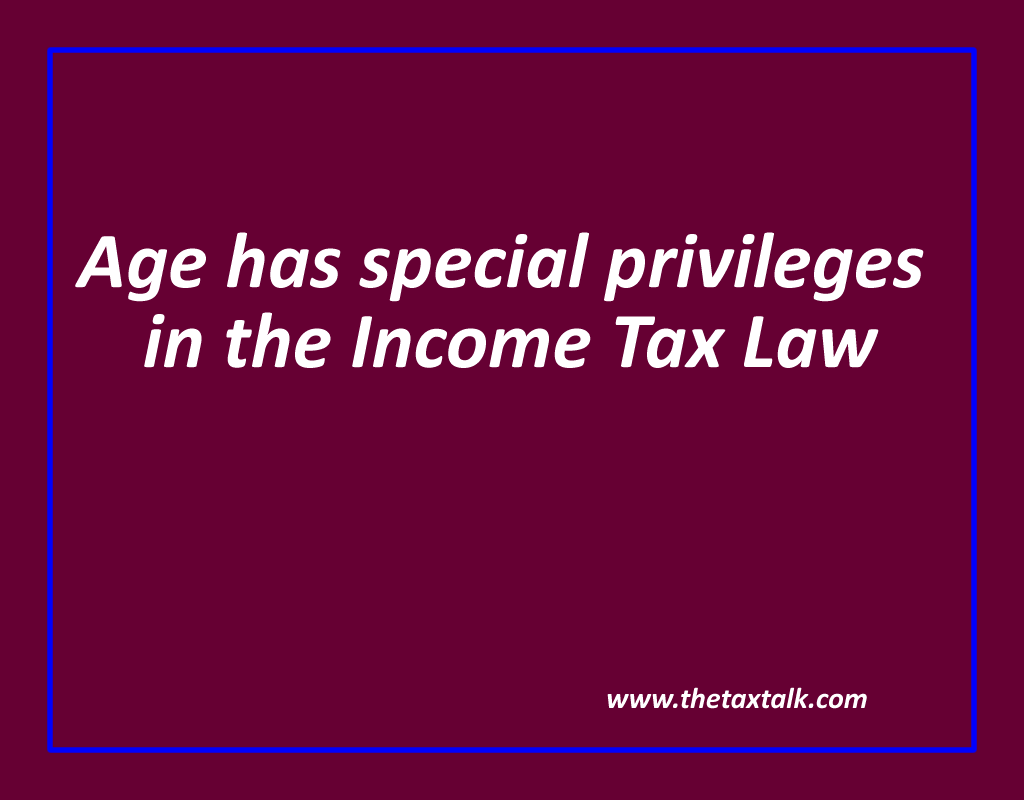 Age has its privileges in the Income tax law. Not only benefit of higher basic exemption limit, senior citizen or very senior citizens are favored by the Income Tax Act by following additional tax bonanza:
a] Higher deduction u/s 80D towards mediclaim payment or medical expenditure
b] Higher deduction u/s 80DDB towards expense on medical treatment of specified ailments.
c] Exemption from payment of advance tax if senior citizens don’t have any income chargeable under the head “Profits and gains of business or profession”,
d] Forms 15G and 15H are the declaration forms to seek exemption from TDS on interest payment. Form No. 15H is for senior citizens whereas Form No. 15G is for non senior citizens. 15G cannot be filed by any person whose income from interest on securities/ interest (other than “interest on securities”) exceeds the applicable basic exemption limit.

e] E-filing is made mandatory for individual if (i) the total income is more than Rs. 5 Lacs or (ii) if there is a refund claim. However, very senior citizens can file return in paper mode in such cases.

I am Resident Indian Woman Salaried, taxpayer of about 58 yrs working in a private, self funded engineering college. I was terminate from service on 16th June 2002 and was reinstate in service on 25th September 2004 by an order of Hon’ble Bombay High Court. On 6th November 2015, I have received an amount of INR 2,59,818 as back wages (by the order of Hon’ble Bombay High Court) from my employer, details of which are as follows:

Please advise me the tax treatment of amount of back wages and interest received in November 2015. [Girija Maheshwari- gmrmrmacet@yahoo.co.in]

Similarly, arrears of salary / back wages, even if it may be pertaining to earlier years, shall be taxable as the income of the year in which it is receive. However, in respect of arrears pertaining to FY 2002-03 to 2004-05 & received in the current year, you can get a relief provided u/s 89(1) of the Income Tax Act-1961 read with Rule 21A(2). Relief u/s 89(1) would almost nullify the excessive tax implication arising in the FY 2015-16 as a result of clubbing of earlier years salary income with current years income.

Coming to specific point of your query, it may be note that