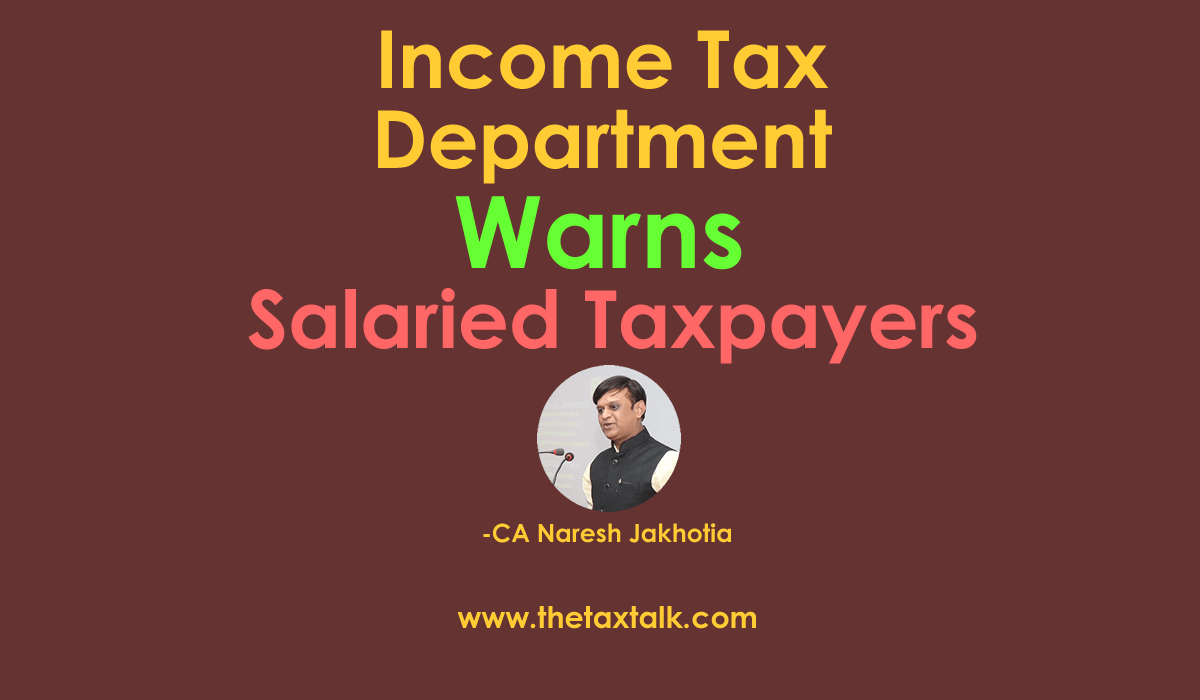 Salaried taxpayers are in the lime lights for two counts. First, income tax returns forms are amended so as to seek more details from the salaried class of taxpayers. It requires the employees to give break-up of their salary in to basic taxable salary, allowances, perquisites, etc. & also the detail break-up of all exempt allowances. Second, CBDT has issued warning signals to the salaried class of taxpayers against tax evasion who have limited options to save tax and are often considered as one of the most honest class of taxpayers. The present warning came as a surprise for many. However, there is a considerable background for such warning.

Taxpayers would recall the recent tax refund scam at Bengaluru wherein several employees of reputed companies like Infosys, ICICI Bank, Vodafone, CISCO, IBM with the help of nefarious tax consultant have caused loss to the exchequer to the tune of 18 Cr. Around 1000 returns have been identified by the department wherein fraudulent claims have been made. Similar instances have been noticed in the past in Bhilai- in central India & other parts of the countries wherein almost same modus operandi was used. Result-Department is getting more serious. Present warning is a clear signal to such unscrupulous taxpayer and tax consultants.

In many cases, salaried taxpayer indulges in such malpractices not because they are dishonest but because of unscrupulous intermediaries promising refund or lesser tax liability by illegal means which they are not aware of. Obviously, ignorance of law is no excuse & taxpayers would be required to face the cost & consequences.

Some of the most common errors committed by salaried taxpayers while filing their income tax returns, resulting in under-reporting or misreporting of income, are as under:

No documents are now required to be submitted along with income tax return. It has enabled to make claim easy, even false claim also.  With inter linking of multiple data like salary details in 26AS, Form No. 16, the recognition of false claim is easy for the department as well.  Various sections under chapter VI-A wherein wrong claims are made by the taxpayers are
a] Tax Saving Investment u/s 80C
b] Interest on education loan u/s 80E
c] Deduction form Mediclaim policies u/s 80D
d] Donations u/s 80G, 80GGA, 80GGC
e] Deductions towards disability or medical treatment u/s 80DD, 80DDB, 80U etc.

Submitting and claiming HRA deduction on the basis of bogus documents is the frequent practice adopted in lot many cases to reduce tax bill. Even, the amount of rent payment is inflated so as to get higher deduction. Salaried taxpayers should avoid temptation to save tax by such illegal means.

Salaried taxpayers sometime have a casual approach and ignore to incorporate the interest income in their ITR. Income tax returns forms are now require disclosure of all the bank accounts details. Further, Adhar has almost been made mandatory for the ITR as well as bank accounts which makes inter-linking easy. Taxpayers need to be more serious in incorporating all the data in the ITR. As non-reporting of such income can trigger inquiry.

Making false exemption under section 10 is one of the common mistakes committed by lot many taxpayers. It includes exemption towards Long Term Capital Gain on shares u/s 10(38), claims towards Medical Re-imbursement. Leave Travel Concessions (LTC/LTA) etc.

Often, higher interest / principal deduction is claimed by the taxpayer for the reason that no documents are required to be submitted with the income tax return. Even claiming 100% interest is claimed by the taxpayer in case of joint owned property with tax-payers shares is not 100%. The present caution advisory is a warning to all such taxpayers.

Not salaried alone, other taxpayers also adopts the practice of inflating development expenses, claiming deduction towards bogus transfer expenses like brokerage, legal fees  etc, or even inflate the false claim towards investment u/s 54, 54F, 54EC, etc. All such instances are already viewed seriously by the department & the taxpayers need to avoid the temptation to save tax through malpractices.

8. Complying with the clubbing provisions:

Salaried taxpayers fails to comply with the clubbing provision, more particularly at the time of retirment wherein huge retirement fund is received and the amount is invsted in the name of the spouse. Any income arising out of the fund transferred to spouse without adequate consideration is subject. To clubbing provision in the hands of the original owner of fund. For examle, if wife is earning interest or other income out of fund/gift received from husband, income would be subject to clubbing provioisn in the hands of husband.

All such offences of under reporting and misreporting of income are punishable. Under existing penal and prosecution provisions of the Income Tax Act. Advisory issued by CBDT has advised the taxpayers not to fall prey to false promises or mis-advice by unscrupulous intermediaries resulting in tax evasion. Not only such violators will not only be prosecuted but their employers will also be asked to take action against them. It is preparing to refer such instances to other law enforcement agencies for appropriate action. Action is also proposed to be taken on such intermediaries and abettors. Who are asked to strictly confine their advice to taxpayers within the four corners of the Income Tax Act.

With linkage of Aadhaar and PAN to all your bank account, loan account, demat account, insurance policies etc, the I-T Department may be able to verify & cross examine many of the claims of the taxpayers. Needless to repeat, the cost of penalty is much less than the cost of compliance’s.