If the PF amount had been deposited within permissible grace period, no disallowance can be made u/s 43B 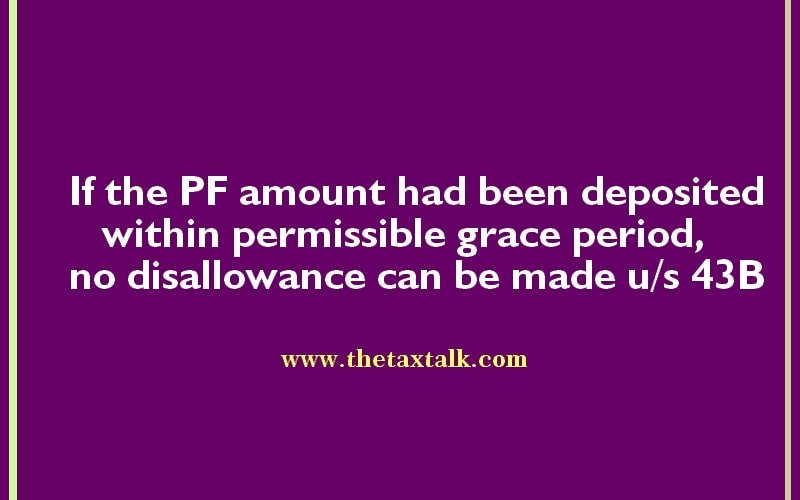 If the PF amount had been deposited within permissible grace period, no disallowance can be made u/s 43B

ITAT Mumbai, in the case of Zyg Pharma Pvt. Ltd. Vs. DCIT has held as under:

Ajay Thakore for the Appellant.: Pavan Ved for the Respondent

“The assessee was liable to pay sales tax amounts collected from 1-11-1989 to 31-10-1996, payments of which were deferred under the scheme, and the amounts were payable after twelve years in six equal annual instalments commencing from 1-5-2003, which meant that the liability was payable in future. Later on, the State Government came out with a scheme by which it was provided that if some dealers opted, then they could pay the future liability at a discounted value or what one may call net present value immediately. Thus, in this situation, it could not be construed as remission of liability, because the State Government had not waived of any of the liability as given in the illustrations. Had the State Government accepted lesser amount after twelve years or reduced such instalments, then it could have been a case of remission or cessation. However, in the instant case the State Government had chosen to receive the money immediately which was receivable from 1-5-2003 to 1-5-2008. The amount of Rs.337.13 lakhs was actually paid to SICOM on 30-10-2002. Thus, it did not satisfy the condition of actual remission in praesenti. It was a simple case of collecting the amount at net present value which was due later on and even the formula for collecting the net present value was also given by the SICOM and the amounts had been paid as per that formula. Therefore, such payment of net present value of a future liability could not be classified as remission or cessation of the liability so as to attract the provisions of section 41(1)(a) [Para 108] ”

Considering facts in totality, in the light of the aforesaid decision of the Tribunal Special Bench, which has been rightly followed by the CIT(A), we do not find any reason to interfere with the findings of the CIT(A). For the reasons stated above, it was to be held that the deferred sales tax liability being the difference between the payment of net present value against the future liability credited by the assessee under the capital reserve account in its books of account was a capital receipt and could not be termed as remission/cessation of liability and, consequently, no benefit would arise to the assessee in terms of section 41(1)(a) [Para 109]

The appeal filed by the revenue is accordingly dismissed.”

On identical facts we have (the same combination) decided a similar issue in the case of M/s. Godrej & Boyce Mfg. Co. Ltd. in ITA No. 6867/Mum/2011 for AY 2005-06, in which we have followed the aforesaid decision of the Tribunal in the case of Sulzer India Ltd. Facts and issues being identical, respectfully following the decision of the Special Bench and our own decision [supra], we have no hesitation in reversing the findings of the CIT(A) and accordingly, ground no.1 with its sub grounds are allowed.