If certain investments have not earned exempt income, no disallowance of expenditure having nexus with such investments can be done 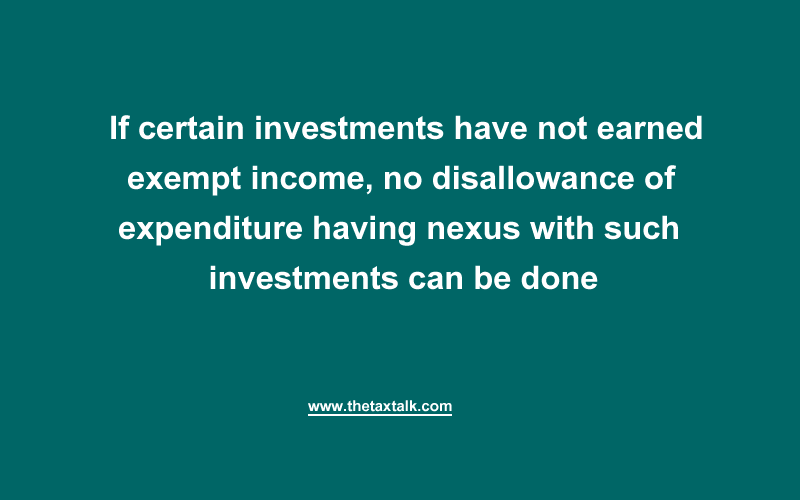 If certain investments have not earned exempt income, no disallowance of expenditure having nexus with such investments can be done

AO observed that assessee has claimed interest expenses against the interest income received from various parties under section 57(iii) of the Act. AO observed that assessee has not proved the interest expenditure is laid out or expended wholly or exclusively for the purpose of making or earning interest income, there is no connection with or relation to the interest income earned and the expenditure claimed are not as per section 57 (iii) of the Act. In the instant case assessee has failed to fulfill the conditions that interest expenditure incurred by him for the purpose of earning the interest income. Accordingly he disallowed the interest expenditure. AO observed that the assessee has shown an amount as dividend income and claimed the same as exempt. The assessee has not shown any expenditure incurred for earning the exempt income. AO invoked the provisions of section 14A read with rule 8D (2) (iii). During the course of search in the case of Bliss GVS Pharmaceutical Group, certain loose papers pertaining to M/s Growmore Investment and Developers Private Limited were found and seized being copies of undated Hundies of Rs. 25 lakhs each which were signed by the assessee, director of M/s Growmore Investment and Developers Private Limited and who was also a co-owner of the property at Hyde Park from whom Bliss GVS Pharma Ltd (BGVSPL) had purchased the office premises as per agreement. During the course of search, Mr. S. N. Kamath of BGVSPL was confronted on these documents, he stated that they have paid cash of Rs. 1.5 crore to GIDPL and offered the same as additional income for financial year 2010-11. AO observed that the amount of Rs. 1.5 crore is taxable in the hands of assessee and Smt Priya, owner of the property as unaccounted cash consideration received for sale of property. Accordingly, 50% of the amount was added to the total income of the assessee, being 50% shareholder as unaccounted cash consideration. CIT(A) sustained the additions made by the AO for the disallowance of interest expenditure, 14A disallowance and undisclosed sales consideration.

Whether if certain investments have not earned exempt income, disallowance of expenditure having nexus with such investments is to be deleted – YES: ITAT

as such there is no clear finding that the cash was actually received by the assessee except that finance manager has confirmed in writing on the back side of the hundies. Other than that there is no other proof linking the assessee to have received the cash from Bliss GVS, moreover in this case, it was found that employee of the Bliss GVS has received the cash. From the hundi transaction and the contents of the hundi, clearly indicate that this transaction was between Growmore Investment and Bliss GVS. Any proceedings has to be taken with these companies and just because there is property transaction by the assessee, the revenue cannot presume itself linking assessee as the beneficiary of the transaction. There is no benefit to Bliss GVS in the concerned transactions and neither to Growmore Investment. Whatever Bliss GVS has paid in cash presumably to the assessee, was received back. AO has linked hundi transaction between Growmore Investment and Bliss GVS with assessee. There is no proof coming out of the documents found during search linking the assessee as the beneficiary except presumption and assumptions of the tax authorities. Since there is no cogent material in the possession of the Revenue to indicate that the assessee has actually received cash from Bliss GVS, the addition made by AO is deleted.