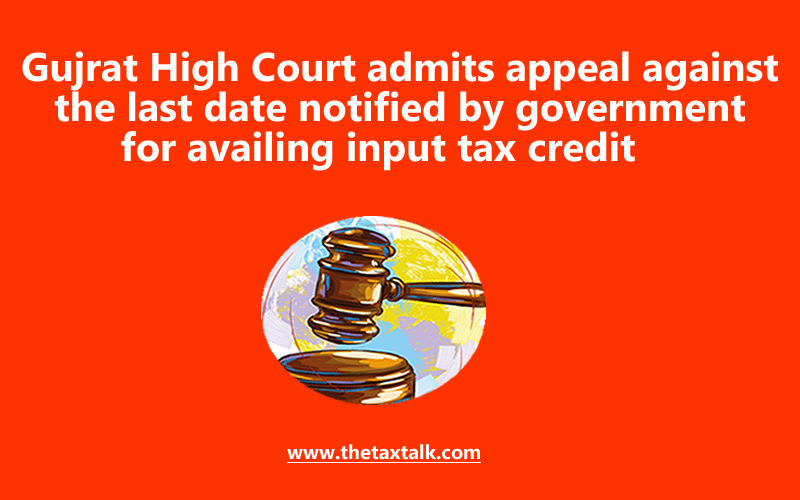 Gujrat High Court admits appeal against the last date notified by government for availing input tax credit relating to the invoices issued during the period from July, 2017 to March, 2018. Notices has been issued by the Hon’ble HC to Center, GST Council and State.

Petitioner challenged the CBIC Press release dated 18.10.2018 in which CBIC notified that the last date for availing input tax credit relating to the invoices issued during the period from July, 2017 to March, 2018 is the last date for the filing of return in form GSTR-3B under Section 16 (4) of CGST/GGST Act and Rule 61 of CGST/GGST Rules,2017. Petitioner challenged the press release on the grounds that it violates Article 19 (1)(g) of the Constitution, right of freedom to carry trade, commerce and intercourse throughout the territory of India.

The petitioner stated that the last date for availing input tax credit in respect of any invoice or debit note pertaining to a financial year is the due date of furnishing of the return under section 39 for the month of September following the end of financial year or furnishing of the relevant annual return, whichever is earlier. Form and manner of submission of monthly return is provided in Rule 61 of the CGST/GGST Rules wherein Form GSTR-3 is mentioned.The petitioner also stated that it is obvious from bare perusal of the Rule 61 of the CGST/GGST Rules that the return prescribed in terms of Section 39 is a return required to be furnished in FORM GSTR-3 and not GSTR-3B.

The petitioner further submitted that decision to add return in form GSTR-3B was taken in 18th GST Council held on 30th June, 2017 on account of the reason stated as “shorter return for first two months of roll out”. It was nowhere mentioned that the same shall be instead of Form GSTR-3.

Hence, the petition prayed for quashing of Press release dated 18.10.2018. Notice was issued to Centre, State and GST Council.t will be a big relief to large number of tax payers in case government accedes to the request.