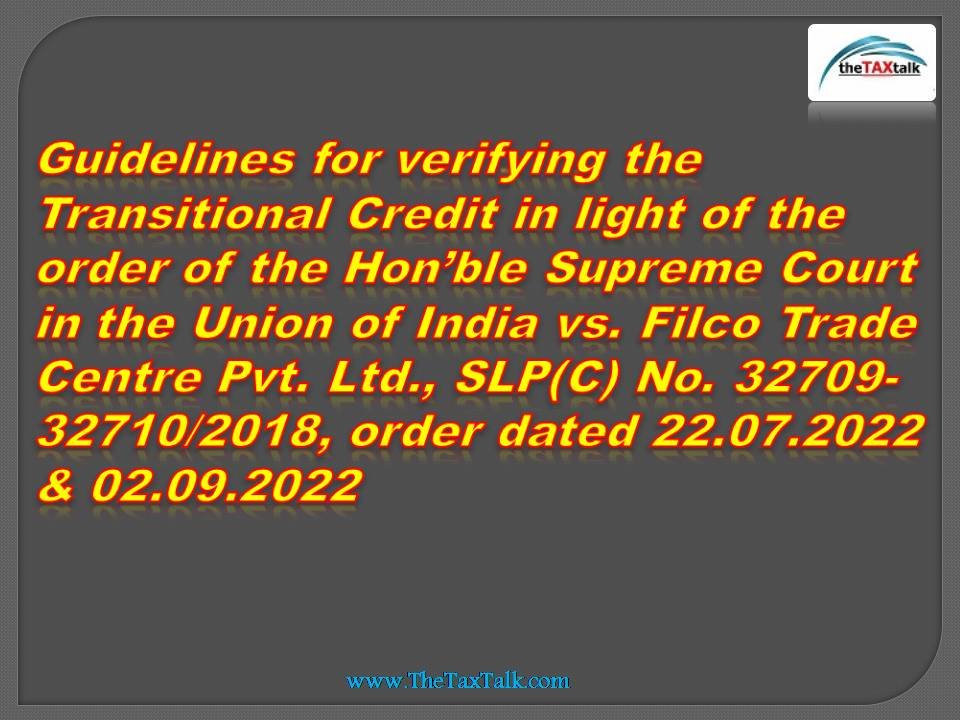 Government of India Ministry of Finance Department of Revenue

Central Board of Indirect Taxes and Customs GST Policy Wing

“The time for opening the GST Common Portal is extended for a further period of four weeks from today.

It is clarified that all questions of law decided by the respective High Courts concerning Section 140 of the Central Goods and Service Tax Act, 2017 read with the corresponding Rule/Notification or direction are kept open.”

5. Verification of the Transitional Credit

1.    Description of Entries in TRAN-1 Table

In the Form TRAN 1 there are only six entries which decide all the CGST credit which is posted in the electronic credit ledger. These entries are briefly described below. It is advised that the full text of law be referred for better understanding of the issue.

2.  CHECKS FOR VERIFICATION OF ENTRIES IN TRAN-1 TABLE:

As a matter of assistance, following checks are suggested in relation to the entries provided in various tables of TRAN 1. The list of checks is not exhaustive but is indicative only based on provisions of law, the likely error and the inputs received from the field formations.

This check should be performed liberally where many units have merged into one registration or a single unit has been split into many (Centralized registration cases / LUT units) in GST. Compliance by any of the merging unit which was filing the returns in the pre-GST would entitle the new unit to avail credit in relation to that merging unit.

Case I: Only exempted goods/services were being manufactured or provided: Rule 6(2) of CENVAT Credit Rules did not allow any credit in the CENVAT register if only exempted goods were being manufactured. No credit can flow from return in relation to inputs in such cases. The entry in table 5(a) therefore should be NIL. The apportionment of credit on inputs and complete reversal thereof under rule 6 of CENVAT Credit Rules took place at the time of removal of goods. Therefore, in such cases only credit of inputs and inputs contained in semi-finished which existed in stock on the day of the transition and for which conditions prescribed in cl (i) to (v) of section 140(3) are satisfied would be available. Where the stock shown is very high, verification using VAT return or any other collateral document where stocks are declared canbe done.

Case II: Exempted and non-exempted goods/services were being manufactured or provided: Rule 6(3) of the CENVAT Credit Rules provided the procedure for apportionment of credit relating to taxable goods/services and reversal of credit relating to exempted goods/services. Credit in table 5(a) would flow from the return in such cases. It should be checked that the return reflects credit after application of rule 6(3) of CENVAT Credit Rules. The reversal in terms of rule 6(3) was required to be done at the time of removal of finished goods. Therefore some credit in Table 7A can arise for such inputs which were in stock and which not attributed till the date of the transition to either exempted goods or non- exempted goods. To avail credit on such inputs, other conditions prescribed in cl (i) to (v) of section 140(3) are required to be satisfied. Where the stock shown is very high, verification using VAT return or any other collateral document, where stocks were declared, can be done.

8.1 Check 9: Check that the duty paying document exist and take confirmation from the taxpayer that the duty or the tax paying document were recorded in the books of account of such person as per the conditions prescribed in law. Where goods under movement are shown in exorbitant quantity, transport verification may be considered.   It should also be checked that the conditions for availing ISD credit as prescribed in law are satisfied.

5. Other relevant information, if any (Please give details):

(Name and designation of counterpart officer)