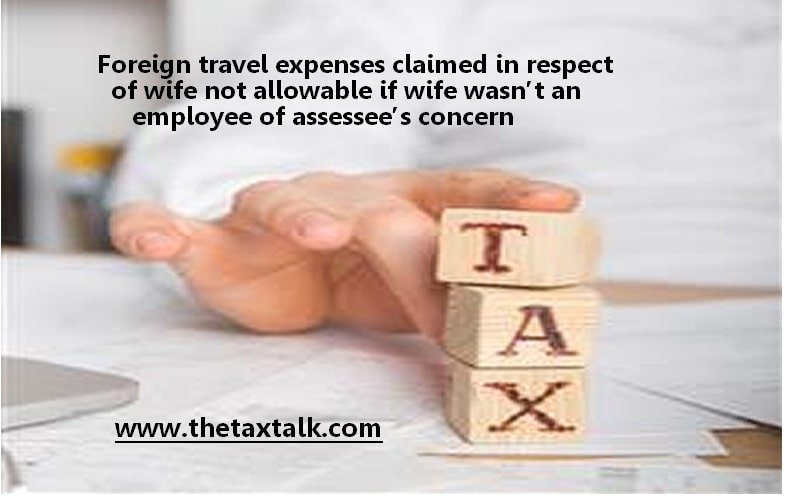 Assessee contended that his wife was an employee of his concern.

Said disallowances were made by AO based on the ground that assessee’s wife accompanied assessee on most of the trips, and accordingly certain amount of personal expenditure would be involved.

Assessee contended that all foreign visits made were for the purpose of business marketing, and the expenses were wholly allowable under Section 37.

However, AO disallowed the claims made under Section 37(1). CIT(A), as well as ITAT, upheld the order of AO.

Assessee contended that though he had produced the details with regard to the salaries, bonus, and group gratuity in respect of his wife, the authorities did not consider the same.

They erroneously concluded that she was not an employee of assessee’s firm. He further submitted that when he had produced the documents regarding the salaries, bonus, and group gratuity received by his wife,

ITAT and CIT(A) should had accepted the case and allowed the appeal. On the contrary, revenue submitted that assessee had not produced any salary certificate of his wife to establish that she was an employee of assessee’s firm.

On appeal, Madras High Court held that ITAT had categorically stated the evidence filed before it was not sufficient to prove that his wife was an employee of its concern because there was nothing on record to establish as to when she was appointed and what was her salary, etc.

When the assessee contended that his wife was an employee, the burden lies on him to establish the said contention.

Though assessee contended that his assessee went aboard in the capacity of Marketing Executive, he had not produced any document to prove that her visit was exclusively for business purposes.

Further, AO observed that since the assessee’s wife had accompanied the assessee on several occasions, the element of the personal tour couldn’t be denied.

Since assessee had failed to prove with relevant documents that his wife was an employee of its proprietary concern and her visit was exclusively for business purpose, impugned expenditure could not be allowed.

Tags: Foreign travel expenses claimed in respect of wife not allowable if wife wasn’t an employee of assessee’s concern