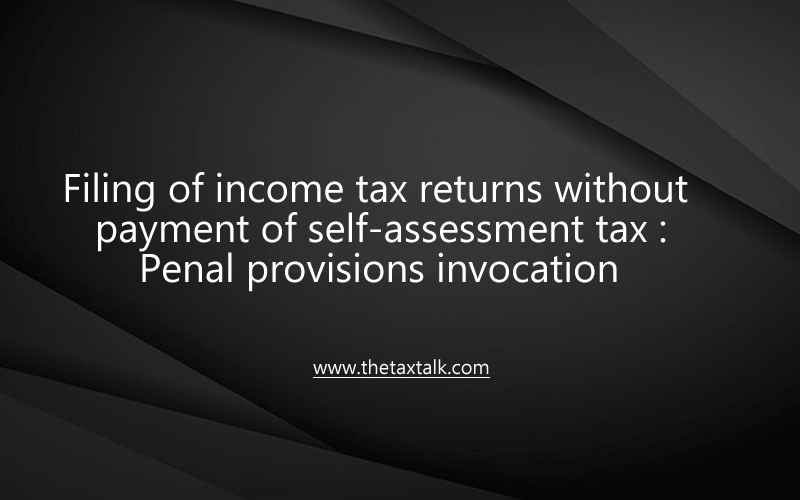 short Overviwe: If due to huge financial crunch and hardships assessee had no liquidity to pay the self-assessment tax liability on time, then penalty under section 221(1) would not be levied and assessee would not be considered as willful defaulter because financial stringency is considered to be good and sufficient cause for not levying penalty under section 221(1).

Assessee-company was engaged in the business of hotel consultancy and operations. AO levied penalty under section 221 on the ground that assessee had not paid the self-assessment tax till the date of filling of return of income. Assessee contended that due to stringent financial difficulties self-assessment tax could not be paid on time, however, the same had been paid in installment over the period of time.

It is held that: Though the assessee could not pay the self-assessment tax at the time of filing return of income but the same had been paid subsequently in installments over a period of time. Moreover, as the assessee had given very elaborate reasons that due to huge financial crunch and hardships, it did not have any liquidity to pay the self assessment tax liability and also there exist umpteen number of judgments, wherein it has been held that financial stringency is considered to be good and sufficient cause for not levying penalty under section 221(1). Hence, AO was not justified in levying penalty under section 221.

The aforesaid appeal has been filed by the revenue against impugned Order, dt. 22-6-2011 passed by learned Commissioner (Appeals) XIX, New Delhi in relation to the penalty levied under section 221(1) for the assessment year 2007-08. In the various grounds of appeal the revenue has challenged the deletion of penalty of Rs. 40,34,524 levied under section 221 by the assessing officer on the ground that assesSee has not paid the self assessment tax till the date of filling of return of income.

However, the self assessment tax of Rs. 8,06,90,485 on the return of income could not be paid on the due date due to stringent financial difficulties. In response to the show cause notice as to why the penalty under section 221(1) could not be levied in the fault of paying the self assessment tax, assessee submitted that, due to stringent financial difficulties the same could not be paid, as the major investment of the assessee in Centaur Hotel has been a failure and has not reaped the benefit which is expected. The hotel has not been operating since April, 2005 and huge capital outlay of the assessee was blocked. All the assessee’s funds were struck up in the said hotel and therefore, due to this deep financial crunch, the self assessment tax could not be paid on time. It was further submitted that due to recession in hospitality business, assessee was forced to retrench its employees and huge amount was to be paid to these workers. However, learned assessing officer has levied the penalty of 5% of the total demand which worked out to Rs. 1434524.

“10.1 The appellant, being a public limited mainly engaged in the business of hotel management and consultancy, promoted M/s V Hotels Ltd. in the year 2001 for acquiring and setting up of hotels.

M/s V Hotels Ltd. purchased a hotel property in 2002 at Juhu known as Centaur Hotel, Juhu from Government of India under Government of India’s Divestment Programme. The hotel could not commence full scale operation because of problems. The hotel had 800 staff and filed petitions before Hon’ble Bombay High Court praying for VRS and pursuant to the directions of Hon’ble High Court the VRS amount quantified at Rs. 42 crore was required to be paid to the staff. Since the promoters could ‘hot arrange funds, they were left with no alternative but to sell the hotel in 2005 for which some purchasers were identified. But, the purchasers could not stick to their payment obligations for which disputes arose between M/s V Hotels Ltd. and the purchasers. The matter is now under Arbitration before Hon’ble Justice Mr. S.N. Variava (Retired Supreme Court Judge). After the property went into litigation, the operation of the hotel ceased after 31-3-2005.

Due to litigations on the property it has not been possible for the promoters to arrange finances required for restarting the operations of the hotel.

10.2 During 2007, the consortium of Banks which funded part of acquisition of the hotel pressurized for repayment of their dues and also proposed to initiate action under section 13(4) of the Securitisation and Reconstruction of Financial Assets and Enforcement of Security Interest Act, 2002 (SARFAESI Act). For fear of loosing the hotel and protect its investments, the appellant decided to sell the investment in Cox and Kings (India) Ltd. for a consideration of Rs. 43 crore. As a result of the sale of shares of the said company, capital gains liability arose on the appellant.

10.3 M/s V Hotels Ltd. had approached the appellant to make payment of Rs. 40 crore in order to make payments to Banks. It had anticipated that the arbitration will get resolved in September 2007 and assured to return the loans since prospect of generation of funds by it appeared bright as some investors were keen to invest in M/s V Hotels Ltd. Due to non-resolution of the arbitration proceedings, global downturn in economy and set-back faced by the hospitality industry during that period M/s V Hotels Ltd. failed to keep its commitments to return the loan as a result of which the self- assessment tax due for the assessment year 2007- 08 could not be paid by the appellant.

10.4 The appellant company is also not generating any income as seen from the P&L account furnished. The details of income are as under:

There are also no liquid assets to clear the demand as seen from the balance sheet as on 31-3-2009. The appellant has no asset out of which funds can be generated although it was fully aware of its tax liabilities. After a lot of efforts by the management, the appellant was finally able to make the payments of its tax dues as detailed in Para 5.4 above.

10.5 Due to the huge financial difficulties and various other problems (like employee’s non-cooperation, arbitration proceedings etc.) as explained in detail above, the appellant was unable to pay its self assessment tax before the filing of its Income Tax Return.”

Now the entire self assessment tax has been paid and the entire liability has been discharged. Thus, order of the learned Commissioner (Appeals) deleting the penalty is upheld. Consequently, the grounds raised by the revenue is dismissed.