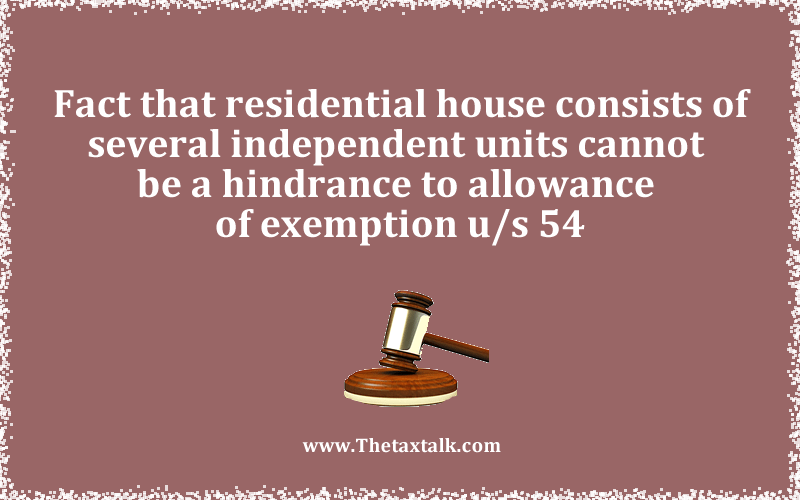 Prem Prakash Bhutani vs Assistant Commissioner Of Income … on 21 April, 2006

1. The assessee in this appeal is an individual deriving income from business capital gains and other sources. In the return he claimed exemption under Section 54 in respect of capital gains on the footing that he had acquired a residential house out of the sale proceeds of certain land and building owned by him in N-136, Panchshila Park, New Delhi. The AO noticed that the assessee had entered into an arrangement with a builder in respect of the property under which he was to receive five flats for himself and some cash consideration for giving the builder the right to develop the property, and that out of the five flats received the assessee had disposed of two flats and retained three flats for himself. According to the AO the benefit of Section 54 can be given only in respect of one residential house acquired by the assessee and not “for a spate of residential houses which he constructs out of the consideration received”, and accordingly granted deduction only in respect of one residential flat which came to Rs. 5,27,710. The balance of the sale consideration after deduction was brought to capital gains tax.

2. On appeal, the CIT (A) noted that the assessee retained three flats to be used for his residence as his married son along with his family and the widowed daughter and her family was living with him, that in all there were 8 bedrooms and two living and dining rooms, both in the ground floor and second floor and another hall in the basement which was occupied by the assessee’s family. He noted that the Allahabad High Court in Shiv Narain Chaudhari v. CWT has held that several self-occupied dwelling units which were contiguous and situated in the same compound and within the common boundary, having unity of structure, should be regarded as one residential house. He further found that a ration card had been issued to the assessee in 1996 where the names of the son, daughter-in-law and the grand daughter were included in the names as family members. He accordingly agreed in principle with the assessee that exemption under Section 54 cannot be confined to a single flat as was done by the AO. However, he directed that exemption be given in respect of two flats which can be taken as the residence of the assessee’s family as well as his son’s family. He directed the AO to recompute the capital gains accordingly.

3. The assessee is in further appeal to the Tribunal to point out that the order of the CIT(A) directing exemption in respect of two flats having been accepted by the Department and no appeal having been filed by it, the only question is whether the CIT (A) was right in substituting his opinion or assessment about the requirement of the family members of the assessee with regard to the residential house to restrict the exemption to two flats as against three flats claimed by the assessee. This line of reasoning appeals to us and the matter can possibly be disposed of in favour of the assessee on the short ground that the CIT (A) cannot substitute his opinion as to the requirements of the assessee for his residence. However, in deference to the arguments addressed before us, the wider canvass has got to be appreciated.

4. The assessee acquired the land (1200 sq. yards) on 8th May, 1967 and put up a two-storied residential building on the plot. On 5th Oct., 1992 he entered into a collaboration agreement with M/s Vidhi Constructions (P) Ltd. for remodelling the construction by making additions, improvements and construction of the ground, first, second and third floors after getting the plan sanctioned from the Municipal Corporation of Delhi. The building was accordingly constructed and the assessee was to receive one part of the building which was remodelled according to his specifications with a ground floor and three upper floors. The other part of the building was to be taken by the building company. On completion of construction, the assessee sold two flats and retained three and it is not in dispute that he was using them as his residence. The AO has been criticised by Mr. Kapila, the learned Counsel for the assessee, as having introduced a new concept called “residential unit” which is foreign to Section 54, to confine the claim of exemption to one residential unit. No doubt the section uses the expression “a residential house”, signifying perhaps that the exemption can be confined to one residential house and not more, but what is a residential house has not been defined in the section. Mr. Kapila says that there is nothing in the section to confine the exemption to a “residential unit” the equivalent of the modem-day independent flat-and that if regard is had to the opening words of the section, it hints that the residential house shall be “buildings or land appurtenant thereto” and that so long as the assessee acquires a building, which incidentally may be constructed, for the sake of convenience, in such a manner as to consist of several units which can be independently used as residence, the requirement of the section is satisfied. He contrasts the provisions of Section 23 as it stood at the relevant time to show that the words “residential units” were used therein but only to provide an incentive to housing projects. We find a good deal of sense in what Mr. Kapila says. A residential house has to be a building. But we see nothing in Section 54 which requires the building to be constructed in a particular manner. The only requirement is that it should be for the residential use as contrasted with commercial use. It is no longer the requirement that the assessee should reside in the house, as it used to be earlier. He may even let it out. If there is nothing in the section which requires that the residential house should be built in a particular manner, the IT authorities in our humble opinion cannot insist upon that condition. A person constructs a house according to his plans and requirements. He may have his own whims and fancies, even eccentricities in building a house. There may be compulsions. For instance, he may construct the house in such a manner that he may use the ground floor for his own residence and let out the first floor having a independent entry in order to augment his income, say, after retirement. He may build a house consisting of four bedrooms all in the ground floor (without any upper floor) in such a manner that an independent residential unit consisting of two or three bedrooms can be carved out with an independent entrance and exit and which can be let out. He may even arrange for his children and their family to stay there, so that they are nearby, an arrangement which can be mutually supportive. He may construct his residence in such a manner that in case of a future need he may be able to dispose of a part thereof as an independent house. There may be several such considerations for a person while constructing a residential house. We are unable to see how or why the physical structuring of the new residential house, whether it is lateral or vertical, should come in the way of considering the building as a residential house. The fact that the residential house consists of several independent units should not be an impediment to the allowance of the exemption under Section 54. That is neither expressly nor by necessary implication prohibited.

6. We ought to refer to an order of the Bombay Bench of the Tribunal in K.G. Vyas v. ITO (1986) 26 TTJ (Bom) 491 : (1986) 16 ITD 195 (Bom) in which a similar question arose. There the assessee sold his flat and acquired four flats in the same building-two in the first floor and one each in the second and third floors. The assessee was living in these flats with his family with a common kitchen and a common ration card. It was held that the exemption under Section 54 was available to the assessee since the condition that the assessee should have invested the sale proceeds in the purchase of a house for his own residence. It was observed that the fact that at a future date the assessee might divide the properties among the members of his family was of no relevance. It was noted that the family consisted of ten members and therefore the acquisition of four flats in the same building was commensurate with the requirements of the assessee. In para 5 the Tribunal noticed the objection of the Revenue that the flats were on different floors and were “self-contained residential units” but overruled the same on the ground that all of them were purchased in the assessee’s name. Reference was made to the judgment of the Allahabad High Court in Shiv Narain Chaudhari’s case (supra) where it was held that “a house may consist of more than one self-contained dwelling unit and that if there is unity of structure, the mere fact that such self-contained dwelling units are occupied by different persons, will not make that house into several houses”. These authorities are applicable to the case before us.

7. The appeal is accordingly allowed with no order as to costs.