Exp. connected with PE couldn’t be subject to taxation laws of contracting state 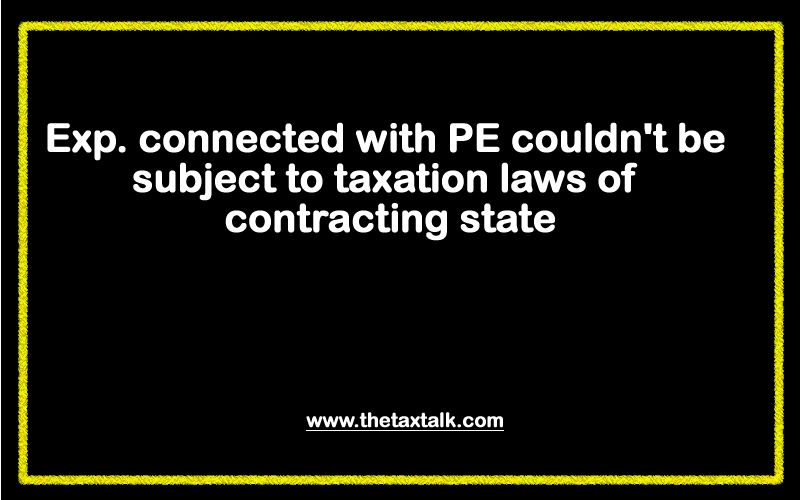 Exp. connected with PE couldn’t be subject to taxation laws of contracting state

Facts:
a) Assessee-company was a tax resident of Mauritius. It went to various projects in India for exploring business possibilities in the field of energy sector. It had PE in terms of article 5 of India-Mauritius DTAA.
b) Assessing Officer (AO) noted that the assessee could not furnish the details of names and address of its employees, duration of the stay of each employee in India and whether TDS had been deducted on salary paid to the said employees?. Thus, he disallowed the entire employee cost by invoking the provision of section 40(a)(i).
c) CIT(A) held that article 7(3) does not put any restriction on claim of expenses and, accordingly, the expenditure was to be allowed. Aggrieved-revenue filed the instant appeal before the ITAT.
The ITAT held in favour of assessee as under:
1) Para 3 of article 7 provides for the determination of profits of PE by allowing the deduction of expenses which are incurred for the purpose of business of the PE, including executive and general administrative expenses so incurred at place where the PE is situated.
2) Accordingly, all the expenses incurred for the purpose of the business of the PE were to be allowed. There was no restriction on the allowability of such expenses subject to any limitation of the taxation laws of the contracting State (India).
3) The phraseology used in article 7(3) is different from other treaties. For instance article 7(3) of Indo-US Treaty DTAA provides that deduction of expenses which were incurred for the purpose of business of the PE would be in accordance with provisions, subject to the limitation of the taxation laws of that State.
4) If in a treaty no such restriction has been provided for applying the limitation of the domestic taxation laws, then such limitation given under the Indian Income-tax Act can’t be imported in such an article.
5) If the expenditure had been incurred on the payment of salary or reimbursement of salary of the employees, then same had to be allowed while computing the profit and loss of the PE in full without any restriction on deductibility as per the provision of Income-tax Act. – [2018] 99 taxmann.com 158 (Delhi – Trib.)