Every word counts in the taxing provision 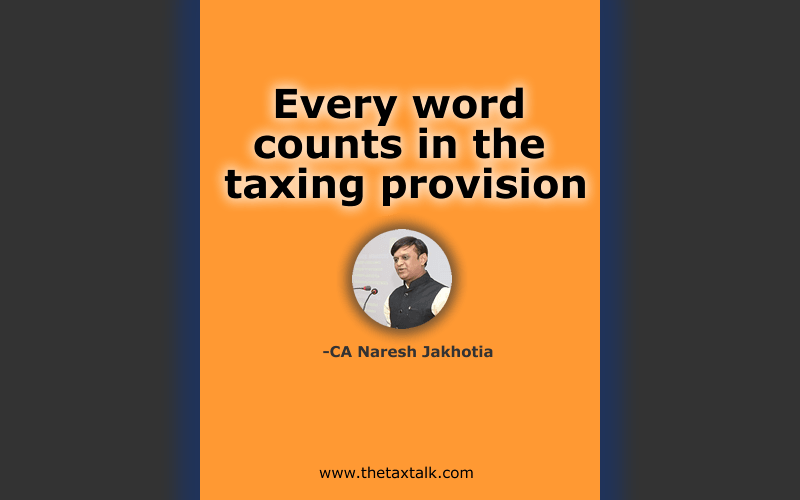 “This is a question too difficult for a mathematician. It should be asked of a philosopher” (when asked about completing his income tax form)” ― Albert Einstein

There is no such thing as logical or reasonable while interpreting the taxing provision. Every word counts when it comes to the interpretation of the tax statue. There are numerous provisions in the Income Tax Act-1961 where one will find outcome which may not in accordance with the intention of the legislature.

One such issue is in the taxation of Gift. Gift is not only a tool for conveying love and affection but also one of the most popular & commonly used tool for tax planning. By gifting the property or assets to other persons, subsequent incomes also get diverted. It has become all the more popular after abolition Gift Tax Act long back. However, the concept of taxing gift is almost reintroduced in new form by adding section 56(2)(vii)[Now, 56(2)(x)] in the Income Tax Act-1961 which make it taxable as  “Income from other Source” if the aggregate amount during the year exceeds Rs. 50,000/-. Amount received is not taxable if it is received in any of the following 4 situation:

(a) On the occasion of the marriage of an Individual

(b) Under a will or by way of inheritance

(c) In contemplation of death of the payer.

First three situations referred above are specific and related to any one particular event or occasion. The fourth one is wider in scope & implication. Gift received from any person other than “Relative” is taxable hands of recipient. Now, who are considered as “Relatives” for the purpose of above provision is also specified in the section itself. It says that the following categories of persons are considered as “Relative” of the individual receiving the

Though the persons involved are same in both the illustrations given above, the amount is not taxable first case and taxable in the second case. The transaction has to be viewed from the angel of recipient i.e., donee for each& every gift. One may surprisingly conclude that relative could be one sided business as far as tax treatment under section 56(2)(x) is concerned. The word used in section 56(2)(x) is “receives from” . Adding just three word “or given by” in section 56(2)(x) could have made the outcome logical. However, absence of these 3 words is making all the difference. True, every word counts in the tax statue.

Ignorance of law is certainly no excuse but, at the same time, there is no presumption in law that everybody knows the law.

Everything about Annual Information Statement (AIS)

Interesting case: Cost of acquisition to the assessee is not merely the amount paid to the vendors but also the cost of the borrowing made by him for the purpose of paying the vendor and obtaining the sale deed

Sum received from display of advertisement on assessee’s undergoing real estate project is a business income or house property income?

Payment of enhanced value of assets revalued by firm whether constitute capital asset and transfer of such asset whether capital gains chargeable under section 45(4) r/w s. 2(14) on retirement of some of partners?

Capital Gain Computation: Date of allotment should be taken as the date of acquisition for reckoning the assets as Long Term or Short Term Capital assets

Interesting Judgment: Whether extinguishing of right to carry out a speciality business is taxable as Capital Gain Income ?

Exemption from Capital Gain: Section 54 is a beneficial provision and is to be construed keeping in view the intention of the Legislature to give relief