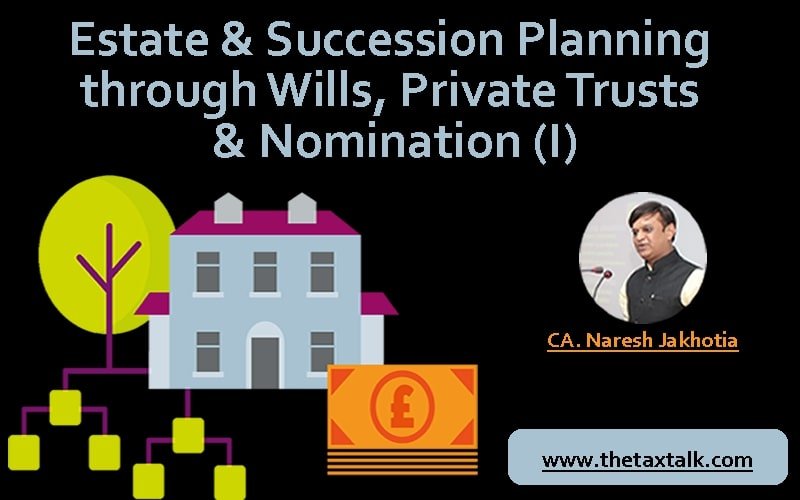 Wealth is built to be enjoyed and passed on to the next generation. It takes years to accumulate wealth. Careful succession planning of the estates & business would avoid the probable disruptions and conflicts amongst the family members. There are numerous instances where lack of succession planning has resulted in irreparably damage to the family glory and reputation. Wealth accumulated over generations has either been squandered or reached outsiders; endless litigation between the family members has taken up significant time and efforts. Taking conscious steps to protect this wealth as well as business considering the temperament & mindset of different family members ensures that legacies remain alive with minimum conflict & impact on business. Succession planning is a necessity and not an event or an option.

Before we discuss various options for succession planning through Will, Private Trust, etc, one need to know what if the person dies without making any will. If any person dies without making a “will”, it is referred to as intestate succession. The law of intestate succession is different for different communities. For instance, Hindu, Sikh, Buddhist and Jains are governed by Hindu Succession Act-1956 (HAS), Indian Succession Act would be applicable in case of Christian, Parsi, Jew whereas Muslim Law is applicable for Muslims.

Let us know the provision of the HAS if a Hindu dies intestate.

Hindu Male Dying Intestate (Without Will):
Under HSA, the property of an intestate Hindu male devolves on the following heirs in the order specified below:

The following 16 heirs are the Class I heirs under HSA:

The above Class I heirs take the property simultaneously in equal ratio and in priority succession to all other heirs. one may note that Mother is a class I heir whereas Father is not.

Cognates refer to the persons related but not wholly through males.

Hindu Female Dying Intestate (Without Will):

The property of an intestate Hindu female devolves on the following heirs in the order specified hereunder:

The succession is in the order specified above. Thus, the heirs in the first entry take the property simultaneously and in exclusion to all others and so on and so forth.

Above mode of succession in case of Hindu male comes into play only if the persons die intestate. The above process of succession is time consuming, complex, unplanned and doesn’t ensure the distribution of assets by choice. It doesn’t take care of the individual needs & contribution of the family members. Will, Private Trust, Nomination, etc could play an important role in effective & desired succession planning. We will discuss it in the next issue of The Tax Talk.