Estate & Succession planning through Will 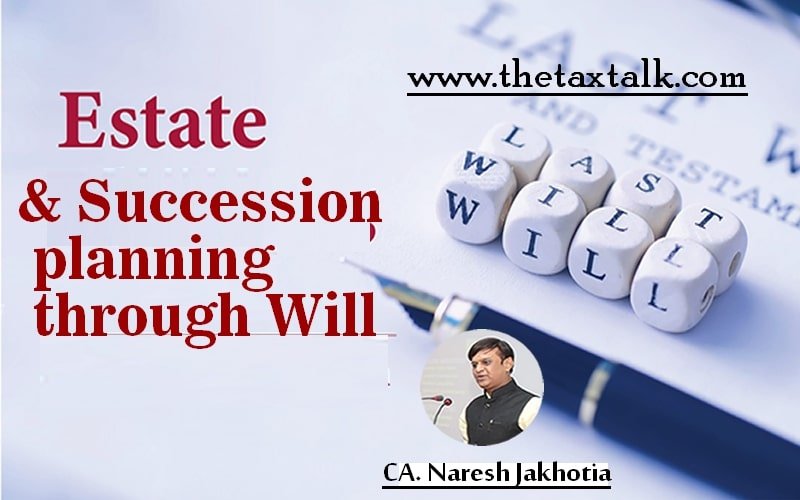 Estate & Succession planning through Will

There are only two things that are certain in life – Death & Tax.

Like it or not, these two things need to be admitted gracefully. A will is simply a legal document in which the person declares as to who will manage your estate after you die. Asking the person to prepare the will is often considered as if you are telling the person that his end is near. We all think & believe that it is too early to think about preparing a will. Unwillingness to accept death as part of life is the main reason for not making a will.  This pandemic & its impact has made us realize the fact that life is unpredictable and uncertain & it is sensible to prepare, earlier the better. Further, old-age comes with several physical and mental illnesses making a person incapable of doing the documentation in the desired way. Court statistics prove that will prepared at an old age often generates doubts & disputes later.

Advantage of making a will:

There are the numerous benefits of making a will & serious consequences to follow if the will is not prepared. Let us know about it:

Registration of a Will is not at all compulsory. However, if the Will is registered, it is more strong & authentic evidence as to its genuineness. “Will”can be registered with the registrar/ sub-registrar by paying a nominal registration fee. It requires the person to visit the registrar’s office along with 2 witnesses who are trustworthy.

‘Probate’ and its importance:

Non registration of “Will” often results in a questioning of its authenticity. When the will is not registered or questioned, normally a document called “Probate of Will” is required from Court. Probate is the copy of the will given to the executor with a certificate under the seal of the court and signed by one of the registrars certifying that the will has been proved. Probate is a way to certify that the Will is authentic. The application for probate has to be made along with a copy of the last Will and testament of the deceased to a court of competent jurisdiction. To avoid the probable requirements of probate, it is advisable that the will be registered with the registrar.

Tags: Estate & Succession planning through Will