Drafting a Will: Points & Precautions 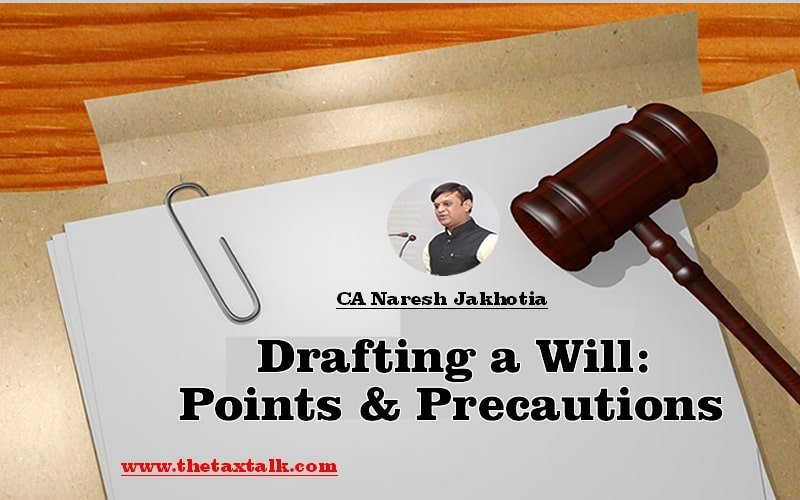 Drafting a Will:  Points & Precautions

Not only emotional, will is a very important instrument in the hands of a taxpayer for the purpose of tax planning.

Without will, assets get distributed as per the law of inheritance. Wills can change the normal pattern of inheritances & distribution. However, there is certain essential requirements for a proper will which one must take care while drafting the will.

It may be noted that the law of wills with regard to execution, attestation, revocation and interpretation of wills by Hindus, Sikhs or Buddhists (except wills by Mohammedans) is governed by the Indian Succession Act, 1925.

The document of will is a unilateral act.

The legatee has the choice to accept the bequest made to him or refuse to accept it, as the will of a person cannot be imposed upon any person without his consent and acceptance.

However, he cannot accept it partially without the attached liabilities.

For a proper and valid will, following essential requirements & points may be noted:

1.   Will should be contained the following:
(a) Testator’s name, age, father’s name and address
(b) A declaration that the person is making it voluntarily, in sound mind and without any fraud, coercion, stress and strain and out of his free will.
(c) It should contain the names of all legal heirs & dependants
(d) It should also contain the nature and description of all the properties of the maker with the best possible elaborated details.
(e) Will should also have a clause to convey the properties not incorporated in the will should be given to which person. It is referred to as residuary clause in the will.
(f) Signature of testator in the presence of two attesting witnesses be made.
(g) Every correction be signed by testator and witnesses.
(h) As a tax planning measure for legal heir, Hindu undivided family (HUF) can be created by a will.

2. Will is going to take effect after the death of a testator.

3. Will once prepared can be modified or altered any time before death.

4. It can be revoked as well by the testator.

5. After the death of the testator, his last will prevails.

6. Any male or female who is a major and of sound mind can make a will.

7. Will has to be free from fraud or coercion.

8. A will should incorporate all the properties which are owned and possessed by the maker.

10.It should contain the wishes of the testator in plain and unambiguous language.

11.Will should be properly signed by the maker & it should be attested by normaly two witnesses.

12.Registration of will is not compulsory but its optional.

13.Will cannot be made orally, unless it is a privileged will as per section 57 of Indian Succession Act. A privileged will can be made by a soldier, airman or any mariner at sea, who is engaged in warfare. (Section 55 of the Act).

14.A testator has to make a provision for the maintenance of his wife.