AO has to pass speaking order while rejecting petition for stay of demand u/s 220(6): Calcutta High Court further directed for early disposal of such cases. 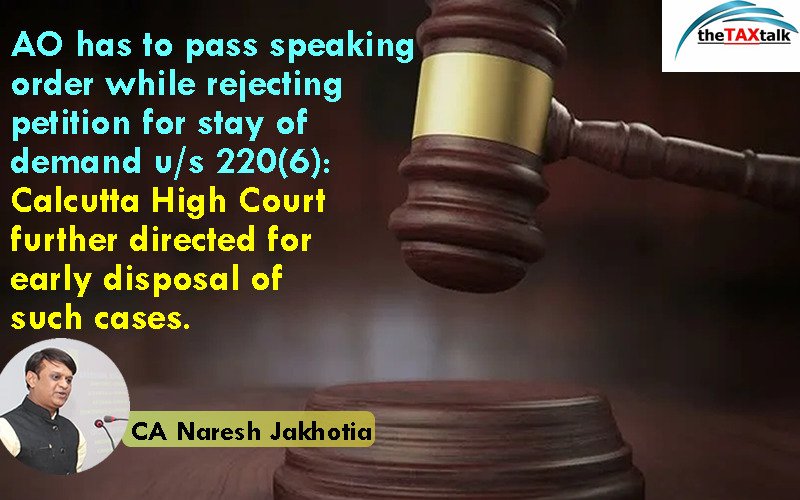 AO has to pass speaking order while rejecting petition for stay of demand u/s 220(6):

Calcutta High court in the case of Majumder Global IP Vs Union of India & Ors has held that the Forum-Calcutta High Court (WP No 4253 of 2022) AO has to pass speaking order while rejecting petition for stay of demand u/s 220(6): Calcutta High Court further directed for early disposal of such cases.

The Calcutta high court in this case was considering the Writ petition under Article 226 against a non speaking order u/s 220(6) rejecting stay of demand as well as the fact that even though the appeal was filed before CIT (Appeals) in the month of October 2021, the same was yet to be heard.

The Ld Judge after hearing the arguments of the assessee set aside the order u/s 220(6) with a direction to pass a speaking order within two weeks of the communication of the order.

The Court also requested the CIT(Appeals) to dispose off the pending appeal preferably within 3 weeks.

This order is really be of a great help for all those matters where the stay of demand is being rejected in a blanket manner. It may be noted that the Bombay High Court and other courts have clearly laid down the law that the order has to be passed taking into account not only the merits of the matter but financial hardship as well.

Also wherever the CIT(Appeal) hearing is not being fixed in high demand cases, this order will be very useful as the court has ordered for early hearing in such cases.

Heard both the parties.

Facts involved in the instant case in brief is that the

petitioner being aggrieved by the assessment order in question filed the statutory appeal before the Commissioner of Income Tax (Appeals) sometimes in the month of October 25, 2021 and petitioner makes an innocuous prayer for direction upon the CIT (Appeals) to dispose the aforesaid appeal expeditiously. Petitioner is further aggrieved by the impugned order dated 17th February, 2022 rejecting the petitioner’s application under Section 220(6) of the Income Tax Act, 1961 on the ground that the same is non-speaking order and contentions raised by the petitioner has not at all been dealt with in the impugned order of rejection and on perusal of the aforesaid impugned order dated 17th February, 2022, I find

that such allegation of the petitioner is true since it does not contain any discussion on the issues and contentions raised by the petitioner in his aforesaid application under Section 220 (6) of the Income Tax Act, 1961.

Considering the submission of the parties, this writ petition is disposed of by setting aside the impugned order dated 17th February, 2022 with a direction upon the Assessing Officer concerned to pass a fresh and speaking order in accordance with law and after giving an opportunity of hearing to the petitioner or its authorised representatives within two weeks from the date of communication of this order. Further, CIT (Appeals) is requested to dispose of the pending appeal in question expeditiously and preferably within three months.

It is clarified that this Court has not gone into the merit of the aforesaid applications of the petitioner under Section 220 (6) of the Act and the Assessing Officer concerned while disposing the same shall act strictly in accordance with law.

With this observation and direction, this writ petition being WPA No.4253 of 2022 stands disposed of.