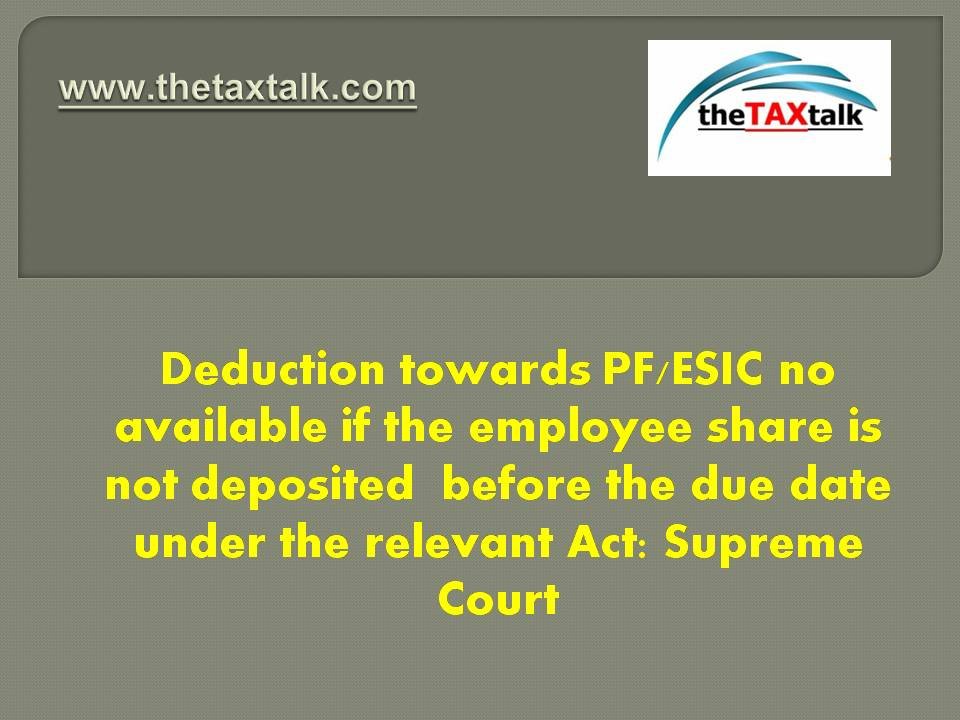 Deduction towards PF/ESIC no available if the employee share is not deposited  before the due date under the relevant Act: Supreme Court

Finally , the biggest controversy is settled by the Supreme Court in the case of Checkmate Services Pvt Ltd. VS CIT.

The Assessing Officers during assessment had ruled that the appellants had belatedly deposited their employees’ contribution towards the EPF and ESI, considering the due dates under the relevant acts and regulations. Consequently, the AO ruled that by virtue of Section 36(1)(va) read with Section 2(24)(x) of the IT Act, such sums received by the appellants constituted “income”. Those amounts could not have been allowed as deductions under Section 36(1)(va) of the IT Act when the payment was made beyond the relevant due date under the respective acts. In other words, as per the AO, as such sums were paid beyond the due dates as prescribed under the respective acts, the right to claim such sums as allowable deduction while computing the income was lost forever.

The assessees’ pleas were unsuccessful before the Income Tax Appellate Tribunal. Ultimately, in the case of the impugned judgment, the Gujarat High Court too rejected its pleas.

SC granted special leave to appeal in all these cases.

The scope and effect of the newly inserted Section 36(1)(va) and the newly inserted provisos to Section 43B of the IT Act were elaborated in a Central Board of Direct Taxes (hereinafter, “CBDT”) circular bearing No. 495. The relevant extracts of the circular are as follows:

“Measures of penalising employers who misutilised contributions to the provident fund or any fund set up under the provisions of the Employees’ State Insurance Act, 1948, or any other fund for welfare of employees 12.1 The existing provisions provide for a deduction in respect of any payment by way of contribution to a provident fund or superannuation fund or any other fund for welfare of employees in the year in which the liability is actually discharged [section 438]. The effect of the amendment brought about by the Finance Act, is that no deduction will be allowed in the assessment of the employer(s) unless such contribution is paid to the fund on or before the “due date”. Due date means the date by which an employer is required to credit the “contribution” to the employee’s account in the relevant fund under the provisions of any law or term of contract of service or otherwise [Explanation to section 36(1 )(va) of the Finance Act]).”

Submission before the courts were as under:

The court observations were as under: