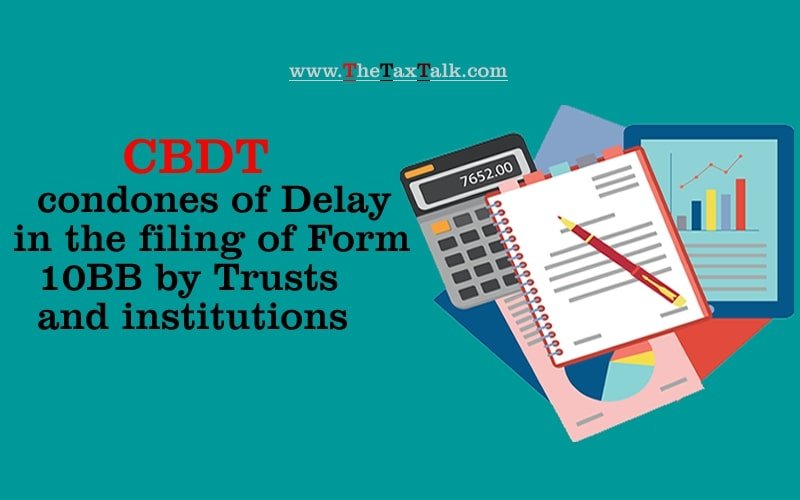 The Central Board of Direct Taxes (CBDT) has granted con donation for the delay in filing of Form 10BB by Trusts and Institutions like educational and medical universities or hospitals for the Assessment Year 2016-17 and the subsequent years. Earlier, there was a con donation that was given for delay in submission of Form No. 10B.

The circulars say that the Board has received various Representations stating that Form No. 10BB could not be filed along with the return of income for Assessment Year 2016-17 and Assessment Year 2017-18. It has been requested that the delay in filing of Form No 10BB may be condoned. The CBDT with a view to expedite the disposal of applications filed by such entities for condoning the delay and in exercise of the powers conferred under section 119(2) (b) of the Act, the Board issued directions.

Further, all such applications shall be disposed of by March 31, 2021.

The Board has directed that if there is delay of up to 365 days in filing Form No. 10BB for Assessment Year 2018-19 or for any subsequent Assessment Years, the Commissioners of Income tax are authorized to admit such belated applications of condonation of delay under section 119(2) of the Income-tax Act, 1961 and decide on merits.

“The Commissioners of Income-tax shall, while entertaining such belated applications in filing Form No. 10BB, satisfy themselves that the applicant was prevented by reasonable cause from filing such application within the stipulated time,”

The copy of the CBDT order is attached herewith.